LUCKY SEVERSON, correspondent: This is the Brooke Army Medical Center in San Antonio, the military’s largest and most advanced medical facility. It’s where doctors send some of the most seriously burned and wounded soldiers to recover, sometimes with artificial limbs. Since the beginning of the Iraq and Afghanistan wars, thousands of soldiers, like Private Carlos Gomez, have suffered injuries like his. He was on a scouting mission and was seriously wounded when his vehicle ran over a roadside bomb in Afghanistan earlier this year.

PVT CARLOS GOMEZ: Well, the blast, it shot us straight up in the air so the impact actually broke my left leg. It shattered my heel and my bones down my right, left leg, I mean, and my right leg got crushed. They couldn’t save it anymore so they had to amputate it here at Brooke Army Medical Center.

SEVERSON: Two other soldiers were wounded in the blast. One was killed. At first Gomez wasn’t sure he wanted to live. 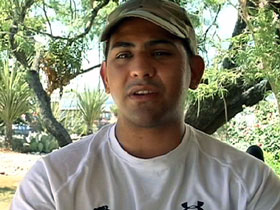 PVT GOMEZ: I woke up, you know, not really knowing what happened still. I didn’t know that my leg was amputated, and when I was fully, you know, aware of what’s going on, I saw my leg, yeah, I broke down in tears, you know, and I hated my life, and I didn’t want nothing to do with it.

SEVERSON: The first battle many seriously wounded soldiers face is whether they want to go on with their lives and then endure the long, painful process of healing, often alone. Doctors have learned that wounded soldiers heal faster and more completely when they have family around them. That’s what happens here at the Warrior and Family Support Center in San Antonio. It is the only one of its kind. It was the dream of Judith Markelz, and now she’s the director.

JUDITH MARKELZ (Warrior Family Support Center Program Manager): We attempt to form a home away from home for wounded warriors and their families, to help them feel some kind of connection to each other, things for them to do every day to take them outside of their own world and help them transition back to active duty or to the civilian community where they’re going to have to adjust and make a lot of changes.

SEVERSON: Although it’s located on an army post, the Warrior and Family Support Center is funded entirely from private donations and staffed by about 150 volunteers. Families live in apartments close by, so they can help soldiers accept what is called “the new normal,” which means their life will never be quite the same again. Sometimes family is as important as the medical care. 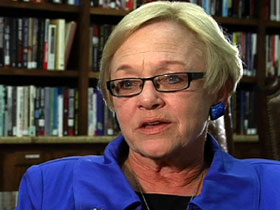 SEVERSON: Bryant Casteel is a Baptist chaplain at the center. He says the most important part of his job is simply to be there.

CHAPLAIN (CAPT) BRYANT CASTEEL: You know, sometimes you want to find the right words. I found many times when dealing with soldiers there’s not a right word. There’s no right way to tell someone you’re going to be okay. And some say, hey, can you pray for me chaplain? You know, can you let me know things are going to be all right? I can’t promise you, but I can promise you I’ll be here to support you.

SEVERSON: One of the favorite nights around here is bingo night. For a while they forget that the war for them is not yet over. For those who think this must be a very sad place, Judith Markelz says the opposite is true. She says it’s a place of hope, which is the name of the sculpture hanging in the center which was created by a staff sergeant who had 29 surgeries while he was at Brooke. She says the wounded may cry in their beds at night, but never in public. 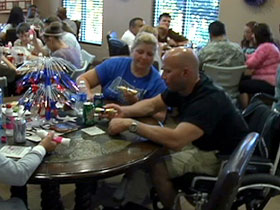 MARKELZ: These young men and women do not want your sympathy. They want your support and in the help of their healing, because they’re going to be okay. They did what they were commanded to do, and they did it with great integrity and honor.

SEVERSON: And many paid a huge price, like Master Sergeant Doug Reed with the Ohio National Guard, critically wounded by a rocket-propelled grenade in Afghanistan in 2010. He’s the father of seven kids, here with his wife, Jana.

MSG DOUG REED: The angel of death had me in his arms, and Jesus said, “No, I’m not done with you.” So they fought over me, and my jaw came off.

JANA REED: He was very close to death, in the fact that I mean with every surgery they didn’t know if he would ever wake up or ever become independent. And so that’s when I just had to say, “Okay, God, I am not in control. The doctors are not in control. But you are in control, and you are going to have to fix this, if this is what you want.”

SEVERSON: And when he finally did wake up, for two months he didn’t know his wife. He didn’t even know who he was. 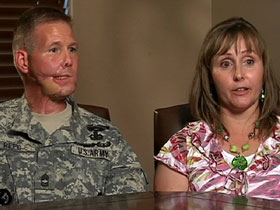 JANA REED: But when our kids walked in the door he gave them a hug, and he called them all by their pet names, and so the kids began to cry, not because of what they saw, but because it’s dad, he does know me, when the doctors were saying we don’t think he’ll know you.

MSG REED: I didn’t know what I looked like. It couldn’t have been good, and they don’t see that. They don’t care if I have teeth or not or my jaw is out of shape now or anything else. What they cared about is I was still alive. I was still with them.

MARKELZ: This is not a singular effort. It involved families, children, wives, mothers. An injury or a death is like dropping a rock in the water, and the ripples go forever, and they affect everyone with whom they ever came in contact.

SEVERSON: Private Gomez has two children, and he says he knows things will get better when he gets his prosthesis, but in the meantime his seven-year-old son is having a hard time.

PVT GOMEZ: It’s affecting him. I know definitely it’s affecting him. You know, he has to help out his dad a lot with stuff that I can’t do, like picking stuff up for me, you know, putting on my shoes, stuff like that. 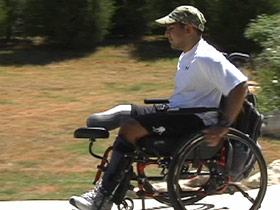 SEVERSON: Gomez says he’s always been religious, but one of the few times he didn’t have time to pray was when he rushed out on a mission in the middle of the night, the mission that cost him his leg. He says the war has not cost him his faith.

PVT GOMEZ: I don’t question God, not one day, you know, why this happened to me. I thank him actually, because it could have been the opposite, you know. I could have paid the ultimate sacrifice and passed away. It was because of him I’m still sitting here talking to you right now.

SEVERSON: Jana Reed says her faith and her husband’s are actually stronger.

JANA REED: Because every day we have a miracle that has been answered, and some people might say, oh, it’s a coincidence, but we’ve just had too many coincidences in the pasts 16 months that I do not accept it. It is not a coincidence.

SEVERSON: Chaplain Casteel says he has seen how the Warrior and Family Support Center has helped soldiers get better quicker. But he worries about what happens when the soldiers go home. 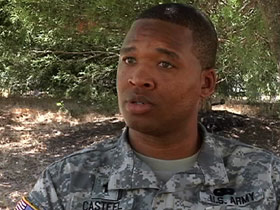 CH CASTEEL: When you walk around here, you don’t feel like you’re different. You don’t feel like, wow, someone’s staring at me or looking at me like I’m strange, and so I think here for a soldier it can be safe. Now when they leave this environment, going back to their home of record, then it could be a little more challenging, and I think that anxiety rises again for the soldier: Hey, will I be accepted?

SEVERSON: There was a time when wounded soldiers returning from the Vietnam War received more hostility than community support. But times have changed.

SEVERSON: She says that there are now other warrior and family support centers being built around the country modeled after the one here.