LAWTON: Growing numbers of leaders from across the religious spectrum have been supporting Occupy Wall Street’s protest against greed and economic inequity.

REV. MICHAEL ELLICK, Judson Memorial Church, NY: This is not just a jobs issue. This is not only a health care issue or a pension issue. This is also a spiritual issue of the nature of what has happened in the United States and how we function as a people together. And that is very, very, much a matter of moral concern, not only to my Christian tradition but to Islam, and to Judaism, to Buddhism. 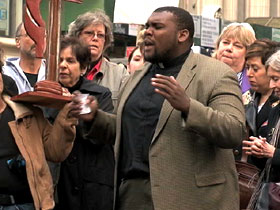 LAWTON: There have been regular interfaith prayer services at the park. And religious groups are also providing practical help by donating tents, food and money. They’ve been opening their facilities to the protesters, giving logistical advice and helping to get the message out.

ELLICK: Churches are an excellent place to organize this kind of information because we’re under the radar of commerce or of government.

LAWTON: Many say there is a prominent spiritual dimension to what’s been happening. Inside Zuccotti Park is a makeshift community altar, where protestors of all faiths come to pray or meditate. In several cities, protest chaplains—many of them seminary students—minster to the protesters.

ERICA RICHMOND, Protest Chaplain: We are here to provide a religious presence. We are here to listen to people, to hear what’s on their hearts. And we’re here to pray with people. And people do come up to us and ask us to sit with them in prayer, because people are in crisis and that’s why we are all here.

LAWTON: On this Sunday, United Methodists led a communion service. Participants said concern for economic justice is a core teaching of their faith. 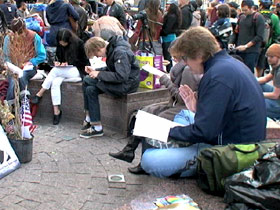 REV. K KARPEN, Church of St. Paul and St. Andrew, NY: The Bible is all about just a fairer shake for people and God’s concern for all of God’s children, not just a small segment of the population.

LAWTON: Some religious conservatives have criticized the faith-based support of Occupy Wall Street calling it a 60’s style, leftist effort to redistribute wealth. The Family Research Council urged its members to pray that God would prevent what it called “these radical organizers from stirring revolution.” But faith leaders at the Wall Street protests deny any political agenda.

KARPEN: It’s a broad movement of religious groups to support what’s going on and really to support the conversation, not to take a particular side or another side, but just to say these are the things that we need to talk about.

And they say it’s only going to spread.

ELLICK: What’s very, very real is the frustration. And if people don’t think that’s real, if people don’t think that reflects a real existential reality for the majority of Americans, the faith communities see it. Because we are who they come to when mom can’t pay rent, when the immigration officers steal grandma and there’s no one home. I mean, we’re who they come to. So for us it is an obvious, immediate, moral imperative.