Read an excerpt from OUR DIVIDED POLITICAL HEART by E. J. Dionne

KIM LAWTON, correspondent: Celebration of American liberty is important, but author and commentator E.J. Dionne says liberty not the full picture of our national character. In his new book, Our Divided Political Heart, Dionne argues that a strong impulse toward community is also part of the American story.

E.J. DIONNE, J.R., author, Our Divided Political Heart: We often forget that the first word of the Constitution of the United States is not the word “I,” it’s the word “we.” We, the people of the United States. And the preamble sets forth a series of common goals, not individual goals. We are not just “I”s out there, interested in our own liberty–although we are. But we are also “we”s, a “we” who are trying to preserve this great experiment in self-government.

LAWTON: According to Dionne, a quote “web of social bonds and mutual obligations” has always tied Americans together. The often delicate balance between individualism and community is part of what he says “philosophically and spiritually” makes us Americans.

DIONNE: I think right from the beginning of our republic, we’ve been torn by this tension between individualism and community. And individualism and liberty is a very important part of who we are and my book is not intended to deny the role of liberty. But I think we too often tell our story almost entirely on the individualistic side. And we forget about the importance of what you might call communitarian ideas. 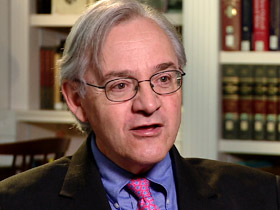 LAWTON: Dionne is a Roman Catholic who describes himself as politically progressive. His thinking about these issues has been influenced by the Catholic teaching on advancing “the common good.” But he says communitarian ideals are also embedded in the notion that there is something special, or exceptional, about America. He says that’s rooted in Scripture, and early Puritan beliefs.

DIONNE: When you go back and look at that great John Winthrop speech back in 1630 that Ronald Reagan liked to quote when he talked about a shining city on a hill. Winthrop talked about a city set upon a hill and he talked about how we must labor together, suffer together, have joy together, always being part of one body. And then there is also a small “R” republican tradition which sees self-government not about perusing your own self-interest but about the joys and satisfactions and obligations of governing together in the common interest.

LAWTON: Dionne believes our current atmosphere of political division and gridlock is due to an imbalance between individualism and community. And for this, he places a lot of blame on the Tea Party.

DIONNE: I think right now we are having a big argument as a country and are having trouble agreeing because I think one side in our debate wants to blow up that consensus and replace it with a kind of radically individualistic approach. 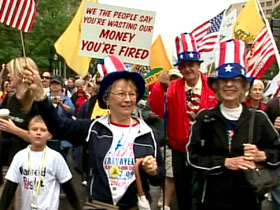 LAWTON: While many Tea Party members say it’s big government that has gotten out of balance, Dionne believes there is–and always will be–a legitimate role for the government in advancing the common good. At the same time, he acknowledges that government and community are not the same thing, that other institutions, including faith-based groups, have a role to play as well. Despite his strong criticism, Dionne commends the Tea Party for highlighting the values of the nation’s founders. And he takes his fellow liberals to task for often ignoring that.

DIONNE: I do think we need to have an argument about our history. And it’s bothered me as a progressive or a liberal that I don’t think that we have engaged in this argument about American history enough, we haven’t claimed our history as we should. Progressivism is as red, white, and blue in our history as conservatism.

LAWTON: Dionne says the debate about individualism has implications for religion and politics. 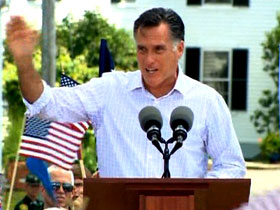 LAWTON: Dionne believes in the upcoming election, both Democrats and Republicans have challenges with religion. He says during the last campaign, President Obama frequently used religious references about promoting the common good and by doing so, appealed to a broad range of faith-based voters.

DIONNE: I think since his election, there was some emphasis taken off this. I think for a fair number of liberals and Democrats, they figured, “alright we solved this problem in ’08.” And I think there was some backing away from this work. And I think that is something they are trying to catch up on in the middle of a political campaign.

LAWTON: While Mitt Romney frequently talks about what he calls the greatness of America, he has avoided specifically connecting that to his Mormon faith. In fact, he has not spoken at length about his personal faith since a speech about religious tolerance during the last campaign.

DIONNE: He made an effort at it in 2007, which didn’t work well, and I think he may feel burned, Mitt Romney, by the failure of that effort in 2007. So, there are all kinds of forces working against these candidates addressing these questions and yet I think it’s, because religion is always there below the surface in our politics, I think it is better for us to address them out front and candidly.

DIONNE: I thought that perhaps by highlighting that our heart, in a way, was divided from the beginning, it might become a little bit more possible for each of us to see ourselves in the other. And so while the book very much has a point of view, it also has, at least inherent in it, a hope that we might take a little bit of a step outside ourselves and say if these two aspects really define us all, can’t we have at least some kind of dialogue about how we move forward as a country.

“The American Creed and Its Duality” 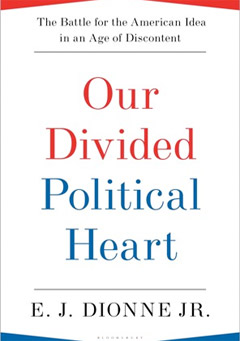 A conservatism without a strong communal and compassionate side will be untrue to its intellectual roots, unfaithful to the Christian allegiances of so many of its supporters, and disconnected from some of the most vital streams of conservative thought and feeling in American history. Similarly, a Republican Party that cuts itself off from the tradition of republican nationalism embodied by Hamilton, Clay, Lincoln, and Theodore Roosevelt will not only be abandoning the ideas that gave it life and purpose. It will also squander the opportunity to help infuse the next American consensus with the particular blend of entrepreneurialism and public purpose that the past’s best Republican leaders always advanced. My concern is that instead of seeking a consensual balance between our libertarian and communal sides, Republicans will continue to push for a one-sided settlement in which government recedes, the nurturing of community is relegated to a purely private endeavor, and the market is allowed to operate with little oversight or public accountability. Such an approach may command occasional majorities. But it will never produce the larger consensus required to save us from many years of polarization and angry discontent.

It would be tragic if conservatives and Republicans sacrificed their great traditions on the altar of an individualism that disdains government, downplays communal obligations, and sees the economic market not simply as an efficient mechanism for the production of goods but also as the ultimate arbiter of what should be valued.

Although the 2012 Republican primaries seemed to push the party even farther to the right, I would like to think that these fears are misplaced. If nothing else, pure pragmatism and electoral calculation may eventually militate against the dangers I see now. There have been signs in the polls of rising opposition to the Tea Party, and this may nudge the realists among our conservative politicians toward a new appreciation for moderation and balance. They might begin to soften the edges of their individualism and to remember their communal impulses. Perhaps they will decide that the American social insurance system is too popular to be overturned and that modern capitalism is too complicated to be allowed to run with minimal supervision and few safeguards.

What I do know is that we will not restore our greatness as a nation or heal our political wounds unless we acknowledge both sides of our national character. Our history is compelling, after all, because we are neither a simple nor a single-minded people.

At the end of a book insisting that no single trait can be seen as defining us, some readers might be tempted to write off Americans as philosophically contradictory and hopelessly opportunistic in our values and commitments. But to do so would be to misread both America and human nature. Most Americans are aware of their contradictions. The dualities of the American creed and the balances we seek to strike reflect an underlying realism about our conflicting desires and hopes—and about the difficulty of arriving at any settlement that can permanently resolve these tensions. We refer to the “American experiment” for a reason: we are an experimental people constantly searching for provisional answers. The British philosopher Isaiah Berlin has argued that “the very idea of the perfect world in which all good things are realized” is both “incomprehensible” and “conceptually incoherent.” Americans have largely been saved from the idea that we could create a perfect world. But we have also been saved by the idea that we can create a better one.

From “Our Divided Political Heart: The Battle for the American Idea in an Age of Discontent” by E. J. Dionne (Bloomsbury USA, 2012)