LUCKY SEVERSON: Early morning in a remote part of Tanzania at the foot of Ol Doinyo Lengai, known to the Masai as the Mountain of God, the center of their universe. When it spews lava, the Masai think God is angry. The last angry eruption was in 2007. Legend has it that centuries ago, God dropped cows from the sky as a gift to the Masai and now all the cows on earth belong to them.

Christian missionaries have proselytized the Masai for over 150 years with little success. But within the last decade, the tribe started converting. Now as many as a quarter of the Masai have become Christians.

GARY WOODS: Through this area we’ve had 700 new Christians in the last two years.

SEVERSON: Gary Woods has been preaching in the bush for 25 years.

SEVERSON: In the small villages, or Bomas, that speckle the countryside, it’s as if time has stood in place, although these traditionally nomadic people are no longer quite as leery of outsiders. 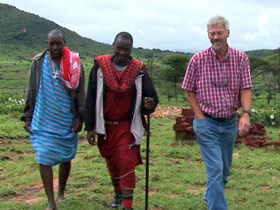 WOODS: I remember one day when I first came here I heard two ladies talking and they said, is it an animal or what is it. Look at, he has hair on his arms. They were trying to figure out what I was cause they’d never seen a white man before.

SEVERSON: Woods is missionary with a U.S. based non-denominational organization called Christian Missionary Fellowship, or CMF. They call what they do “planting churches.”

WOODS: We empower national Masai to do the ministry. I didn’t start any of these churches. I’m not the leader of any of these churches. But we’ve trained these people so that they could move out and do it. When a Masai comes into a community it doesn’t quite, it doesn’t cause a stir, like when I come. When I come everybody is oh, the White man’s here. But when they come they know the culture, the language, and it’s easier to integrate into the community.

SEVERSON: (speaking to Joseph Nekenia Ngida) This is one of your churches Joseph?

SEVERSON: This is Joseph, one of CMF’s planted pastors. He says his church is budding. 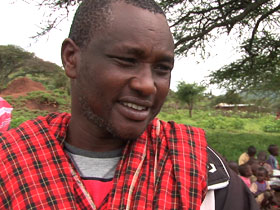 PASTOR JOSEPH: We started with 3 people.

SEVERSON: How long ago?

PASTOR JOSEPH: One year ago.

SEVERSON: And now you have 58?

SEVERSON: Before he converted, Joseph, like all young Masai men, served a period of time as a hunter-warrior for the tribe.

(speaking to Ngida): Did you ever kill a lion?

PASTOR JOSEPH: No, I kill a leopard.

SEVERSON: A leopard with a spear?

PASTOR JOSEPH: With a spear. Yeah.

SEVERSON: Oh, that must have been very scary.

SEVERSON: Until a new tiny school can be built, the classroom for these young orphans of mother’s with AIDS is under an acacia tree. Pastor Joseph said he would rather have the church take care of them than put them in a state orphanage, of which there are many. 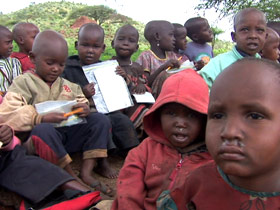 (speaking to Pastor Joseph): So you have two missions here. One mission is to help people learn to live better? Another mission is to convert people to Christianity? Is one more important than the other?

PASTOR JOSEPH: No. We normally say it is holistic, so if you treat one side and leave another side, it is like dividing your body, so it is holistic.

WOODS: We want to make the people have a better lifestyle but we want them to know Jesus Christ because there’s a life after this one.

SEVERSON: Converting to Christianity Is a big step for a traditional Masai, one that can have significant and painful consequences. Jacob Loserian is a Masai and a convert. 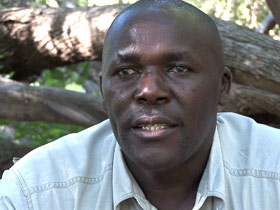 SEVERSON: Jacob says what convinces and converts Masai is the promise of something better.

SEVERSON: The good things may have more to do with culture than religion. Traditionally the Masai eat meat almost exclusively. Vegetables are not part of their diet. Among Christian Masai that’s no longer true

WOODS: They have a proverb that says that God would be angry with you if you scratch the earth or, you know, did some digging. We can see right here, these people have broken that proverb and they planted and now they’re taking care of themselves, able to feed themselves.

SEVERSON: These young are men attired and painted this way because they were recently circumcised. In the Masai culture, girls also must go through the painful process. But now, among the Christians, this no longer happens. Those who have benefited the most may be women.

WOODS: Masai culture, the women are just a possession. It’s something that they own like their donkeys or sheep, their goats, cattle. And I asked a man why, how many donkey he had and he said he didn’t have donkeys, ’cause he had five wives. 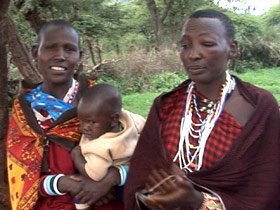 WOODS: They begin to treat their families different. We see husbands playing with their children. We see families caring about each other in a way they never did before.

SEVERSON: These are people who worship a volcano, live in constant fear of evil spirits, throw milk at the sky to thank the spirit God, make animal sacrifices at the base of a fig tree.

LOSERIAN: The Masai people are afraid especially for the owl. When the owl come, you know, fly, flying up on the house, then start make the sound, then the Masai, they are afraid, especially when they have a sick person, then they’ll be afraid that maybe this person is going to die.

SEVERSON: And when a person does die…

WOODS: What they traditionally did with dead bodies is they wrap them up in a sheet like that. The put them out in the bush here for the hyenas. The hyenas eat everything.

SEVERSON: To call the ruts we were on roads is an gross exaggeration. And the further into the bush we went, the worse they got. 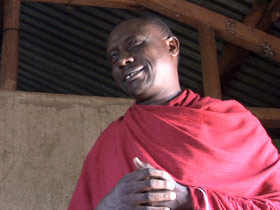 We were invited to a Masai village for a goat barbeque which is a special privilege for outsiders. But the road is so washed out and after hours of digging, we just can’t make it. So we’re going to have to turn around for the long, rutty, bumpy ride home.

But then, with the help of some Masai warriors, we were on our way again.

The village chief here, James, is the only one in the village to live in a cement house. He’s an important man, and a converted Christian.

WOODS: You don’t drink this everyday, but when a man goes on a safari, when he comes home, his wife will have sour milk for him to drink. So now we get some special treat here.

SEVERSON: Becoming a Christian was particularly difficult for James who’s father is a witch doctor, a practice James now believes comes through the devil.

JAMES: The witch doctor uses roots of many kinds of trees to bewitch people. There is a very big difference. Because a miracle from God is through prayer.

SEVERSON: At the barbeque the women stood by and watched as the men ate the goat, and James talked about being a Christian and how painful it’s been to be cut off from his family and friends. Most no longer attend his barbeques. Still he insists he’ll remain a Christian because, he says he now knows where to get his prayers answered, and it’s not a volcano.