RON HANSEN: A reading of the holy Gospel according to Matthew.

CONGREGATION: Glory be to our Lord.

BOB FAW, correspondent: Nearly every day, as he has for most of his adult life, Ron Hansen attends Mass. For this deacon at Saint Joseph of Cupertino parish in California, the ceremony brings both comfort and renewal.

RON HANSEN: I find nourishment in it. It’s a way of being quiet for a while and to let my mind focus on just communication with God.

FAW: Hansen’s religious sensibility isn’t limited to rituals like this. It also infuses all eight novels written by this highly acclaimed author.

(to Hansen): You really do see writing as a kind of sacrament then, don’t you? 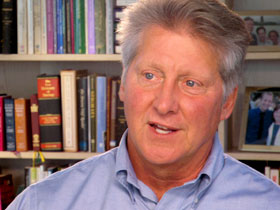 HANSEN: Yes, it’s a witness to what God is doing in the world. We’re supposed to worship and praise, and I can’t think of a better way of worshiping and praising than to write poetry or fiction.

Scott: (from television film “Missing Pieces”): “Why? Why did you have to come?”

Atticus: “Because you are my son.”

FAW: “Missing Pieces,” for example, is the made-for-TV movie of Hansen’s novel Atticus, the story of both mystery and the parable of the prodigal son.

HANSEN: I started with the idea of my grandfather and really of God walking on earth. I thought of Atticus as a God figure, because the prodigal son story is of a God figure and human being figure.

FAW: Hansen’s Assassination of Jesse James explores the relationship between the legendary outlaw played in the film adaptation by Brad Pitt.

Jesse James: (from the film “Assassination of Jesse James”) “Open that safe.” 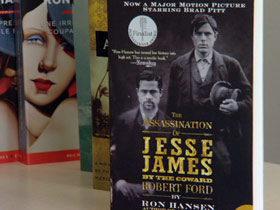 FAW: And Bob Ford, an outlaw who once worshiped James.

HANSEN: It’s about hero worship and how you kill the things you love. I think Buddha once said you must kill all your teachers, and that’s what I think was going on with Bob Ford and Jesse James.

FAW: And Hansen draws on the biblical story of Cain and Abel when Bob Ford shoots Jesse James in the back. Ford, who expected to be praised for that, was instead reviled.

HANSEN: How do you become for a short time a hero and then become one of the most loathsome personalities in the world?

FAW: Like Cain, a “fugitive and a vagabond on the earth.”

HANSEN: Right, yes. But I wanted to have a sense of how do you, once you’ve done that, how do you redeem yourself? 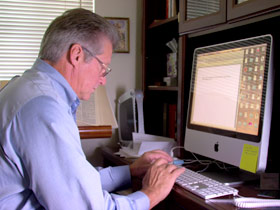 FAW: Ron Hansen grew up in Omaha, Nebraska, along with his twin brother and three sisters in a Catholic household. He graduated from Creighton University and the Iowa Writers Workshop, where he studied with John Irving and John Cheever.

FAW: Hansen does extensive research for each novel. One of his best known, Mariette in Ecstasy, was based in part on two saints who lived in Europe in the 1800s. Mariette in Ecstasy is the story of a beautiful nun who bears the wounds of Christ, the stigmata, and who is banished from her order.

HANSEN: I developed this idea of the stigmata as a kind of metaphor for a passionate love affair with Christ, and that was the stumbling block for the other nuns. And I wanted to have at the heart of it a kind of questionableness, so you could read it all the way through and say, “She’s making this up,” or you could say, “She’s the real thing.” I didn’t want to come down one way or the other. My own impression was that she was the real thing. 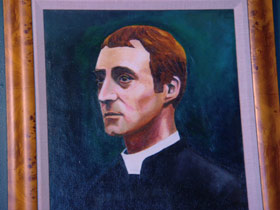 FAW: But perhaps the clearest sense of Hansen’s own faith is in his novel Exiles. with its gripping portrait of the priest Gerard Manley Hopkins, who found God and was still tormented.

HANSEN: I loved his poetry, I loved his language, and I loved the fact that he was miserable. At the same time he discovered that he could bring in his poetry and make it a reflection of his spirituality.

FAW: Hansen, a talented painter, didn’t just paint a portrait of Hopkins and study his poetry.

(to Hansen): You said at some point that you have actually prayed to him…

FAW: …and have been answered.

FAW: And you invoke their name at the outset of the prayer?

HANSEN: No. I just imagine them sitting there opposite me, talking just as I am to you and try to express what’s going wrong or what I need an answer to, and sometimes they give me the answers. 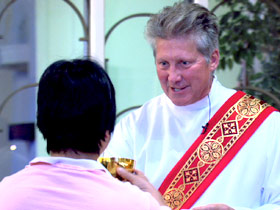 FAW: Hansen, once the deacon at Santa Clara Mission on the campus of the Jesuit college Santa Clara University, has been teaching English and creative writing there for the last 16 years. He is no fan of so-called “Christian fiction,” which Hansen says “is often in fact pallid allegory, a form of sermonizing.” That’s not for him.

FAW: He says faith-inspired fiction and religion can go hand in hand because each faces what he calls “the imponderables of life.”

(to Hansen): You say fiction and religion often share the same goals?

FAW: In what way? 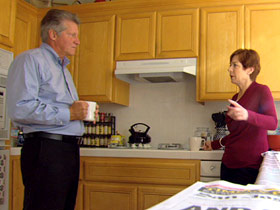 HANSEN: Essentially fiction shows you how to live a moral life or how to avoid an immoral life, and religion is trying to do that same thing, but fiction provides you models rather than lessons.

(to his wife): I’ve got that Juno Diaz book to read on the plane…

FAW: Now 63, Hansen is happily married to writer Bo Caldwell, whose novel City of Tranquil Light was inspired by her missionary grandparents.

If you think Ron Hansen’s role as a Roman Catholic deacon and as author of racy, sometimes salacious material might conflict, well, think again.

HANSEN: Fiction has to do that story, has to do the story of people making terrible mistakes and seeing how it could have been different or how they came out of it in a positive way. And that’s what the role of religion is, to do exactly the same thing.

FAW: From Jesse James then, to a beautiful nun, from Atticus to Gerard Manley Hopkins, Hansen says he has come to believe that religion need not be sack cloth and ashes.

HANSEN: That’s definitely not what God is looking for. God is looking for a connection, one on oneness with people. That feeling of God watching over you and loving you and embracing you and having that connection–that’s very rewarding, and that’s what gives people steel so they can stand all the terrible things that might happen in a person’s life.

FAW: Reflections of a Catholic deacon who entertains as he evangelizes, uniting the worlds of fiction and faith.

For Religion & Ethics NewsWeekly, this is Bob Faw in Cupertino, California.