PRESIDENT BARACK OBAMA: We draw strength from our victories, and we learn from our mistakes, but we keep our eyes fixed on that distant horizon, knowing that Providence is with us, and that we are surely blessed to be citizens of the greatest nation on Earth.

LAWTON: He also made a reference to his personal faith.

OBAMA: While I’m proud of what we’ve achieved together, I’m far more mindful of my own failings, knowing exactly what Lincoln meant when he said, “I have been driven to my knees many times by the overwhelming conviction that I had no place else to go.”

LAWTON: For years, Democrats have battled the public perception that their party is not friendly toward religion, and that battle was evident again this week. Controversy erupted after the initially-approved Democratic platform had removed any explicit mention of God. Then, in a last minute floor action, delegates re-inserted a reference to “God-given potential” from the 2008 platform. Rev. Derrick Harkins is director of Faith Outreach for the Democratic National Committee. He said the Democratic platform always contained a strong—and specific—appreciation of faith. 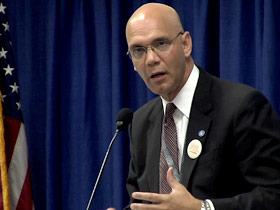 REV. DERRICK HARKINS (Democratic National Committee): People of faith make up a significant and important and valuable part of who we are as Democrats and that’s across the spectrum of faith traditions. We are committed to the values and ideals that people of faith hold and we have a president who has expressed that consistently and persistently and so we just want to make sure that that message gets out. That’s our task.

LAWTON: According to Harkins, this week had the largest amount of official faith-related events ever at a Democratic convention. As is tradition at both conventions, each floor session was opened and closed with prayers by a diverse array of religious leaders. In addition, the DNC organized daily prayer gatherings. And twice during the week, the Faith Council held panel discussions where delegates and guests from the religious community reflected on faith and national issues.

Also this year, the Democrats invited a prominent nun, Sister Simone Campbell from the lobby group NETWORK, to address the delegates on the floor. She gave a rousing faith-based critique of proposed Republican budget cuts and their potential impact on the poor. 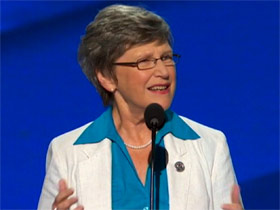 SISTER. SIMONE CAMPBELL (Executive Director of NETWORK): Together, we understand that an immoral budget that hurts already struggling families does not reflect our nation’s values. We are better than that.

LAWTON: Harkins acknowledged the faith-based attention was strategic for Democrats.

HARKINS: Faith communities are such an inherent place of mobilization and engagement.

LAWTON: In the last election, 54 percent of all Catholics voted for President Obama. He also did very well among Jewish voters, black Protestants, and those who say they are not affiliated with any particular religion. John McCain did slightly better among Protestants over all. The vast majority of evangelicals voted Republican.

Democratic officials said they are taking no constituency for granted in this campaign. But there are challenges in many parts of their faith coalition. Catholics will be key in this election, especially given their large numbers in several battleground states. For many Catholics, the Democratic Party’s strong support for abortion rights remains a stumbling block. A group called Democrats for Life has been pushing the Party to include their perspective. At the same time, they have been working to convince Catholics that it’s okay to vote Democratic. 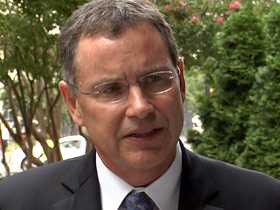 STEPHEN SCHNECK (Catholics for Obama): When I look at the policies outside of the abortion arena, when I look at things like Medicaid and the Affordable Care Act and community health centers and public housing programs, these are all programs that are proven to have a good impact in lowering the abortion rates in the United States.

LAWTON: Stephen Schneck is co-chair of Catholics for Obama. He asserts that the proposed Republican budget cuts will lead to more abortions.

SCHNECK: Thinking about that, I have to say I’m morally challenged to think about supporting Romney-Ryan as a pro-life voter.

LAWTON: On the Jewish front, there was outrage after the Democratic platform eliminated a previous provision asserting that Jerusalem “is and will remain” the capital of Israel. That provision was later re-inserted along with the mention of God. Republican Jewish activists have been arguing that President Obama is vulnerable among Jewish voters because of his policies on Israel. But leaders here said it is wrong to stereotype Jewish views. Jeremy Ben-Ami is president of the Jewish lobby group J Street.

JEREMY BEN-AMI (J Street): There’s a wide range of views among Jewish Americans when it comes to Israel. It turns out the majority of Jewish Americans are actually quite moderate in their views and not as hawkish and militant as the loudest voices that are heard.

LAWTON: He’s confident Jews will vote for Obama in high numbers in November. 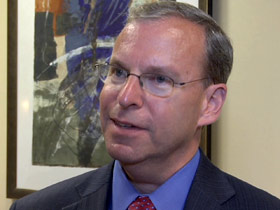 BEN-AMI: That vote is not up for grabs in any significant way and it is certainly not when it comes to Israel.

LAWTON: Among some Black Protestants, there was concern earlier this year after President Obama changed his position to now support same-sex marriage.

WILLIAM OWENS, JR. (We Celebrate Marriage): It is a major significant issue for the black church. The black community holds to a core sense of values and one of those values is family and to support gay marriage is to do away with family.

LAWTON: But delegates here who also oppose gay marriage say it hasn’t eroded support for Obama in their community.

MARKGETTA LANGFORD (Georgia Delegate): If you’re going to take one issue, and just throw out everything he’s trying to work for because of one issue? I can’t do that.

LAWTON: Meanwhile, Democrats have been working to make inroads in other religious communities that are traditionally Republican, such as evangelicals. A group of local churches held a prayer rally before the convention focusing on what they called the spiritual and moral decline in America. Democratic activists are trying to make the case that the economy is also a moral issue. 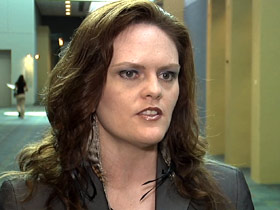 CHRISTINA FORRESTER (Christian Democrats of America): A lot of our values as Christians are about taking care of the least of these, it’s concerning the poor, immigration, caring for people with mercy so we’re looking at things like, in the context of mercy, compassion and that’s what the Bible really talks about and that’s what Jesus tells us to do.

SEN. HARRY REID (US Senate Majority Leader): I’m a Democrat because I am a Mormon.

LAWTON: And, while most members of the Church of Jesus Christ of Latter-day Saints are Republican, a new group called LDS Democrats argues that the Democratic Party is actually a better fit with their values.

TAYLOR HARTLEY (LDS Democrats): As I think about how we are to put upon charity above all other virtues, I then think to myself, Ok, which political party most closely follows the virtues of charity and compassion and clearly, it’s the Democratic Party.

LAWTON: Taylor Hartley’s wife, Jamie, a delegate from Utah, has a rare illness. For them, affordable healthcare is the most pressing issue. I asked if they weren’t even a little tempted to vote for fellow Mormon Mitt Romney. 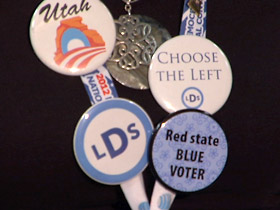 JAMIE HARTLEY (LDS Democrats): It’s tempting because I would love to see a Mormon president. But, when it comes down to the values that are most important to me, I have to stick to those.

LAWTON: Amid all the faith-based outreach, there were some cautions. Rev. C. Welton Gaddy, president of the Interfaith Alliance, said while religion should have a vigorous role in public life, there are some fine lines that shouldn’t be crossed.

REV. C. WELTON GADDY (Interfaith Alliance): I’m going against both parties when I say this: I don’t feel really good about religious outreach that says we want to take the role of the church and use that as a role for enlisting people to support our party. Religion’s role in this nation has always been most important when congregations acted like religious bodies, not political bodies.

LAWTON: Religion, he believes, should contribute to something larger than politics.

GADDY: Bringing together our nation is more important than who wins an election. On the day after the election, we’ve got to be a nation that has learned enough from this past several years, that whoever wins, we can come together and say, we’re going to make this nation what it ought to be.