LUCKY SEVERSON, correspondent: This is the Mormon Temple in Salt Lake City, epicenter of the Church of Jesus Christ of Latter-day Saints. There’s been a lot of criticism about Mormonism, especially among evangelicals like Stephen Davis. He’s a religion scholar at Claremont McKenna College.

PROFESSOR STEPHEN DAVIS (Philosophy and Religious Studies, Claremont McKenna College): If the question is, is Mormonism a legitimate expression of Christianity, honestly I would have to say no. I think that legitimate expressions of Christianity can be found in Roman Catholicism, Eastern Orthodoxy, and Protestantism, virtually all the Protestant denominations, but not Mormonism, because too many of their doctrines and beliefs are non-Christian.

SEVERSON: Patrick Mason is the chairman of Mormon studies at Claremont Graduate University and a Mormon himself. 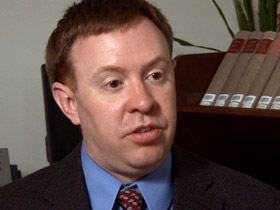 MASON: If Christian defines what is your relationship to Jesus—do you believe that salvation comes through Jesus, do you worship Jesus Christ—then no doubt Mormons are Christian. I mean they’ll be the first to tell you, look at the name of the church; it’s the Church of Jesus Christ of Latter-day Saints.

SEVERSON: Mason says antagonism toward Mormons stretches back to the beginning of the church. They’ve been called a cult, demonic, a false religion with a false prophet.

MASON: Mormons in a lot of ways are scarred from a long history of misrepresentation in what they see as false reports about the church or unfair treatment of the church, and this goes all the way back to the 1830s.

SEVERSON: That was when Joseph Smith said he had a revelation where Jesus told him that all the religions at that time were an abomination in his sight. From then on Mormons, who were seen by some as lower-class, superstitious dupes, were targets of ridicule and violence eventually leading to the assassination of Joseph Smith. In the 1860s, the government sent the army to Utah to keep an eye on the Mormons. The army established this fort overlooking Salt Lake City. The cannons that were here were aimed at the Mormons.

But the most vocal critics of Mormons have long been evangelicals. Richard Mouw, president and professor of Christian philosophy at the Fuller School of Theology, says one reason is because Mormons have been such good proselytizers. 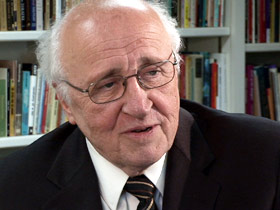 PROFESSOR RICHARD MOUW (Fuller Theological Seminary): Mormonism began as this evangelistic program of going out and getting converts, and very often converts from the traditional denominations, and so evangelicals and Mormons have had an unusually hostile relationship over the years because they have been sort of competing proselytizing programs, but also they traded the rhetoric in very hostile terms.

MASON: There’s a sense of them-against-us that in some ways gets inflated among the grassroots membership of the church. But there is no doubt that for many people they see evangelicals as the enemy, and they need to be converted.

SEVERSON: Among scholars, the important distinction between Mormonism and most mainstream Christian churches centers on theology.

MASON: The Mormon view of the Godhead is that God, Jesus Christ, and the Holy Spirit are three separate beings, so Mormons reject a Trinitarian notion that they’re three in one. Mormons see them as three distinct and separate beings.

DAVIS: Evangelical Christians, like all mainstream Christians, want to say that Father, Son, and Holy Spirit are one in some really strong, ontological sense. 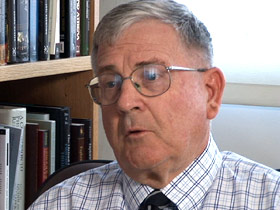 MASON: And Mormons also have an idea that they’re not—that God is not ontologically different than humans in the sense so God and humans are essentially the same species, that humans can progress to eventually become like God. God is not radically “other,” but in a sense approachable and understandable and knowable.

DAVIS: The idea that God, the God whom we worship, was once a human being and then grew to be God, grew to Godhood, will strike most evangelical Christians as being blasphemous.

SEVERSON: Another fundamental difference is that Mormons rely on more than just the Bible for the word of God.

MASON: Certainly Mormons don’t believe in the Bible as the only word of God. They believe in an open canon, that God continues to speak to prophets today.

DAVIS: They believe in continuing revelation. They have three other books, the Book of Mormon, the Pearl of Great Price and a book called Doctrines and Covenants, and evangelical Christians would never accept that those books are inspired or the word of God or are prophetic. 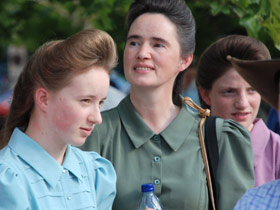 SEVERSON: Mormon theology has changed over the years after church prophets have received new revelations. It wasn’t until the 1970s that the church allowed blacks to hold the priesthood. And the church’s policy allowing plural marriage was abandoned in the 1890s after a prophetic revelation.

DAVIS: A lot of Americans are suspicious of Mormons over the issue of polygamy, which should have gone away a long time ago. But the problem is that there are these Mormon fundamentalist sects, especially in southern Utah and northern Arizona, that still practice polygamy, and I think that gets a lot of the American people confused about what the Mormon Church’s position really is.

SEVERSON: As for lingering animosity today, Professor Mouw says some of it is because the Mormon Church has grown so big and prosperous.

MOUW: And I think it has something to do with the growth of Mormonism. While on the one hand they’re entering into the mainstream in a lot of ways, they’re also a very powerful presence globally—14 million Mormons around the world. They’re identified with some of the major businesses. There’s a sense that it’s a kind of juggernaut, that it has tremendous clout. 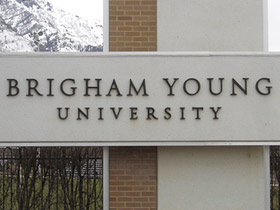 SEVERSON: As for the claims that Mormonism is a cult, Professor Mouw takes exception.

MOUW: I mean one reason why I don’t think it’s very helpful to call Mormonism a cult is that they have a world-class university. They have scholars who consider all kinds of complex topics. You know, Scientology doesn’t have a world-class university. Hari Krishna doesn’t, Jehovah Witnesses don’t. But Mormonism has pretty much entered into the mainstream of intellectual life.

SEVERSON: Mouw goes even further, accusing some some of Mormonism’s accusers of “shading the truth.”

MOUW: I want to say I think the motives of people who often attack, for example, attack Mormons as evangelical leaders or other kinds of Christian leaders is that they do want to protect their people against falsehood, against being led astray. But when it comes in terms of standing up for the truth, if you tell falsehoods about another religion that’s bearing false witness against our neighbors.

SEVERSON: Mouw expressed those sentiments to a packed house at the Mormon Tabernacle. His words did not sit well with many evangelicals.

MOUW: The press the next morning the big story was “Fuller Seminary president says we’ve sinned against Mormons,” and boy, I get hate mail yet on that.

DAVIS: I think we have not been fair. There’s a lot of anti-Mormon apologetics that are out there and anti-Mormon polemics, where unfair charges are made against the Mormons. I think that’s absolutely right.

SEVERSON: The bias against Mormonism has been a problem for Mitt Romney’s campaign. But attitudes seem to be changing. A recent poll by the Pew Research Center found that eight of ten voters who know Mitt Romney is a Mormon say they are either comfortable with his faith or that it no longer matters.