RABBI JOSHUA MAROOF (Magen David Sephardic Congregation in Rockville, Maryland): Selichot literally means prayers for forgiveness and this tradition is a very ancient one it goes back at least a thousand years if not more.

When Sephardic Jews recite selichot, even though the content is serious and one can say it’s even somber, there is a joy to the way that we recite selichot. There’s an excitement, there’s an energy a happiness to it because this reconnecting with God in advance of the High Holidays places us in a spiritual state that is so much more conducive to really being able to enjoy and get the most out of Rosh Hashanah and Yom Kippur out of the High Holidays are just around the corner. 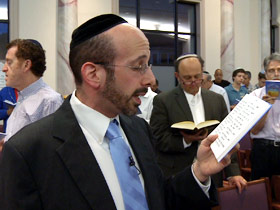 The term “Sephardic” is originally derived from the word sepharad which means Spain. In our own congregation we have Jews from the whole gamut of what would now be called Sephardic Jewry including many, many Jews from Morocco, in particular; Iraqi Jews, Iranian, Syrian, Indian Jews, Jews from North Africa who may or may not be of Spanish decent.

Our melodies are a blend of predominantly Moroccan melodies because we have such a large and vibrant Moroccan Jewish community, but also what is called Yerushalmi. Yerushalmi is a style of music which is really based on the Arabic styles of music and is primarily the style of prayer of the Syrian Jews.

The shofar on Rosh Hashanah is suppose to signify our crying out to God, a crying that can’t be articulated in words, something that’s coming from the heart.

We have our Torah in a hard case. It’s the Middle Eastern Jews who had this practice of putting their Torah into a hard case. On the New Year on Rosh Hashanah, we are reading about Abraham being faced with the challenge the test of having to hypothetically sacrifice his son, Isaac, and in the context of the high Holidays what it makes us think about obviously is willingness to dedicate ourselves to a higher purpose.

When the Jews commit the sin of worshipping the golden calf in the Book of Exodus we are told that Moses goes unto the mountain, back up to Mount Sinai for 40 days to pray for forgiveness, and according to tradition God finally forgave the Jews on Yom Kippur, on the day of Atonement that so 40 day period that Moses was praying on the mountain is the 40 day period we pray selichot, our own supplications for forgiveness.

One of the things we ask God for is for the time to be able to correct to be able to rectify errors that we made, and be able to rise above them with the full recognition that nobody knows what day is going to be their last.

It can be overwhelming when people think about the ultimate judgment before God and the sense of destiny, the sense of mortality that we are preoccupied with, but when one considers that God is willing to take all of that off your shoulders as long as you’re doing what you can to take a few steps in the right direction it’s a very positive and inspiring and comforting message I believe.