LUCKY SEVERSON, correspondent: This was the Family Leadership Summit in August on the outskirts of Des Moines, Iowa. For Christian conservatives from throughout the state and from as far away as Alaska, this was the place to be. The hot subject of this day was judicial restraint. Listen to former Republican presidential candidate Rick Santorum.

RICK SANTORUM: We need to make it very, very clear what our values are, and that they are not to have elitist judges rule from on high and tell us that we have to fundamentally change who we are as Americans, and that’s what this is about.

SEVERSON: What this was about in particular is that Iowa’s seven supreme court justices ruled in 2009 that a state law prohibiting same sex marriage violated the Iowa constitution. In 2010, three of the seven who were up for retention were voted off the bench. It was decisive and it was orchestrated in large part by a nonprofit organization called the Family Leader, founded by Bob Vander Plaats. 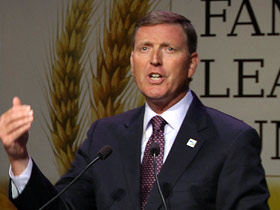 BOB VANDER PLAATS (The Family Leader): When you have a supreme court that is willing to legislate from the bench saying Iowa will now be a same sex marriage state and when you allow them to amend the constitution basically saying we’re going to grant rights that our founders could have never imagined, that is a dangerous path to go on.

SEVERSON: This is former justice Michael Streit, one of those removed from the bench after serving 27 years, nine years on the state’s highest court.

JUSTICE MICHAEL STREIT (Iowa Supreme Court, 2001-2010): We did what we had to do, not what we wanted to do. And that’s the essence of good judging. Good judging, a fair and impartial court are courts that are allowed to rule as they must, not how they want to rule, and that’s what we did here.

PROFESSOR RACHEL CAUFIELD (American Judicature Society): Judges have one job and one job only. They take an oath to uphold the constitution.

SEVERSON: Rachel Caufield is a professor of political science at Drake University and a research fellow at the American Judicature Society. She thinks it’s the Family Leader and other conservative groups around the country, that are inserting money and politics into the judicial system. 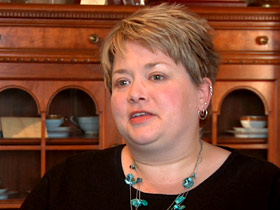 CAUFIELD: I think we have a movement afoot to politicize our courts and in politicizing our courts I think basically that undermines the quality of justice in America. There’s definitely a trend nationwide. We’ve seen a huge increase in campaign spending among judicial candidates, many of whom are supported by similar interest groups.

SEVERSON: According to the nonpartisan group called Justice at Stake, from 2000 to 2009, money spent on state supreme court justice races jumped more than two-and-a-half times to over $206 million. In Iowa in 2010, money spent, mostly from out of state totaled over $1.2 million to un-elect the three justices there with ads like this:

TELEVISION ADVERTISEMENT (National Organization for Marriage): “If they can redefine marriage none of the freedoms we hold dear are safe from judicial activism. To hold activist judges accountable, flip your ballot over and vote no on Retention of Supreme Court Justices.” 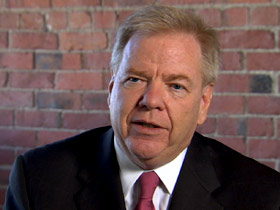 JUSTICE STREIT: They were attacking judges that had devoted their lives to being fair and impartial, to not let theology, ideology, campaign considerations, political considerations sway their opinions one way or the other.

(to Crawford): Does it worry you that the person who has the most money is more than likely going to win?

VICKI CRAWFORD: Actually my thought is the truth will win if it’s given enough of an opportunity to be out there.

VANDER PLAATS: A lot of people make a big deal about, okay, money came from a lot of different places. Only the people of Iowa were allowed to vote on this issue. And Iowans are very intelligent, they’re very savvy. They voted those three justices off, and I think there were 76 judges on that ballot that year, only those three judges lost their job. Everybody else kept their job. 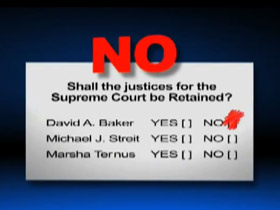 SEVERSON: Vander Plaats says he does not want to see the courts politicized, doesn’t want to see judges campaigning door-to-door. It was, he says, the Iowa Supreme Court ‘extremist’ justices who inserted politics into the system.

CAUFIELD: If you really value a fair and impartial judiciary then you have to ask yourself, you know, what about these people who are, who are politicizing the judicial branch and who are going after judges knowing that it’s difficult for judges to respond, knowing that when a judge responds that automatically throws their integrity into question.

SEVERSON: The gay marriage decision was unanimous. All 7 justices, some democrat, some republican, voted to invalidate Iowa’s ban. In Iowa, the governor appoints the justices who then have staggered terms. Three lost their jobs in 2010. Another is up this year and then the other three will be up for retention in upcoming years. The Family Leader’s founder wants them all punished.

VANDER PLAATS: I’m going to go back to being a high school principal. Sometimes when we’d have under aged drinking going on and we’d show up at a beer party and say only three kids remain there. Well, those three got the discipline to them, but if we knew there was four others, we called on the four others to fess up and accept the same kind of punishment that the other three did. 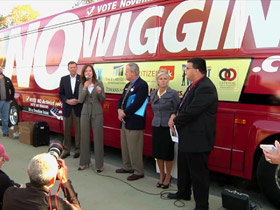 SEVERSON: This year, Justice David Wiggins is up for retention, and he has already been targeted by the Family Leader.

SANTORUM: Judges are not there to impose their will on the rest of us. Will you decide on this election day to vote out Justice Wiggins and send another strong message here in the state of Iowa? (applause)

CAUFIELD: We do have the right to kick them out if they’re not abiding by the constitution.The idea that judges predetermine what their decisions would be on hot button issues, before they reach the bench, what that effectively does is it says that the entire judicial process is a sham.

SEVERSON: But that is a view not held by some at the Family Leadership Summit.

PASTOR LAURENCE WHITE (Our Savior Lutheran Church, Houston, Texas): The people have the right to know what the beliefs and convictions of a candidate for any position, whether that be a justice or a judge or a senator or representative. Simply to say I’m going to uphold the law is no longer adequate, as we have taking place within our culture a collision of two fundamentally different views of the meaning of the constitution and the nature of American political life.

CAUFIELD: All across the country, every citizen deserves to know that if they’re going to walk into a courtroom, they’re going to have a fair trial and a decision’s going to be rendered by a judge who’s not tarnished by any sort of political agenda, and when we start inserting politics into the judiciary we threaten that ideal.

SEVERSON: There are several other states where spending on judicial races appears to be setting records. And now, a new study by the Center for American Progress shows that judges in races that have seen the most campaign spending between 2000 and 2010 have ruled in favor of big business 71 percent of the time.

JUSTICE STREIT: The study confirms that those judges that have to raise money to get elected and to get reelected, they know who’s buttering the bread. They know that they are going to have to please somebody. These corporations that give money to judges are not doing it out of civic interests for good courts. They’re trying to get people that will rule in their favor in the long run.