FRED DE SAM LAZARO, correspondent: Minnesota is the 32nd state where voters have been asked to weigh in on same sex marriage. In every case, they’ve voted to ban it. Eighteen states outlawed civil unions as well. Minnesota’s question is narrow: Should the state constitution define marriage as the union of one man and one woman? A “yes” vote would prohibit laws to legalize gay marriage, though it wouldn’t preclude civil unions.

DALE CARPENTER (University of Minnesota Law School): The fact that the amendment is just focused on the marital status itself is a reflection of a new reality, which is that much of the public accepts that same sex relationships are legitimate and that they have legal needs but may not be ready to accept the title of marriage quite yet. I don’t think that’s a form of bigotry, I think that’s a form of risk-averseness. 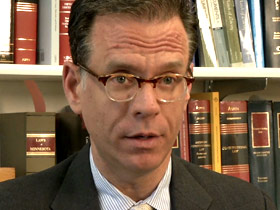 DE SAM LAZARO: Law professor Dale Carpenter has studied the issue of gay marriage. He’s with the No Campaign, which includes civic and gay rights groups and a growing number of churches sympathetic to what they say is equity for gay couples. But Carpenter admits many people are reluctant to redefine an age-old social institution.

CARPENTER: I think for a lot of people there’s a strong religious conviction that God made marriage and marriage is for one man and one woman…

Cathedral service: This year as we come for the Rosary parade, we are thinking about the beauty of the sacrament of marriage..

DE SAM LAZARO: For supporters of the amendment, that conviction is at its core.

ARCHBISHOP JOHN NIENSTEDT (St Paul-Minneapolis): Marriage matters to every Minnesotan, whether or not we personally choose to marry. Intuitively we know it is the natural way we bring together men and women to conceive and raise the next generation… 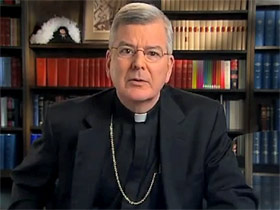 NIENSTEDT: What will happen to children growing up in a world where the law teaches them that Moms and Dads are interchangeable, and that marriage has nothing intrinsically to do with the bearing and raising of children? We know from experience that in other states, children as young as first-graders are taught by the government that gay marriage and traditional marriage are both the same…

DE SAM LAZARO: Several churches and faith-based groups have joined in the Yes Campaign. A Minnesota law passed in 1997 already prohibits same sex marriage. But proponents say absent constitutional protection, that could change at the whim of a judge or legislature, with daunting consequences for institutions and people of faith who oppose gay marriage. 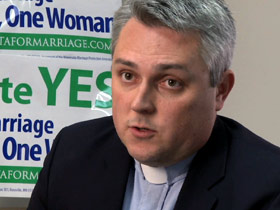 JEFF EVANS (Evangelical Pastor): Catholic Charities, for instance, in Boston, they were mandated after same sex marriage was legalized there by the legislature, it was mandated that they place children in their adoption agency within same sex couples and of course that violated the conscience of Roman Catholics there and they/were forced to close their doors

DE SAM LAZARO: It’s such concerns that have drawn volunteers to the Minnesotans for Marriage phone banks. Tommy Burns, a father of six, is a recent transplant to Minnesota from Massachusetts

TOMMY BURNS (Volunteer): When I think back to again, to what happened in Massachusetts and New York, when politicians can push that through on the people, it’s disheartening. So again I am just very pleased that this state is allowing us to vote on it. 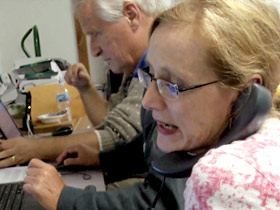 LISA RUMBAUGH (Volunteer): I got involved because I want to see the Bible being preserved, so many of the moral things, the moral fiber of society is being erased and I believe that it’s a sin to practice homosexuality; there’s many places in the Bible that say that.

MATT BIRK (NFL): I can put up with a lot from government, like higher taxes. And while I don’t like it, pushing God out of public schools. But letting a small number of government and business elites and judges define what marriage is to Minnesotans doesn’t seem very fair.

DE SAM LAZARO: Amendment opponents have their own take on government interference. 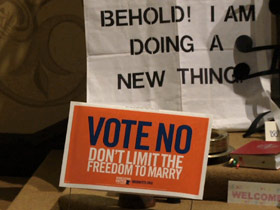 DE SAM LAZARO: Some big employers, like cereal maker General Mills have publicly opposed the amendment, arguing it would hurt recruitment. Others have stayed neutral but say they support their gay employees and customers. Retailer Target notes that its marriage registry welcomes gay couples. However, unlike many other state campaigns, some of the most prominent No voices have also come from pulpits and preachers.

CARPENTER: Many campaigns have run away from religion, in the past, trying to say there’s a separation of religion and state. Whereas in Minnesota I think we have embraced the idea that a person of faith can and should oppose the amendment.

DE SAM LAZARO: The No campaign’s faith director, Grant Stevensen, is a pastor at this St. Paul Lutheran congregation.

REV. GRANT STEVENSEN: We’re acting on our faith but we’re also acting on behalf of children that come from families that don’t fit in one small box of what a family looks like. It’s terrible for children to hear that one type of family is a normal family, is a good family and then another family, maybe your family, with two moms or two dads is not a normal family. I think that’s really difficult and devastating for children. 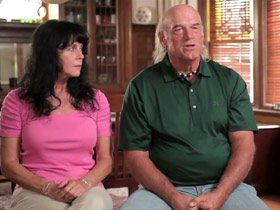 TV Spot: Used to be this wasn’t even an issue. Marriage was one man and one woman. But times change and I’ve thought about it more…

DE SAM LAZARO: Campaign commercials for both sides have been largely free of anger or vitriol. This ad for the “no” side emphasizes fairness.

TV Spot: My marriage is the most important thing in my life. Who am I to deny that to anybody, gay or straight? I’m not going to limit the basic freedom just because I’m uncomfortable.

DE SAM LAZARO: It is a deeply religious issue, and the religious coalitions, like the political ones, transcend the traditional divide.

PASTOR EVANS: There are Roman Catholics, Baptists, Pentecostals, minority ethnic churches, Presbyterians like myself, non-denominational folks, all coming together, rallying together behind marriage, and it’s brought people together on the yes side. 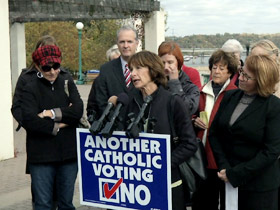 But at a cost. Sharp divisions have played out publicly in the Catholic Church. Priests were asked not to publicly oppose the amendment but some have been defiant. This video posted on the internet is of Fr. Bob Pierson, a Benedictine monastic and therefore not under diocesan jurisdiction. He says the church has no business in this issue.

REV. BOB PIERSON (St. John’s Abbey): Until now, the Church hasn’t concerned itself with civil marriage. The church doesn’t recognize civil marriage of its members. If a Catholic is married in a civil ceremony, they are said to be married outside of the Church and the marriage is not recognized.

DE SAM LAZARO: Whatever the ballot outcome, the rift is likely to linger.

PIERSON: Is it getting uncomfortable to go to church these days? (nods, yes)

DE SAM LAZARO: A group of prominent Catholics called this news conference to express their opposition.

NANCY SCANLAN: When I first heard about the amount of money that was taken out of the archdiocese funds to pay for this amendment and know how schools closing and teachers not getting paid well and things that I think that should be addressed in a social justice way, I was so angry I sat right down and wrote a letter. And the letter that I got back said to me, “I’m sorry you don’t see things our way. We may end up being a smaller—stronger church.”

DE SAM LAZARO: The church has come under fire for heavy spending. However, opponents of the amendment have outspent its supporters by four to one. Still, recent polls show a tight race, well within the margin of error.

For Religion & Ethics NewsWeekly, this is Fred de Sam Lazaro, at home, in St. Paul.