BOB ABERNETHY: Welcome, I’m Bob Abernethy. It’s good to have you with us as we begin today a new three-part series we call “None of the Above.” It’s about the fast-rising number of people in this country who say they have no affiliation with any particular religion. According to a new survey released this week by the Pew Research Center’s Forum on Religion & Public Life in partnership with this program, that number is now the highest it’s ever been in any previous Pew polling.

When pollsters ask whether people are Baptist or Catholic or Jewish or some other religious tradition, more and more people say, in effect, “None of the Above.” So they have come to be called the Nones.

We wanted to know who these Nones are, why they are unaffiliated, and what that says about the future of American religious life. Greg Smith is a senior researcher at Pew’s Forum on Religion and Public Life. 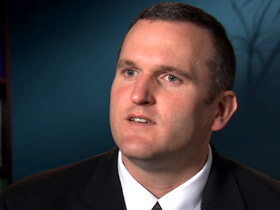 GREG SMITH (Pew Forum on Religion & Public Life): Today in 2012 almost one in five American adults, 20 percent, describe themselves as religiously unaffiliated. That equates to about 46 million adults in the United States, so this is a big, growing, important group in American society. To see its continued growth at this kind of rapid rate has been very striking.

ABERNETHY: Striking indeed. In the early 1990s just under 10 percent were unaffiliated. Since then that number has doubled. About 13 million are atheists and agnostics. Thirty-three million more describe their religion as “nothing in particular.” By education and income and other common measurements, the Nones are very much like Americans as a whole. Except for age.

SMITH: About one-third of all American adults under the age of 30 describe themselves as either atheists or agnostics or say they just don’t have any particular religion. And that large number is a big part of what’s driving the overall growth in this population.

ABERNETHY: Being unaffiliated means not being a member. It does not mean being a nonbeliever or being hostile to religion. Indeed, many Nones have kind words for places of worship.

ABERNETHY: Two-thirds of the unaffiliated say they believe in God, or a universal spirit. More than a third, 37 percent, call themselves spiritual but not religious. About one in five say they pray every day, and the same number say religion is at least somewhat important in their lives. With all that religiosity, then, why do 46 million Americans say they are unaffiliated with any religious organization?

SMITH: They tend to be much more likely than the public as a whole, for example, to say that religion and religious organizations are too focused on rules, too concerned with things like money and power, too focused on politics.

ABERNETHY: We spoke with several young Nones, among them Rachel Mariman, a junior in college who was raised in a very religious home. But during her senior year in high school, she says, she turned away from all religion. 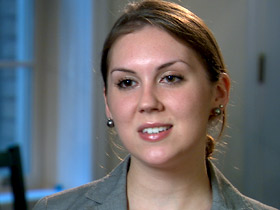 RACHEL MARIMAN: My church was actually pretty good, but I sort of just had issues with religion in general. Young people are becoming increasingly willing to tolerate people who are different. To tolerate different sexual orientation, different religion, different ethnic background, whatever. We don’t want to be told that we can’t accept gay marriage or that we can’t support birth control or abortion. You can still be moral and you can still be a good person without being religious.

ABERNETHY: Twenty-seven-year-old Kellen McClure describes himself as very spiritual. He believes in God and visits churches, but not for their worship services.

ABERNETHY: Instead, Kellen meditates, here in a basilica.

(praying): Thank you very much for everything that we have. 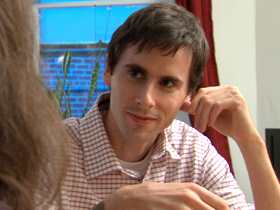 MCCLURE: Every day my girlfriend and I sit down to dinner. I am insistent that we say a grace, and that grace is not necessarily a religious grace. It’s just a moment that we can both sit there and reflect on how lucky we are.

ABERNETHY: Kellen also said one reason he does not go to church often is that Sunday mornings are his only times to rest.

MCCLURE: We live very hectic lives. I work. I go to school. It leaves a very short amount of time to do things on my own free time.

ABERNETHY: Among religious leaders and social scientists, there are lots of theories about why there are so many Nones. Some say many people don’t want to join anything, religious or otherwise. Some think there’s a general softening in religious belief and commitment. Many of the Nones say they want no part of the conservative politics some churches embrace. Others say society in general has become much more tolerant of non-believers, so it’s easier than it used to be for some people to acknowledge publicly what they have long been in private, to come out of the atheist or agnostic closet.

But we spoke with a nonbeliever, Lauren Anderson Youngblood, who thinks discrimination against atheists has by no means stopped.

LAUREN ANDERSON YOUNGBLOOD: My mother taught us not to tell people that we didn’t have a belief in God because she feared persecution, and many atheists today are fearful of coming out because of that discrimination, and because of the fact that they very well may lose friends or family members, they may be shunned.

ABERNETHY: Many people of faith may be troubled by the findings in our survey. For instance, three-quarters of all the Nones say they were raised in religious homes. Very few of them say they are seeking a church that is right for them; they seem quite content to remain unaffiliated. Indeed, for people in any age group, the percentage of unaffiliated when they are young remains the same as they get old.

MCCLURE: I think that if I have children I think that’s the same thing that I would like to teach them is that religion is important, being spiritual is important. What’s not as important is to join and to go every week.

ABERNETHY: However people interpret our survey, Greg Smith insists the results are snapshots, not predictors.

ABERNETHY: And if 20 percent of all adults say they are religiously unaffiliated, that means 80 percent are still connected.

Tags: None of the Above, Pew Forum, religiously unaffiliated