FRED DE SAM LAZARO, correspondent: Angeles City is one of the Asia’s most notorious sex districts. Even on a rainy evening, dozens of young women were outside their establishments on the look out for customers.

DE SAM LAZARO: Shay Cullen cuts a promising customer profile around here, and on this night he was frequently accosted. In fact, the 74-year-old Ireland-born Dominican Catholic priest has campaigned for four decades to clean up this district.

The boom in commercial sex here dates back to the Vietnam War, when the U.S. military greatly expanded its Philippine bases nearby. Today, Father Shay, as he’s called around here, says 12,000 women work this strip.

(speaking to Fr. Cullen): Where do they come from primarily?

CULLEN: The majority in this area are coming from North America, Australia is quite big, Koreans, there’s special clubs here for the Koreans, but also from Europe, we have Germans, Swedes. 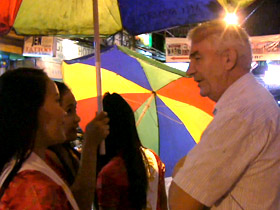 CULLEN: Many of the girls are underage and young and available. On these clubs and bars, this is only the outer, the more legitimate looking trafficking of human beings, no, but the trafficking of minors, younger girls is secret, and it operates on a different system. It’s all done by cell phone, without any direct contact between the supplier, the trafficker, and the customer. They have go-betweens.

DE SAM LAZARO: Their stories have common threads: physical or sexual abuse in childhood and families in various forms of dysfunction and separation. In all cases, abject poverty underlies their child labor and prostitution.

UNIDENTIFIED WOMAN 2: I left our house because I had a misunderstanding with my grandmother. My parents are not here. My father is in Saudi Arabia and I don’t know where my mother is.

UNIDENTIFIED WOMAN 3: I was inside the room of Alex and he had instructed me to remove my clothes. So we were naked when the NBI arrived in the house. 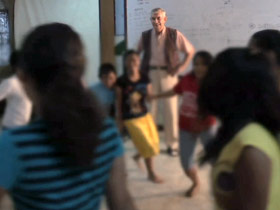 DE SAM LAZARO: Many of the young women and girls brought here were rescued by NBI, the National Bureau of Investigation, usually responding to reports and pressure from PREDA and other advocacy groups that look out for potential trafficking victims.

UNIDENTIFIED WOMAN 2: I didn’t want to leave because I needed the help of the pimp. I could not survive without it.

DE SAM LAZARO: Father Cullen says the goal of counseling here is to allow these children to be children. Many have come from jails where they were sentenced for petty crimes. Many are reconciled, if not comfortable, with a life of prostitution before they come to PREDA.

CULLEN: So the first thing, the service, is the sense of welcome, acceptance, relief and protection. You’re safe at last. No one can touch you again. They meet friends who suffered the same, so it’s not only me, and the essence of our program, of course, is giving affirmation. They’ve been told they’re nothing, they’re worthless, they’re only good for prostitution.

MARLENE RICHTER: This is the hotline…

DE SAM LAZARO: The PREDA Foundation runs a hotline to rescue women and girls from prostitution. They can call in or, as many now prefer, send a text message. 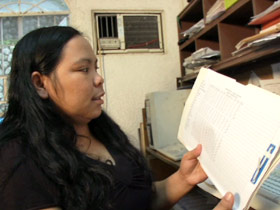 DE SAM LAZARO: The hotline is never far from Marlene Richter, one of 19 counselors and facilitators who work here. She coordinates rescues with law enforcement, a job the 31-year-old may be singularly well-qualified for. When she was 13, Richter and an even younger child prostitute were rescued.

RICHTER: I have two abusers, one from Germany, one from Netherlands. That’s the time that our abuser fly back to Germany and Father Shay helped us in pursuing our legal case in Germany.

CULLEN: I alerted our contacts, ECPAT in Germany, which is a campaign to end child prostitution and pornography. And in a week or so we’re on a plane, Marlene gets up and gave her testimony and everything and that’s it. Then he was—within a week he’s convicted and sentenced.

DE SAM LAZARO: It was a rare triumph. Most cases proceed far more slowly and must be pursued in a Philippine legal system riddled with corruption.

GERONIMO SY (Prosecutor, Department of Justice): Who polices the policemen? Who prosecutes the prosecutor? Who judges the judge? Who polices a corrupt media, you know, when everybody’s in cahoots, especially these are well entrenched interests? So that’s a major challenge. 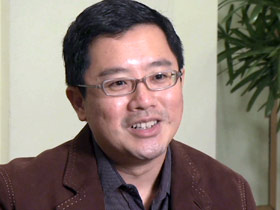 DE SAM LAZARO: The two-year-old administration of President Benigno Aquino has tried to crack down. Trafficking is now a non-bailable offense, for example. But Fr. Cullen fears that could actually increase corruption.

CULLEN: If you make the penalty so huge that the bribe has to be so huge and they pay it because of the penalty would be in prison.

DE SAM LAZARO: That’s so ironic, that the harder you penalize somebody the higher the stakes are for people to make money on the deal.

CULLEN: Exactly, and therefore the temptation of the judges and the prosecutors is just, you know, fantastic.

DE SAM LAZARO: The U.S. State Department, which monitors trafficking worldwide, has the Philippines on a watch list. But it does praise a stepped-up government commitment, noting there were a record 27 convictions in 2011. But Father Cullen says the influential church leaders in this predominantly Catholic nation have not been sufficiently committed. 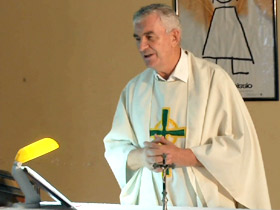 DE SAM LAZARO: Father Shay Cullen, ordained in 1969, describes himself as a product of the historic Second Vatican Council that exhorted Catholics to be outspoken on poverty and social justice issues. He arrived in the Philippines in 1972.

CULLEN: You couldn’t miss it coming here and seeing it on the streets and all around, so it made a strong, no, challenge, no to me, personally to, you know, get out of the rectory and into the streets more or less.

DE SAM LAZARO: He actively campaigned to close the U.S. naval base in Subic Bay, arguing that it wasn’t in the Philippines’ best interest. The base was closed in 1992. And he sued the U.S. government to help the support of thousands of children born to Filipina women and U.S. servicemen fathers, with whom they have no relationship. But to make a dent in the entrenched sex industry, he wants to attack the underlying poverty. As long as it persists, he says, people will be vulnerable to traffickers. His foundation has various enterprises, selling these soap stones to a boutique chain in America, for example, and local crafts and dried mangoes grown by local farmers.

CULLEN: We really want to go into all these villages, give seminars, training and then buy their products and give them fair trade prices, really good money, so they can use that money to send their kids to school.

DE SAM LAZARO: The PREDA Foundation sends the children under its care to school, training and, in cases like Marlene Richter, college. She’s now happily married—ironically—to a German tourist and has a baby boy, living happily ever after, she says.

For Religion & Ethics NewsWeekly, this is Fred de Sam Lazaro in Olangapo City in the Philippines.