LUCKY SEVERSON, correspondent: Among traveling evangelists Nick Vujicic is a rock star. He’s packed them in in churches around the globe. This is his second visit to the Northland megachurch in Orlando—a preacher with no arms and no legs who wants no sympathy.

NICK VUJICIC: Why does a man without arms and legs have a smile like this? It surpasses the understanding of the world, because I should be depressed. I was, until Christ came in.

SEVERSON: He travels with another message: that churches need to be more inclusive of people with disabilities.

VUJICIC: To me, in my mind everyone has a disability. Everyone needs God. But definitely it is said again and again and again, we need to go out and reach out to those people who are in need.

SEVERSON: It’s not surprising that Nick Vujicic would be invited to Northland. This is a church with about 15,000 members that goes out of its way to welcome and accommodate people in need, including the disabled. One program the church offers is a class for physically and mentally disabled children. 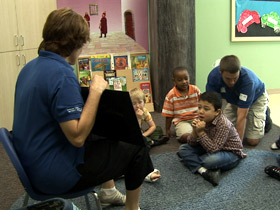 Teacher to class: We’re going to read the Bible story that we just heard.

LAURA LEE WRIGHT: They could go into regular class, but they might not really get the message of Jesus and the message of hope, because our volunteers are trained to accommodate their special need and their conditions.

Teacher to class: Can you all show me how you pray?

SEVERSON: Unfortunately, Northland’s attitude toward the disabled may be the exception rather than the rule. Over the years, America’s millions of physically, mentally, and emotionally disabled have made great strides in the workplace, but places of worship have lagged behind.

Jim Hukill was diagnosed with muscular dystrophy when he was only two. He has made it his life’s mission to open more churches to the disabled.

JIM HUKILL: We are still very much in an infantile state with the faith and disability movement. I think that we have seen over the last decade a significant advancement, but we are nowhere near what has to happen. 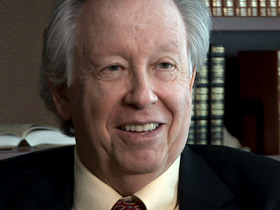 SEVERSON: Places of worship and the disabled is the subject of a new book called Amazing Gifts by author Mark Pinsky. He says one stumbling block for people, whatever their faith, is that at first they feel awkward around people with disabilities.

MARK PINSKY: They say, “I don’t know what to say. I don’t know what to do. Should I tell my kids not to stare?” All these things are okay, and people in the disability community recognize that there’s going to be some unease, some initial discomfort. That’s okay. That shouldn’t discourage you from plunging ahead.

SEVERSON: He says it’s not that churches, synagogues, and mosques deliberately ignore people with disabilities.

PINSKY: We have a sort of “Zen of the normal” in most of America. Most of us worship with people who are like us racially, economically, and physically, and so if we don’t see people with disabilities we just don’t think about them. It’s not that we actively excluded them, because I don’t think we did. It’s just the fact that they weren’t there. If they weren’t seen, they weren’t considered, and because they weren’t there, people thought they didn’t exist. 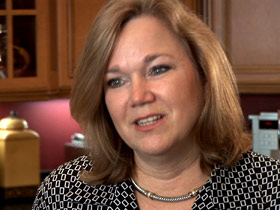 SEVERSON: One of the 64 stories in Pinsky’s book is about Linda Starnes. She and her husband have two children, both with disabilities. Her daughter, Emily, has Asperger Syndrome, a form of autism. Her younger son, Mac, was born without a lower jaw and has lived his life connected to breathing and feeding tubes. When he was a baby the doctors recommended that the parents sign a “do not resuscitate” order.

LINDA STARNES: And so we said you know we need to talk about this. We’re not going to place that order right now. We need to pray about this, and we need to talk to our pastor, and decided that we would allow the course that God had for Mac to take place, and so we said we will not make that decision. You do everything you can for our son, and so they said this means a life on a ventilator, and we said that’s okay. We’re going to be up for that challenge.

SEVERSON: Her daughter, Emily, is now a freshman at the University of Tennessee. Mac plays the xylophone in the school band and has dreams of becoming a motivational speaker and/or a preacher.

Stanley Hauerwas, a professor of theological ethics at Duke Divinity School who has lived and worked with the disabled, says the stories in Pinsky’s book help them and those who care for them overcome feelings of isolation. 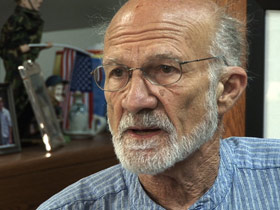 PROFESSOR STANLEY HAUERWAS: One of the aspects of disability is the kind of loneliness that it creates that you’re not sure is shareable with other people. One of the things Mark’s book does is help you share stories in a way that you recognize you’re not alone.

HUKILL: I think for people with disabilities their hunger and their desire is for someone to look past the hardware and to be able to embrace them as individuals—for someone just to share cheeseburger together with them.

PINSKY: And most of these things don’t cost money. That’s the thing that was kind of a surprise for me. It’s not just about ramps. It’s not just about elevators. It’s about attitudes and programs. It can just be asking people with Down Syndrome in your congregation if they’d like to be greeters. It says this congregation values people with disabilities and the contributions they can make. They are not just people who need help, but they are people who can help.

SEVERSON: Professor Hauerwas says caring for the disabled is fundamental to the message of Christianity.

HAUERWAS: People that you could think might have been disabled in terms of how they were depicted in the gospel, but they are seen as mad or possessed by demons and so on, and Jesus cured them. He drove the demons out. 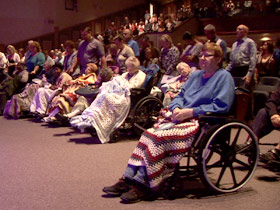 PINSKY: There’s this wave coming demographically of people with disabilities who will be looking for spiritual homes. We’ll find people returning from the wars with PTSD, with limbs missing, and finally there’s the aging cohort of which I am a part, which is the boomers who are in large numbers aging into infirmity more or less, and the churches that are ready for that wave demographically are going to be the ones who help fill pews.

SEVERSON: Over the years, Linda Starnes has become a major force behind the welcoming nature of Northland Church. She says the bigger payoff for inclusive congregations can’t be measured in numbers.

STARNES: I think you become actually a congregation that’s more blessed, in all honesty, because you grow a heart towards being responsive to people you feel like may have needs and that you are there to perhaps serve. In the end, I believe many people realize not only am I serving, but I am receiving.

SEVERSON: And her son Mac, who can’t speak, has become a church favorite. Here he is on YouTube with Northland pastor Joel Hunter.

PINSKY: If kids see this, if kids see people with disabilities integrated and involved in the congregation, that sends a message that’s imprinted on their brains, and that’s something that’s incredible in terms of its value to the congregation.

SEVERSON: Pinsky says making a congregation inclusive for people with disabilities is more a matter of what’s in your heart than what’s in your budget.