KIM LAWTON, correspondent: It’s been a century of celebration. For the past one hundred years, St. Olaf College, a small Lutheran school in Minnesota, has put on a Christmas concert that has become known—and loved—around the world. In a variety of ways, nearly a third of St. Olaf’s 3,000 students participate in the Christmas Festival, which combines more than 600 voices from five campus choirs, including the elite St. Olaf Choir. The repertoire showcases a variety of sacred music. There are classic holiday standards, songs that hark back to the school’s Scandinavian heritage, and some from other cultures as well. The program is designed to reflect the essential religious meaning of Christmas. Anton Armstrong conducts the St. Olaf Choir.

Listen to the St. Olaf performance of "Hark the Herald Angels Sing"[audio src="https://www.pbs.org/wnet/religionandethics/files/2013/12/Hark-the-Herald-Angels-Sing-Listen-Now-MP3.mp3"]

Listen to the St. Olaf performance of "Beautiful Savior"[audio src="https://www.pbs.org/wnet/religionandethics/files/2012/11/Beautiful-Savior-Listen-Now-MP3.mp3"]

LAWTON: The popularity of the Christmas Festival has gone global. For decades, it has been broadcast on public radio and public television, and the Armed Forces Radio and TV Service as well. This centennial concert was also simulcast in movie-theaters across the country.

ARMSTRONG: It has been a model for spreading this message of faith at a time that people tend to forget why the season even exists.

LAWTON: It all began 100 years ago, when F. Melius Christiansen, a Lutheran immigrant from Norway, established the St. Olaf music department and student choir. 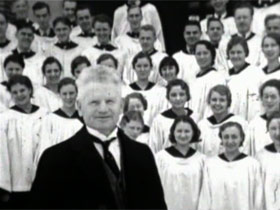 ARMSTRONG: What he found was that church music had fallen to a very lamentable state, that the popular music of the day seemed to be eradicating all the traditional music and that so many of the young immigrant Norwegian students who he was teaching at St. Olaf were forgetting the heritage of great hymns. So he established the choir in many ways to revitalize choral singing in the church, congregational singing in the church.

LAWTON: Christiansen insisted on artistic excellence, and the reputation of the St. Olaf choir continued to grow. The choir went on tour and performed in some of the top venues in the nation. According to many scholars, Christiansen’s work had a profound influence on America’s a capella choral tradition.

ARMSTRONG: He really set a model for choral sound, he changed the whole concept of choral and really taking a program of sacred, unaccompanied choral music and doing it at such a level that it would be accepted in the finest concert halls.

LAWTON: While the college now has several choirs, the St. Olaf Choir remains the most elite. Armstrong is only its fourth conductor. He was hired in 1990 and actually sang in the choir himself as a student in the 1970s. He holds rigorous auditions. 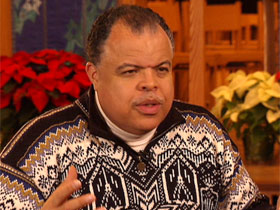 ARMSTRONG: I don’t want just a beautiful voice. Because sometimes as good as these kids are, I can get divas. I don’t have time for divas and this is not about me. The work we do in all of our groups, especially that choir, has to be about us, and service.

LAWTON: On top of their academic school load, choir members practice an hour and a half a day, five days a week. Laura Kyle is a junior English major and has been in the choir for two years.

LAURA KYLE, Choir Member: I’m named after my great grandma who was in the choir and sang under F. Melius Christensen, and I was never able to meet her, but being in the choir has made me feel a connection on that level and that has made it extra special for me.

LAWTON: The students develop close relationships with one another.

BENJAMIN SIMMONS, Choir Member: It’s been one of the most powerful experiences of my life to sing in such an amazing ensemble, to make music at such an incredibly high level of artistry, but at the same time, to have that camaraderie with my fellow choir members who are really like family.

LAWTON: In a unique trait, St. Olaf Choir members always hold hands with each other during performances.

BRYAN WELLS, Choir Member: It really helps us connect with the people around us, on a personal, as well as a musical level. 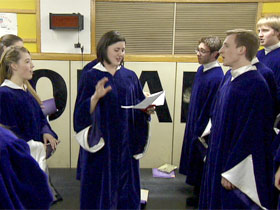 LAWTON: Armstrong believes what takes place in the performances goes beyond the music.

KATHRYN BABER, Choir Member: One of the most special things about the St. Olaf Choir is knowing that when you go out to perform, no matter where you are or what performance it may be, that there are people out there whose lives you can touch, and that also includes the people that you stand next to.

LAWTON: The choir strives to be true to its Lutheran heritage, but Armstrong says it’s not about pushing a particular brand of Christianity.

ARMSTRONG: We invite people into a conversation and for people to explore their thoughts, their feelings, without creating walls around them, but to look at, hopefully a God that is a God of love and God of hope. Religion, especially Christianity in this country, sometimes has been pulled in such a direction of condemnation we’ve lost I think the gospel of grace.

LAWTON: Armstrong says the connection between music and spirituality has been powerful in his own life.

ARMSTRONG: I’m a regular churchgoer, but I have to honestly say, sometimes my closest experiences to God have been either singing in the ST. Olaf Choir or conducting that choir. 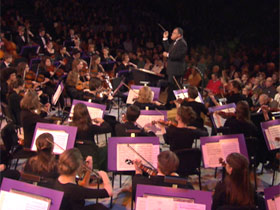 LAWTON: He recalls visiting his mother shortly before she died. She was unresponsive, until he started playing and singing hymns.

ARMSTRONG: Her favorite gospel hymn would be his eye is on the sparrow and I started to sing:  And I sing because I‘m happy. I sing because I’m free. His eye is on the sparrow. And I know He watches me. She sang with me. And when that was done, she looks up at me and she goes, “Baby! When’d you get here?" When science and medicine couldn’t bring my mother back to me, these hymns, these songs of faith that she shared with me, were the things that we shared together.

LAWTON: According to Armstrong, the choir sings to bring glory to God. And perhaps nowhere is that more evident than in their signature song, Beautiful Savior, an arrangement done by Christiansen.

ARMSTRONG: That I think has been a song that can epitomize and has been a model for us throughout the years, why do we do this? We sing praise to God. Glory and honor, praise, adoration, now and forevermore be thine. That is the focus of our work.

LAWTON: When everything falls into place, Armstrong says it’s a spiritual experience.

ARMSTRONG: Some people go to prayer and do that, but you know, still small voices and burning bushes don’t seem to work with me. You know? But in the minute when that chord locks and we’ve been struggling with it and it finally works, it’s as if, yea, God is there.

LAWTON: It’s an experience he hopes gets transmitted to the audience as well.

ARMSTRONG: When people, when they leave, they have been transformed. They don’t know why, but perhaps at 90 minutes of experiencing the utmost in beautiful music, in powerful and profound text, will somehow seep into the bodies of those performing and certainly those who are hearing.

The elite St. Olaf Choir is considered a pioneer in America’s a capella choral tradition, and for more than 100 years St. Olaf College, a small Lutheran college in Northfield, Minnesota, has held a Christmas musical festival that is known and loved around the world.