SUSAN BRAUNSTEIN (The Jewish Museum, New York): The rabbis associated a miracle with the holiday that when the ancient soldiers came to rededicate the Temple in Jerusalem and they lit the menorah that was in the Temple, they only had one cruse of oil to burn for one day, but miraculously it burned for eight, and so that's why we call it the festival of lights and why we light the Hanukkah lamp. The rabbis going back to Maimonides and earlier felt that the lights of the Hanukkah lamp were sacred.

The rabbis actually did specify a list of materials that were preferable to use for the Hanukkah lamps. Gold and silver, of course, being the best, if you could possibly afford that. Most people couldn't. If you were poor and couldn't afford a permanent Hanukkah lamp, you could use an egg shell, or a nut shell, or a potato carved out. 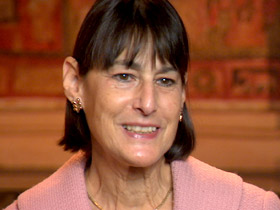 The lamps used in homes for most of the centuries that Hanukkah has been celebrated were actually using oil. And then over time in the 19th century and into the 20th century, candles became more popular for home use. It's pretty messy to use oil; we've tried it.

The rabbis in ancient times didn't say much about the shape of the lamp or its decoration, and over time the decoration on the back plates or the shaft and the arms of the lamps became amazingly elaborate, inventive, and fun because there were no restrictions. And so many of them actually reflect the places where Jews were living, so in our collection, for example, we have a lamp that was made in Australia, and it has kangaroos and emus on it. We have one made in the United States with the Statue of Liberty on it. Some of the lamps are actually in the shapes of houses or synagogues. 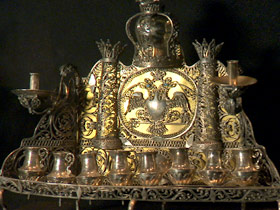 Wherever Jews went they always paid homage to the ruler where they lived, knowing that their fate was often in the hands of the ruler. A very common symbol that we find on lamps that used to be from Poland are the double-headed eagle of the Austrian Empire.

The lamps from Islamic lands generally don't represent human figures in objects for religious use, and so many lamps are in architectural form. They have the pointed arches or the horseshoe shaped arches that are so common in Islamic-land architecture.

Lamps from the Indian Jewish community actually come from three different communities located in different parts of India. We have one that is in the shape of a Jewish star, and I think that has to do with Zionistic aspirations of the community. We have in the collection a charming lamp made just about the time when Israel gained independence in 1948 of an Israeli soldier holding a banner with the Israeli flag, and across the top of the banner are the places where you would put the lights.

One of my favorite lamps is a lamp that's in the shape of the Tree of Knowledge that stood in the Garden of Eden, written about in the Bible, and crawling up it's trunk is a snake, the one that tempted Eve to eat the apple. I just love the idea that one would equate the Hanukkah lamp with a tree and with one that was in the biblical story, and the whole thing is very folkishly rendered, and so it just has a special place in my heart. I really just enjoy lighting my lamp and just seeing those candles glowing and thinking about all my fellow Jews all over the world who are lighting the lamp along with me.

The Jewish festival of lights has dispelled the winter darkness for ages. “The rabbis going back to Maimonides and earlier felt that the lights of the
Hanukkah lamp were sacred,” says Susan Braunstein, curator of Judaica at the Jewish Museum in New York. But if you couldn’t afford a gold or silver lamp “you could use an egg shell, or a nut shell, or a potato carved out.”