BOB ABERNETHY, host: We have a profile today of one of the most prominent leaders of the evangelical Christian right. He is Richard Land, president of the Southern Baptist Convention’s Ethics and Religious Liberty Commission. Land plans to retire next October after 25 years as a leader of the culture wars.

Many observers have seen in recent polls and in last month’s election returns evidence of a decline in the influence of evangelical conservatives, a setback for the causes Land has led. But he concedes no such thing.

RICHARD LAND (President, Ethics and Religious Liberty Commission): I think it’s not a fair reading. For instance, on the pro-life issue a majority of Americans now say that they are pro-life.

ABERNETHY: I thought that legal abortion in almost all cases is favored.

LAND: The question about whether it should be legal in most cases is a different question, and the percentage who would make it illegal in most cases is actually going up. And when you begin to peel the onion, you discover that the reason that a majority now say that it is pro-life is that for the last 39 years pro-life people have been having their babies, and pro-choice people have not been having their babies with near as much frequency, and so there’s a huge shift. The younger you are, the more likely you are to be pro-life. 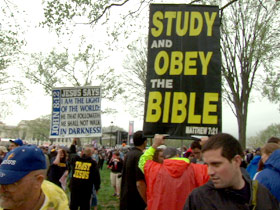 ABERNETHY: But what about the votes in support of gay marriage, which Land opposes vigorously? Was that a setback for him?

LAND: These four state elections where the same-sex marriage folks won are four of the most liberal states in the country. They won with a high of 52 percent of the vote, having outspent their opposition 9-to-1. We still have won 33 elections, they’ve won four now, and I think the country is still deeply divided on the issue of same-sex marriage.

ABERNETHY: I asked Land whether he was concerned about poll data such as we’ve reported on this program that show almost 20 percent of the country say they have no religious affiliation at all.

ABERNETHY: Land has called the culture wars “a titanic struggle for the nation’s soul.” 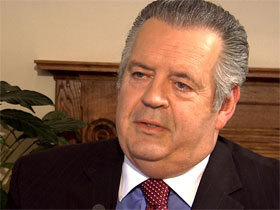 LAND: Oh, I don’t think either side is winning. I think both sides are winning in different places. We have a gigantic rift running through our culture, and it’s a rift that doesn’t run between denominations and between institutions. It runs through them. It makes less difference whether you are a Catholic or a Baptist than whether you believe in traditional values and traditional morality or whether you are a post-modernist. If you had the same America that you had in 1972, when 75 percent of Americans lived in homes where they were married, Romney would have won in a landslide. But we live in 2012 America, where only 48 percent of Americans are married and living in homes. When 53 percent of our babies that are now born to women under 30 are born out of wedlock, we’re in deep trouble.

ABERNETHY: For Land, the antidote to social problems is a return to religion.

LAND: Spiritual revival. I do not see us, the traditional values folks, winning this struggle without a spiritual revival that ripens into an awakening and culminates in a reformation. The single greatest advantage, Bob, that an American can have today, and it trumps all others, is to be born into a home with a mother and a father who stay married to each other. If you are born into such a home, it trumps religion, it trumps ethnicity, it trumps economic rank, it trumps IQ, it trumps everything, and yet over half of our children have lost that home by the time they are seven. As far as I am concerned, that is collective societal child abuse. 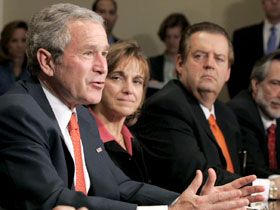 ABERNETHY: Land was very close to President George W. Bush, and he publicly endorsed Mitt Romney. He is scathing about President Obama, as he indicated when I asked him whether he thinks Republicans and Democrats can find a compromise to avoid going over the “fiscal cliff.”

ABERNETHY: You really think that the president of the United States wants to do damage to the country?

ABERNETHY: Before we finished, I wanted to ask Land about Christian evangelizing—trying to convert people of other faiths.

Do Christians have an obligation to try to evangelize Muslims?

ABERNETHY: What do you say to a Muslim or a Jew or anybody else who says, “Well, Christianity is okay for you, that’s fine, but for you to try to tell me I must convert is to disrespect my religion”?

LAND: Well, if the price of respecting your religion is to disrespect mine, the price is too high.

ABERNETHY: You would be comfortable telling Mitt Romney that you think that he’s not a Christian?

LAND: Sure. That would be my duty as a Christian.

ABERNETHY: Dr. Land says he is resigning his job next fall, not retiring. He says, of the social issues, I’ll probably continue to talk about them.”