In a Philadelphia suburb at Conwell-Egan Catholic High School, this too is part of the effort to keep Catholic schools open. Here students devise real solutions for real-world problems.

The new approaches are needed. For the last decade, 26 percent of Catholic schools have closed. Because of the recession, funding is down, the cost of running the schools is up, and enrollments have plummeted.

DR. JOHN CONVEY (Professor of Education, Catholic University): There has been a drop in enrollment, and over the last 30 or 40 years it’s over two million fewer students. From my point of view, it’s a crisis.

FAW: The situation is so dire, says the bishop in charge of the archdiocesan schools in Philadelphia, something entirely different—call it an educational “Hail, Mary”—was needed. 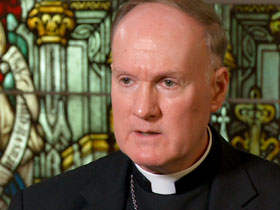 BISHOP MICHAEL FITZGERALD (Archdiocese of Philadelphia): We’re in this because our educational system was imploding. Enrollment-wise, finance-wise, something radical—radical surgery had to be done. We cannot do it the same old way.

FAW: So the archdiocese has now given management of 21 of its schools, including Conwell-Egan and schools in the inner city, to a private foundation called Faith in the Future. It will help sell the schools to potential students and raise millions of dollars by appealing to alumni and wealthy donors, led by former chief of Cigna insurance Ed Hanway, who says the foundation can do what the archdiocese could not.

EDWARD HANWAY (Chairman, Faith in the Future Foundation): The resources of the archdiocese are extremely limited. We can bring resources to bear on certain issues that the archdiocese may not have been able to, For example, admissions management, outreach into the community, and building a formal, structured marketing plan for our schools. 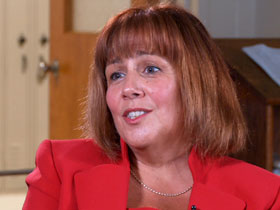 FAW: The education at the schools run by the foundation will remain decidedly Catholic. This theology class for freshmen is still taught by a Franciscan brother. And, as always, students are required to go to mass throughout the year. In just one year here, because of the foundation’s new business model, this school, slated for closing not that long ago, has seen enrollment increase.

JANET DOLLARD (President, Conwell-Egan Catholic High School): We have more freedom, in a sense, in that initiatives that we have are now supported by the Faith in the Future Foundation. So it’s a matter of greater resources, greater leveraging of funds to acquire the resources that we need to be successful.

FAW: Other Catholic schools in large cities often can’t survive because of diminishing funds and rising costs. Gone are the days when nuns, who for a small stipend, did most of the teaching at Catholic schools. Many have been replaced with lay teachers. 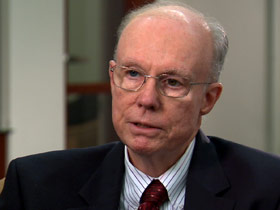 CONVEY: Now when you have to pay a living wage to a lay teacher, that started that acceleration of the cost, and when that started to happen, the tuitions didn’t go up fast enough.

FAW: And subsidy funding to these schools from the parishes and archdiocese has dried up because of the recession and changing demographics. If a neighborhood gets poorer, there often isn’t enough money to keep the schools open.

CONVEY: It is an anguishing situation, because the church wants to serve the poor. The church has what it calls a preferential option for the poor, and when the church gets into a difficult situation in terms of financially they’re not able to provide for the poor, that’s very anguishing.

FAW: The Catholic mission of serving the poor is one of the values that the Faith in the Future Foundation is working to maintain. Ed Hanway says the foundation will delegate a portion of its money for scholarships and is supporting many Catholic schools in the inner city. 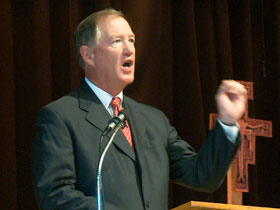 HANWAY: That’s a terrific opportunity for us to direct funds into those underserved communities where the poorest of the poor exist, and where our schools provide a terrific value for them.

FAW: The neighborhood of this New York City Catholic school was once poor.

FAW: But as the area gentrified and principal Katherine Peck was brought in to run St. Stephen, it went from nearly closing to thriving. Inside, there are enrichment programs galore, like this French class…and violin recitals and classes.

KAREN CARBONE: We looked at a lot of schools and this school was right up there with the independent schools, especially in terms of the extras and things that it was offering. 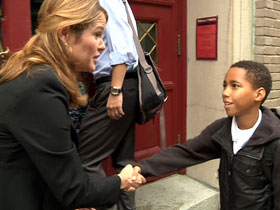 FAW: To attract more affluent parents, Katherine Peck offered what expensive independent schools offer, only at a much lower price. To do this she started an aggressive campaign to raise money and got the neighborhood involved.

KATHERINE PECK (Principal, St. Stephen Catholic School). Everything that we’ve done here has been based on the community and student interest, parent interest, and other stakeholders in the school, whether it be parishioners or donors to the school, and so we’ve gone out in the last three years and said, “What is it that you believe you would want in a school for your own child, and how can we make that happen here?”

KAREN CARBONE: To see the demise of Catholic schools has been something that has pained me for years. And the fact that this is doing an about-face, and we’re a part of that, and our children are a part of the school turning around is really—it’s special in a lot of ways for us.

Teacher in classroom: One, seven, three. Next. 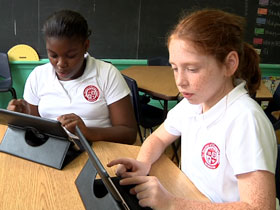 FAW: Tuition at St. Stephen averages $6500 a year. Parents are more than willing to pay.

MICHAEL CARBONE: It’s just such a special place. The teachers, the curriculum, I think what we’re looking for was a place that was nurturing, but also a rigorous, rigorous academic program.

L.E. HARTMAN-TING: The values here are, our children are—they’re kind, and being kind and talking about their spirituality are things that happen in the classroom. We have seen our kids evolve. They’re moral creatures, and it’s just so important to us.

FAW: While three-quarters of the students at St. Stephen and Conwell-Egan are Catholic, non-Catholics feel right at home.

LAMOTHE WAHAD (St. Stephen Student): They won’t judge you. Like let’s say I am Baptist. They won’t be, like, “Oh, you’re a Baptist.” They don’t care what religion you are. 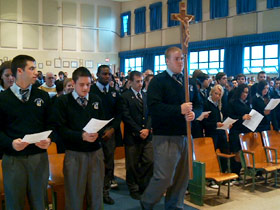 FAW (to Emily Conte): Do you feel awkward in any way not being a Catholic? You go to mass, for example.

EMILY CONTE (Conwell-Egan Student): No, it’s just like when they eat the body of Christ, you just cross your arms, and they still, like, everybody accepts you anyways.

FAW: Success at St. Stephen has come at a price: diversity. The percentage of black and Hispanic students is lower now than before. If some grumble that St. Stephen isn’t exactly serving the poor, Katherine Peck begs to differ.

PECK: I don’t think the mission of Catholic schools is just to educate the poor. I think it’s to educate all students and to be tolerant of everyone and to serve a parish and a neighborhood, and before, we weren’t really serving the parishioners, and we weren’t serving the neighborhood. We were barely serving anyone with 156 students, whereas now, today we’re serving 261 students, and we are a neighborhood-based community school.

FAW: The question now is whether the private foundation approach here in Pennsylvania, or that enriched curriculum approach in New York City, are isolated examples or models that can be replicated in financially troubled Catholic schools around the country. 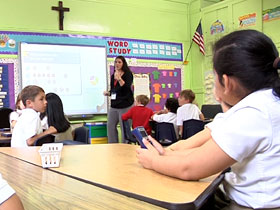 HANWAY: Can that be replicated? I think it can. But our key is let’s make it work here, and let’s learn how we can marry the notion of strong Catholic values, Catholic education, that Catholic identity with much more professional, business-oriented management of these schools.

FAW: At St. Stephen, Katherine Peck agrees there is no magic formula.

PECK: Every school has different needs, so the strategic plan that comes out of it is not a one-size-fits-all. For us, implementing enrichment programmings and changing the way we were teaching and our instruction was a great benefit to us. For another school, it might be having ESL programs and having parent workshops at night.

FAW: Whatever the approach, says Catholic University’s Convey, one ingredient is essential.

CONVEY: Leadership is absolutely critical in any kind of a private school to make sure that the school thrives. Sixty to seventy percent of those schools are at risk because they had a leadership problem at some point, and they’ve never recovered from it. So leadership is the absolute key.

FAW: Although enrollment at Conwell-Egan is growing, and St. Stephen no longer runs at a deficit, it is premature to call each experiment a complete success.

FAW: But these two schools, once perilously close to closing, do give reason for optimism. For now at least, the music has never seemed sweeter.