BOB ABERNETHY, host: The new 113th Congress, which was sworn in Thursday (January 3), includes several religious firsts. Democrat Tulsi Gabbard of Hawaii is the first Hindu member of Congress. Mazie Hirono, also of Hawaii, is the first Buddhist senator, although she describes herself as non-practicing, and Kyrsten Sinema, a Democratic representative from Arizona, is the first member of Congress to publicly describe her religion as “none.”

Joining me with more on the new Congress is our managing editor, Kim Lawton, Kim.

KIM LAWTON, managing editor: There was another religious first this week as well. The new Hindu member of Congress was actually sworn in with the Bhagavad Gita, which is a sacred text for Hindus. Now members of Congress generally use a Bible, the Hebrew Scriptures, some use the Constitution. Some don’t use anything they just do an affirmation as opposed to swearing in, but this was the first time we know of that the Bhagavad Gita was used. 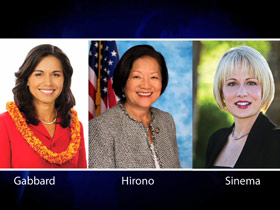 LAWTON: Well when Keith Ellison was elected and then sworn in in 2007 he did choose a Quran. Of course there are sensitivities with Muslims and so there was some controversy. He ended up using a Quran that was owned by Thomas Jefferson, which helped dampen some of that controversy.

ABERNETHY: Is this the most religiously diverse Congress there’s ever been? 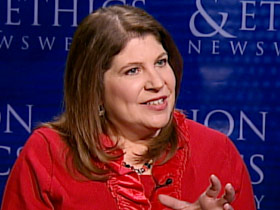 LAWTON: Exactly, but for the first time ever Protestants are less than half of the country, but they still make up most of Congress. Catholics went up this time around as well. So they make up about 30 percent of Congress.

ABERNETHY: What about people who say they have no religion?

LAWTON: They’re the most unrepresented group right now in terms of religion in Congress. About 20 percent of the country say they have no religious affiliation. We did have one atheist member of Congress a few years ago. Pete Stark was the first person to say I’m an atheist. Kyrsten Sinema is the first person to say I have none when you know asked what’s your religion, but that doesn’t represent the number of people of America.

ABERNETHY: And quickly, does it make a difference?

LAWTON: Well you know that’s hard to quantify. For some people it’s an identification, but for some people it does affect how they think about issues, how they govern. Think about last year when Congressman Paul Ryan was doing the budget he tied it to his Catholic faith. Other members of Congress do that. But for some that’s a personal thing and politics is something different.