Read an excerpt from “The Rebellious Life of Mrs. Rosa Parks” by Jeanne Theoharis

DAVID TERESHCHUK, correspondent: When Rosa Parks died just over seven years ago, prominent national figures celebrated her as the ordinary citizen who herself achieved fame by transforming the cause of Civil Rights through one simple act. A black woman in Montgomery, Alabama refusing to give up her seat on the bus to a white man.

But many of Mrs Parks’ admirers believe her true nature has not been fully recognized since her death. For one thing, too little account is taken, they think, of her strong involvement in the African Methodist Episcopal church. That involvement, says author of a new Parks biography, Jeanne Theoharis, was matched with a deep faith that called her to action.

Dr. JEANNE THEOHARIS (Author, The Rebellious Life of Rosa Parks): It is a faith that requires people to act in the world. And that December day she makes this incredible stand.

ROSA PARKS: (Interview from Pacifica Radio, 1956) The driver demanded the seats that we were occupying. The other passengers there reluctantly gave up their seats. But I refused to do so. 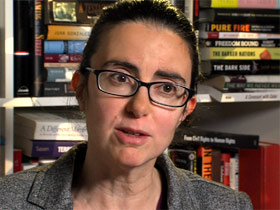 THEOHARIS: And there is no way to understand how she makes that stand, how she keeps going, without understanding at the core of her activism is her faith.

ROSA PARKS: (on radio) From the time of the arrest the word had gotten around over Montgomery. The ministers were very much interested in it, and we had our meetings in the churches.

THEOHARIS: She felt that the church had a responsibility to be active—and certainly she was proud of the way that it did so.

TERESHCHUK: Indeed Mrs. Parks was to become a deaconess in the AME church. She said that it was in her church that “I learned people should stand up for their rights, just as the Children of Israel stood up to the Pharaoh.” 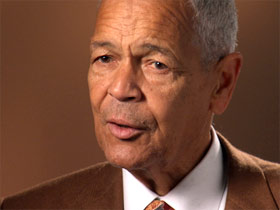 JULIAN BOND (Chairman Emeritus, NAACP): You know she is locked in American history as the “bus woman,” the woman who wouldn’t move on the bus. So that was, that was her contribution to the struggle for racial justice. In point of fact, she had a long life after that and before that where she did many things that were courageous and brave.

TERESHCHUK: While her protest on that day in 1955 may have been spontaneous, Mrs. Parks had been attending anti-segregation workshops at the famous Highlander Folk School, devoted to leadership-training for trade unionists and civil rights workers. And as time went on, Rosa Parks’ own political views could surprise people.

BOND: The radical Rosa Parks. Just putting that name “radical” with Rosa Parks shakes you because you’re thinking about this sweet little woman who wouldn’t move on the bus. She was to the left of the political spectrum. She was ahead of Dr. King on many issues.

THEOHARIS: Malcolm X is her personal hero, and her views on self-defense are much closer to Malcolm X’s than King’s. She is also active in the Black Freedom movement as it grows and changes. 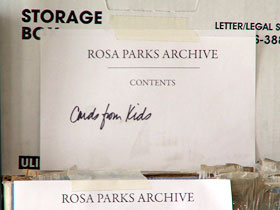 TERESHCHUK: We might have gotten used to seeing such unexpected aspects of Rosa Parks except for one curious fact: Parks’ own records of her life are simply not accessible to public view. That’s because of a dispute between family members and executors she appointed in her later years, and a probate court ordered that all her possessions should be sold, with the money that’s raised being split between the contending parties.

So the entire Rosa Parks Collection has passed into the care of a New York auction house, one that’s well-known for celebrity auctions.

TERESHCHUK: It’s all that correspondence, of course, plus her private writing over time in journals and notes that scholars would dearly love to examine closely.

ETTINGER: I just noticed something written when she was referring to her being age 10 where she is crying out about the injustices that she saw around her. 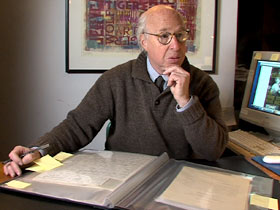 I could almost turn to any page and come up with something that’s certainly goosebump-raising for me, and I think for anyone. This one starts, “I would rather be lynched than live to be mistreated”.

TERESHCHUK: The problem is, this tantalizing collection has not sold and it’s remained unsold for five years. One reason is that more than just papers are involved.

For such a famous and much-loved historical figure as Rosa Parks, it’s poignant, to say the least, that all her possessions should end up in this workaday warehouse in Upper Manhattan.

Across about a thousand square feet, there are boxes and boxes of Rosa Parks’ memorabilia, ranging from documents and photographs, right through to really personal items like her jewelry and her dresses.

CAROLYN SALTER (Guernsey’s Auction Coordinator): This is a two-piece outfit that she wore when she got the Congressional medal. There’s the dress that she wore for her 85th birthday celebration.

TERESHCHUK: The court has mandated that the entire collection should be sold together as one piece—both papers and personal effects. And as such, in the auction world it could command an enormous asking price. 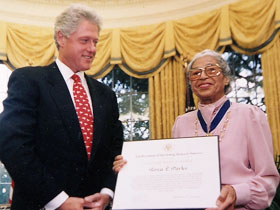 ETTINGER: We thought to put a price tag of $10 million on this archive.

TERESHCHUK: Historians are appalled that universities and institutes devoted to African American history, who seem a natural home for the collection, will not be able to afford such a large amount.

THEOHARIS: I mean, this puts it out of the reach of some of the institutions that Mrs. Parks cared tremendously about.

TERESHCHUK: The auctioneers are now suggesting they could perhaps put together a rich philanthropic donor with any organization that considers itself an appropriate custodian but feels it doesn’t have the money.

ETTINGER: I would certainly encourage anyone who felt that way to contact us to see if there wasn’t some creative way that we could assist them to make it happen. If they have the will and it’s the right kind of institution maybe we can make some suggestions that would produce the way.

TERESHCHUK: In the meantime, though, with no willing philanthropist coming forward, dedicated followers of Rosa Parks’ remarkable story will just have to wait to discover full chapter-and-verse of a life still untold in its entirety. And they are convinced that the current fate of her papers is doing a great disservice to their heroine.

THEOHARIS: It wouldn’t sit right with the Parks who was active in the world, who had this responsibility to be active and to be useful in the world—and that’s not about how much money you have or what you can afford.

BOND: I think she would be horrified. I think she’d be amazed to find out that money stands in the way of the public knowing more about her.

“THERE LIVED A GREAT PEOPLE” 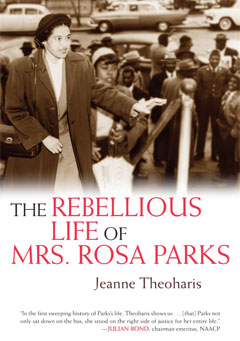 Dr. King took the pulpit and captivated the crowd. Exceedingly nervous, he had not had time to prepare a speech. But once he started speaking, he found his stride. He spoke of a time “when people get tired. We are here this evening to say to those who have mistreated us so long that we are tired—tired of being segregated and humiliated; tired of being kicked about by the brutal feet of oppression.” A tremendous thunder of assent rolled from the crowd. He then called on the dual traditions of Christianity and the Constitution to justify the struggle ahead. “If we are wrong, the Supreme Court of this nation is wrong. If we are wrong, the Constitution of the United States is wrong. If we are wrong, God Almighty is wrong…If we are wrong, justice is a lie.” And then Dr. King, with prophetic determination, concluded by extolling the importance of the movement being born in Montgomery for the annals of American history. “Right here in Montgomery, when the history books are written in the future, somebody will have to say, ‘There lived a great people—a black people—who injected new meaning and dignity into the veins of civilization.'”

Stunned, people were quiet for a moment and then rose to their feet, cheering and clapping. After he finished speaking, King hugged Mrs. Parks. Outside the crowd erupted in thunderous applause. That evening, the fifteen thousand people gathered there decided to continue the boycott indefinitely and formed a new organization called the Montgomery Improvement Association. The collection taken that night raised $785.

But Rosa Parks never got to speak.

From “The Rebellious Life of Mrs. Rosa Parks” by Jeanne Theoharis (Beacon Press, 2013)