JUDY VALENTE, correspondent: Grand Rapids, Michigan, is a city with deep roots in conservative Calvinist Christianity—a place where dancing and card playing were once banned, mowing the lawn on Sunday was frowned upon into the 1960s, and in more recent years, a professor who taught evolution at Calvin College encountered harsh criticism.

Though the Dutch Reformed Church and its more conservative offshoot, the Christian Reformed Church, is still a strong presence here, Grand Rapids today is also home to 82 Catholic parishes, five mosques, two synagogues, and Hindu, Buddhist, and Sikh temples. Interfaith dialogue would have been considered unacceptable by many here in the past. But in the last year, with support from the mayor and a wide range of community leaders, Grand Rapids has held 250 events aimed at deepening interfaith understanding. The effort resulted in some strange sights like this one: a Muslim imam preaching on Christian scripture at the Sunday morning service to a United Church of Christ congregation.

DR. DOUGLAS KINDSCHI (Grand Valley State University): If we can make this kind of thing happen in Grand Rapids, then I think that can be a model for it happening in other communities and really a model for the nation. 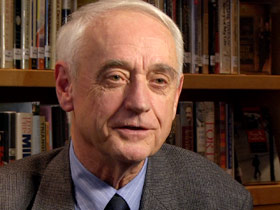 VALENTE: Grand Rapids has become a microcosm of global religious diversity. Its interfaith project is unique because it includes not only churches and religious organizations, but a public university, the art museum, the community theater, even the local newspaper. The Grand Rapids Press publishes weekly columns on interfaith understanding. The museum is exhibiting Salvador Dali’s prints of “The 12 Tribes of Israel.” And the symphony has hosted a number of events, like this performance of a Stephen Paulus oratorio commemorating the Holocaust. Leaders of the effort took pains to reassure religiously conservative groups that delving into other religions doesn’t risk diluting any one religion’s set of beliefs.

DR. KINDSCHI: One concept that I think is important, particularly for our community, is the difference between what I call “thin” dialogue and “thick.” Thin dialogue is where you try to get people to narrow their faith commitment down so thin that they can agree with everybody else. Karen Armstrong says all religions are basically compassion. Hans King says all religions are basically the Golden Rule. And there’s a place for that. There’s a place for seeing where the commonality is, but in this community with the strong religious traditions, the strong religious commitments on the part of individuals and organizations, we’ve talked about thick interfaith dialogue. Bring the thickness of your faith to the table. Talk about all that you believe. Don’t see how thin you can make your belief, but talk about the thickness of your belief, but do it in a spirit of understanding and a willingness to the other person to bring their thickness of their faith to it as well. 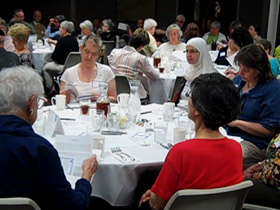 VALENTE: A major goal is to build deeper interpersonal relationships through efforts like the Tuesday Table Talks—regular dinner meetings between Jewish, Christian, and Muslim couples that take place in a Catholic spirituality center. The Tuesday Table Talks were an eye opener for Derek Atkins, who grew up in a church that discouraged exploring other faiths.

DEREK ATKINS: It was kind of one of those church settings where you kind of stuck with your own, you know, if you’re a Christian then you should hang out with Christians.

VALENTE: But at the dinners…

ATKINS: I was amazed at the generation that was there and to look now and see, because of this movement here, that they’re saying, “Wow, there’s such value in these conversations.”

VALENTE: At first some residents questioned having public institutions participate in interfaith activities. 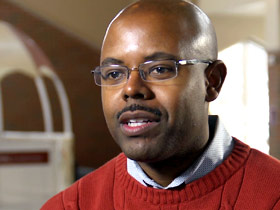 REV. KYLE RAY: I think there is a danger with going overboard in interfaith dialogue. There’s the great potential for universalism where we begin to believe that all roads lead to the same place. The reality is that if you would talk to major religious leaders, Jesus makes some exclusive claims that can kind of muddy the water whens when it comes to interfaith dialogue.

PASTOR DOUG VAN DOREN (Plymouth United Church of Christ): It’s quite the opposite of putting other faiths down. If you’re solid in your faith, then it doesn’t have to be necessarily the only way or truth. It could be a clear truth for us, and we can be solid in it, but then have other people be solid in their faith.

VALENTE: City officials estimate that as many as 30,000 of Grand Rapids’ 189,000 residents have attended interfaith events this past year. Community activist Ghazala Munir says the city has come a long way since her two children were the only Muslims in their school. In the 1990s, she tried to establish an interfaith group for mothers, but ran into resistance from other Muslims.

VALENTE: But now she’s part of a Muslim-Christian-Jewish group called “Sisters of Faith.” 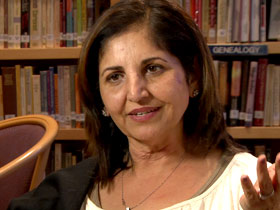 MUNIR: And so we meet once a month and we discuss ideas and we have speakers and we read different books. There’s just an amazing sort of a camaraderie there. It seems to me that no matter what you believe, it all comes out to be the same, our dreams, our hopes, our fears are all the same. So really there’s no separation then. Once you come to that level, that you start talking in these tones, then there is no separation, we connect right away.

VALENTE: In the coming year, the focus will be on the younger generation. These high school students are learning about the peace process that ended decades of sectarian violence in Northern Ireland. Many in the room have pledged to cooperate on social service projects with students of other faiths, or start interfaith clubs at their schools.

ELENA SCHMITT: The area I live in has a strong Calvinist influence and is very, very religious. Like we’re referred to as the Bible Belt sometimes, so I think bringing the things that I learn in this group to my area can really help people become more tolerant and open to different things.

ANNIKA ROLO: We don’t even have a cultural group at my school. So I think it would be cool to bring that into my school and educate other kids about the different religions that are out there and just let them to at least have a different perspective of even just what they’ve grown up in.

DR. KINDSCHI: I think it’s the high school students that are ready for this, and they’re the ones who have the most to gain by true interfaith understanding.

VALENTE: While fewer large scale public events are planned for this year, Grand Rapids’ interfaith dialogue will go forward with a variety of smaller individual projects, led largely by the generation about to come of age.