BOB ABERNETHY, host: Now a special report. Fifty years ago this fall, Pope John XXIII summoned church leaders to Rome for a series of meetings on how to make the church more relevant in the modern world. This Second Vatican Council, as it was known, produced some significant changes in Catholic life. Fifty years later, the legacy of Vatican II is still debated, and that debate has been evident in the current crisis between the Vatican and many US nuns. In April, the Vatican accused the umbrella group that represents the majority of American nuns of “doctrinal confusion.” But many of these sisters say they are just following the spirit of Vatican II. Kim Lawton reports.

SISTER MAUREEN FIEDLER (Host, Interfaith Voices): This isn’t something peripheral. This is central to the preaching of the Gospel. 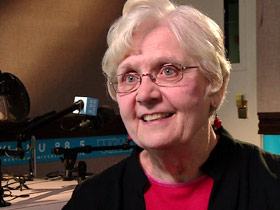 LAWTON: Fiedler entered religious life 50 years ago, just before Vatican II got underway. She says the spirit of the Vatican meetings had a profound impact on how she viewed her calling.

FIEDLER: The Second Vatican Council had a marvelous document called “The Church in the Modern World,” which basically underlined the message of justice and peace in the Gospel.

FIEDLER: It just all fit together as a piece for me, and it also fit together in my prayer as I tried to put this together with the Second Vatican Council. It simply made sense to try to alleviate the suffering of the poor, to end wars, to overcome discrimination. That for me was Christianity.

LAWTON: But some critics say many Catholic sisters have been using the Second Vatican Council to justify positions and activities that are in conflict with official church teachings. Colleen Carroll Campbell is a columnist and author. 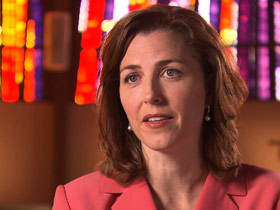 COLLEEN CARROLL CAMPBELL (Author, My Sisters the Saints: A Spiritual Memoir): This idea that having this Second Vatican Council and pronouncing that there’s this amorphous spirit that gives us license to pretty much throw the baby out with the bath water, so to speak, when it comes to Catholic doctrine—it’s simply wrong, and I think we’ve heard over and over from Pope John Paul II and Pope Benedict XVI that it’s wrong.

LAWTON: Pope John XXIII convened the Second Vatican Council in October 1962 in order, as he put it, to “open a window and let in a little fresh air.”

PROFESSOR COLLEEN MCDANNELL (Professor of History and Religious Studies, University of Utah and Author, The Spirit of Vatican II): Even though in the United States there were a lot of changes going on in the 40’s and 50’s after the Second World War, in worldwide Catholicism these changes really hadn’t occurred. And so in order to open up a window for the whole church, not just in modernized countries, this council was called.

LAWTON: Over the next three years, church leaders at the council produced 16 documents on a host of topics, from introducing local languages into the Mass to expanding lay involvement and promoting more interfaith dialogue. One of the documents focused on religious life. It encouraged Catholic sisters to reexamine their mission, their rules, even their style of dress. 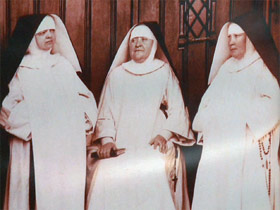 FIEDLER: It called us to go back and look at our foundresses and the spirit in which they started the communities, and when you look at those women who were foundresses, none of them are pussycats, I’m here to tell you. They were strong women who did things and started ministries that were, in many ways, unheard of in their own day.

LAWTON: Many US sisters began modifying or even eliminating the traditional habit. The clothing changes for prioresses of the Dominican sisters in Amityville, New York, were dramatic.

SISTER MARY HUGHES (Dominican Sisters of Amityville): You’ll see in the early years it was very much the same, and then there were some modifications, and then right after Vatican II, immediately, Mother Francis Maureen Carlin is in the modified habit completely, Sister Irene Garvey is in a white suit, and then from Mary Ryan on you’ll see suits, you’ll see various forms of clothing.

LAWTON: Sister Mary Hughes is the current prioress. She says even more than clothing changes, Vatican II urged nuns to get out into the community. 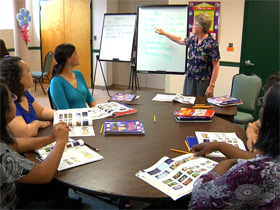 HUGHES: I think that’s one of the great gifts of Vatican II—that it sent us back to study what the Gospels were saying, and over and over again it was about feed the hungry, visit those in prison, help the poor.

LAWTON: The Dominican sisters in Amityville have a variety of ministries designed to help those at the margins, such as literacy classes to teach new immigrant women English. There are homes to help women and children with nowhere else to live, and there’s even an organic garden, where about 20 percent of the produce is donated to an interfaith food network.

Under an umbrella organization called the Leadership Conference of Women Religious, or LCWR, many communities of nuns began shifting their ministries in the wake of Vatican II. For some sisters, it was an exhilarating time. But others were concerned.

MCDANNELL: There was a minority of women who didn’t feel that the changes were appropriate, that the adaptations to modern life, the moving out of the parish into the world, that these movements had gone too far. 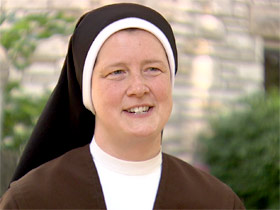 SISTER MARY JOSEPH HEISLER (Carmelite Sisters of the Divine Heart of Jesus): The Vatican II documents are a pretty straightforward read. I think the difficulty comes when you don’t read everything in context, perhaps. I would find it difficult to read the documents, then come up with them saying something more than what they say.

LAWTON: The LCWR still represents about 80 percent of the some 57,000 American nuns. The group has increasingly taken on advocacy positions, including some that are controversial.

MCDANNELL: These are the sisters that publicly stated to John Paul II that women should be ordained, that women should be allowed to work in all the ministries of the church. This is the same organization that signed the New York Times letter which said that there is a legitimate, diverse opinion on the question of abortion.

LAWTON: Sister Mary Hughes is immediate past president of the LCWR and still part of its leadership team.

HUGHES: Are there persons who have divergent opinions? I think that’s true in the whole church; it’s not just true in religious life. I think sometimes there’s a concern if we raise a question that means that we are in defiance, and that’s not at all what happens. But I think we’re going to continue to raise the questions, because there might be areas that we would hope the church would look at. 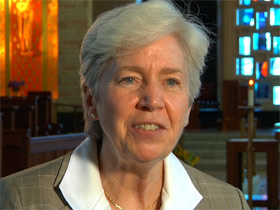 LAWTON: In 2008, Vatican officials began an investigation into the lives and doctrine of US women religious. This past April, the Vatican released a report accusing the LCWR of having “serious doctrinal problems.” The assessment specifically criticized the group for being largely silent on right-to-life issues, and it mandated that the group come under the authority of some US bishops.

HUGHES: We’re stuck with a situation that a mandate that we are not happy about, that we answered all the questions that we’re given to us in the doctrinal assessment honestly, carefully, prudently, and when we didn’t hear back, I guess we thought that we were believed. And I think there are aspects of the mandate that make us wonder if our materials were read.

LAWTON: For example, Hughes says she believes there is more than one way to promote the sanctity of human life. She says her community’s ministries against domestic violence and in support of homeless mothers and children is also prolife work.

HUGHES: That’s about the sanctity of human life. It’s about doing it differently. I think it’s complementary. I don’t think you can have one without the other.

LAWTON: Others say that’s not enough. 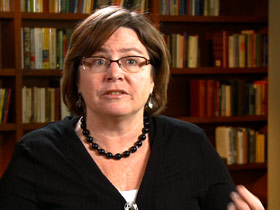 LAWTON: Professor McDannell says since the death of John the XXIII church leaders have appeared to be consolidating authority.

LAWTON: Some wonder if there is any room for dialogue and debate.

FIEDLER: This is not just about the Vatican versus the nuns. This really is about the future of how we interpret the message of the Second Vatican Council, and what’s going on right now quite frankly makes me sad, because I see certain people in Rome, in the Vatican, who want retrenchment, who want to go back to the church the way it was before the Second Vatican Council, when the church was essentially the hierarchy, and they determined everything down to sometimes the minutia of Catholic life.

CAMPBELL: Women religious need to stand with the Church, and if they don’t feel that they can in good conscience do that anymore then I think it would take more integrity to simply step back and say, you know, maybe we’re not called to be Catholic women religious anymore. Maybe we want to be something else.

LAWTON: Many lay Catholics have been rallying in support of the sisters. Hughes says they been getting letters of encouragement from across the country. She says she remains hopeful that, in the spirit of Vatican II, healing can prevail.

HUGHES: There’s always a blessing that comes with every conflict. Perhaps the blessing is that we continue to open up within the Church avenues for true dialogue and true dialogue isn’t about winners and losers. It’s about people truly being able to listen to understand the other perspective before making any judgments.

LAWTON: LCWR members will be meeting in St. Louis in early August to discuss their official response to the Vatican assessment.