BOB ABERNETHY, host: More about the week’s religion and ethics news now from Kim Lawton, managing editor of this program, and David Gibson, national reporter for Religion News Service, who joins us from New York. Welcome to you both. David, out of all the tragedy in Colorado there has emerged another debate about gun control. Should it be considered a pro-life, a right-to-life issue like abortion? What are people saying?

DAVID GIBSON (Religion News Service): Well, this debate, Bob, was really prompted in the hours after the shooting by a column by Father James Martin, a Jesuit at America magazine, popular author, who wrote an essay saying, look, gun control and gun violence is a pro-life issue as much as abortion, as the death penalty, as euthanasia, and pro-lifers, traditional pro-lifers should get behind it in that context. Well, of course, again, of all the many debates that have come out of this horrific episode that opened up another branch in the moral and religious realm in our society, with a lot of people pushing back and saying no, abortion is the paramount pro-life issue. Anything else would be a distraction. So you kind of had an interesting paradox almost of pro-life folks who are arguing for restrictions on abortion saying there should be no restrictions on guns. And then you had a lot of liberals who favor the right to abortion saying no, we should have restrictions on guns.

KIM LAWTON, managing editor: And it sort of highlights a debate that’s been going on among evangelicals and Catholics in particular about this hierarchy of the life issues. And we saw this also in the discussions between the nuns and the Vatican. Some people say if everything is pro-life then it really loses the meaning and that there is a hierarchy of life issues and abortion should be at the top and these other issues shouldn’t. So this situation sort of highlighted that ongoing debate. 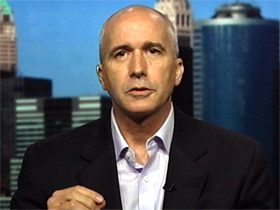 ABERNETHY: David, another discussion or debate that came out of the Colorado thing was whether what happened was evil or whether whatever happened is the kind of thing that we ought to be able and should do something about so that it won’t happen in the future, that we have the power to act and repair the world if we can, as opposed to being helpless if it’s evil and nothing we can do about it.

GIBSON: Yeah, and Bob, it almost kind of goes back to the old faith-versus-works debate in Christian theology about, look, was this just a spiritual crisis, a triumph of evil, almost demonic possession some would say, that you really have no control about? This is “suffering happens.” Evil happens in the world. It’s about how we deal with that in the aftermath. Or whether, look, it’s not just about praying for victims and praying to hope that this doesn’t happen again, but also working as believers to, as you say, repair the world, to institute perhaps better gun control laws or make public policies that would prevent this kind of gun violence from happening again. You had a real fierce, really religious debate at the heart of this.

ABERNETHY: Meanwhile, in Philadelphia, Monsignor William Lynn became the first Catholic official in the country to be convicted of a crime for covering up sex abuse by some of the priests that he supervised—three to six years he got. David, Kim, what’s being said about the severity of that sentence? 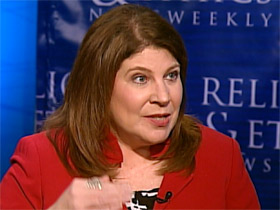 LAWTON: Well, you had some people arguing that maybe this was too severe. One of the priests that he was accused of sheltering got less time than he did, so there was some concern about that. But also in a week when you also saw the Penn State punishments coming down, there was some discussion about accountability, and is it institutions that should be held accountable or individuals, and who all is harmed? And certainly we saw with the Catholic Church there have been some concerns by some of the victims groups that there hasn’t been enough accountability at the top of the institution, and so that came out again this week.

ABERNETHY: And at Penn State it seemed like, to many people, like a kind of a blanket punishment rather than, as you say, singling out the people at the very top who could be held responsible.

LAWTON: Well, and there are some in the Catholic Church that would argue that a lot of people in the Church also ended up suffering the consequences of the situation.