Read an excerpt from FRANCIS OF ASSISI: THE LIFE AND AFTERLIFE OF A MEDIEVAL SAINT by Andre Vauchez

FR. LARRY DUNHAM, OFM (Franciscan Monastery of the Holy Land in America): This is our first Sunday to gather as a Catholic community to pray for our new pope, Pope Francis. The name he chose after St. Francis of Assisi certainly gladdens the hearts of all Franciscans.

One reason why everyone takes Francis to their heart is because he is not perceived specifically as a Catholic Saint, he’s not perceived as specifically belonging to Christian people but he seems to be someone that appeals to all men and women regardless of their religious background or lack thereof. 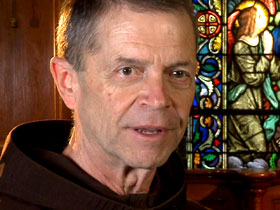 Francis considers himself to be a brother to everyone. He found God’s life not only in every man or women but in all creation so every living thing. And so he could preach to the birds and he could preach to the forest. He even found God in inanimate creation, the rocks and the fields, everything contained God therefore all of the environment is worthy of respect.

He had his own very special vision that kind of launched him. He’s praying in front of this icon, this icon cross in the chapel, in Italian San Damiano, but St. Damians and suddenly says the icon, the figure of Jesus speaks to him “Francis, go and repair my church.”

Francis left the city of Assisi, goes out and put on the garb of the peasants. This wasn’t a fancy habit this is what the poor wore. It had a hood for the elements. He had a rope just to hold it together so he simply clothed himself in the garb of the poor. 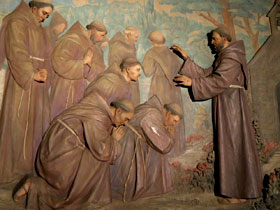 Our new Pope Francis has a reputation for service and love of the poor in Argentina, in Buenos Aires and taking the name St. Francis reminds the church of the poor who shall always be with us as scripture says, and the poor whom Jesus specifically lived among, reached out to, reached out to all people, but the poor were his special charges.

St. Francis, when he wanted to go on crusades and come to hopefully meet the Sultan, he did it again out of his conviction that the Sultan would be his brother and that he could cross the divides that separated them and he was able to do so. That interfaith dialogue made them really brothers. I really have hope that the Pope Francis taking the name of Francis of Assisi will re-invigorate the interfaith dialogue of our church, give it new spirit and a renewed purpose.

I do hope that Francis, Pope Francis can lead us to a simpler vision of following Jesus that we can focus less on the trappings and more on the poor themselves. That we can look to the way Francis did of pulling people into the church, that we’d be known for including and not excluding. That’s my biggest hope.

FRANCIS OF ASSISI: THE LIFE AND AFTERLIFE OF A MEDIEVAL SAINT by Andre Vauchez

Read an excerpt from a recent biography of Francis of Assisi: 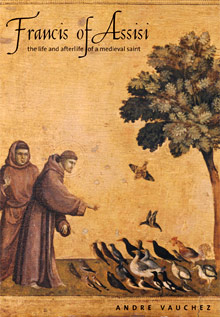 Francis did not limit himself to charity toward the disadvantaged of his own day; rather, he wanted to share their condition and become the brother of the poor by living with them and for them. His rule is marked by an unconditional rejection of the desire for power and enrichment, and through the movement that he launched he sought to lead the church back to the ideals of the poverty and simplicity of its apostolic origins. This choice has had social implications; was not the first public act of Francis to break with the “pre-capitalistic” society of his time and with the avarice—in the medieval sense of the term, the cupidity—of his father? We find an echo of this in his diatribes against money, which he blamed for being the source of injustice and exclusion, to the degree that it contributes to the marginalization of those who do not possess it. But for all that, he did not exalt misery but sought to bring forward a remedy for it through fraternity and solidarity with those who were immersed in it. The radical poverty desired and lived by Francis is a means of realizing perfect fraternal justice. The Franciscan order did not understand this central intuition of its founder. It remained faithful to it only superficially, for if the order never stopped talking about poverty, it quickly became an abstract notion and the object of endless discussions about what one could possess or use without violating the rule. It could not have been otherwise, once poverty was no longer lived by the friars as a concrete sharing of the life of the forgotten of society. To rediscover the authentic spirit of Francis today, his spiritual sons and the Church must make common cause with the poor against their poverty and participate in their struggles.

From “Francis of Assisi: The Life and Afterlife of a Medieval Saint” by Andre Vauchez (Yale University Press, 2012)