LUCKY SEVERSON: This would have been an unlikely occurrence only a few years ago: 80 clergy and lay leaders from a broad range of religions across the U.S., converging on Capitol Hill to lobby Congress about climate change and protecting the environment. They are all part of a national organization of faith leaders known as Interfaith Power and Light, or IPL, which was founded by the Reverend Canon Sally Bingham, an Episcopal priest.

REV. SALLY BINGHAM (Interfaith Power & Light): We started out asking congregations to respond to climate change. And as more and more religions got involved, we realized what we were actually doing was bringing religions together where they could all agree on something. There were Hindu, Baha’i, Mormons, Catholics, evangelicals, Protestants, Jews, Muslims all agreeing with each other, we are the stewards of creation.

SEVERSON: Altogether there are now over 14,000 houses of worship in 40 states connected to IPL. Places like Adat Shalom Congregation in Maryland. Fred Scherlinder Dobb is the Rabbi and he says religion is deepening his congregation’s concern for the environment. 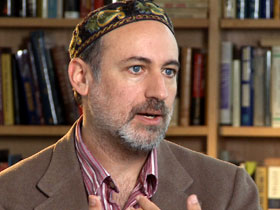 RABBI FRED SCHERLINDER DOBB (Adat Shalom Reconstructionist Congregation): Ultimately love of the creator and love of that which God has created are one and the same. If you don’t love creation what does it mean to say that you love God who so loved creation?

SEVERSON: Sarah Jawaid is the director of a Washington area group called Green Muslims, made up of young professionals like herself—she’s an urban planner.

SARAH JAWAID (Green Muslims): It’s an issue that isn’t a priority for a lot of the communities that we see. Mosque leadership, you know, they’re just now starting to talk about it. You see it more and more on university campuses, but it’s a recent, recent phenomenon.

SEVERSON: Reverend Bingham says she became a priest because God called her to speak out on the environment when no one else was.

REV. BINGHAM: They’re afraid to get into the pulpit and talk about something that they really don’t know a lot about. But how can you sit in a pew and profess a love for God and then watch, sit back and watch creation be destroyed? 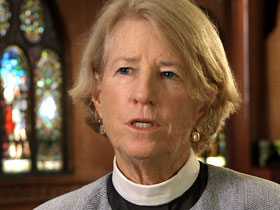 SEVERSON: These Pennsylvania IPL members are practicing what they preach. They bicycled 200 miles from State College, Pennsylvania to Washington, stopping at churches along the way. They are here to lobby Congress to strengthen environmental laws. Jon Brockopp is a professor of History and Religious Studies at Penn State.

JON BROCKOPP (Pennsylvania Interfaith Power & Light): If you talk to people about their major faith experiences, something like 90% of people will think of something that happened to them out in the woods, on a mountain somewhere, somewhere along the beach. There’s something about the natural environment, the environment around us right now, that really speaks to people and speaks to us of a higher power.

SEVERSON: The Green Muslim board members meet once a week to discuss teachings from the Qu’ran and Hadith about protecting the earth. Sarah says the prophet Muhammad was a tree hugger literally because he actually hugged a tree after he heard it wailing.

SARAH JAWAID: It just showed so much about his character as a compassionate being and it helps me be more compassionate and to really live more lightly in this world. 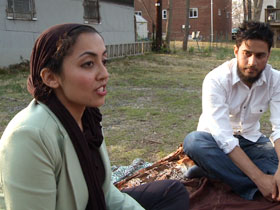 SEVERSON: They also get their hands dirty, working at a local farm, cleaning up parks and renting out reusable dinnerware.

JAWAID: We started renting out reusable dinnerware as a way to get individuals to lessen their waste during Ramadan. And so instead of wasting a bunch of Styrofoam, we actually take our tableware and we’ll take it home and wash it. We had about 600, 700 people over the month that were using it and that’s a lot of waste that was reduced.

SEVERSON: They say it’s their faith and scriptures and not their politics that drive their views on the environment.

RABBI DOBB: Deuteronomy, chapter 20, verse 19. It’s a law in wartime about not cutting down the enemy’s trees even when it could give you military advantage and perhaps even save combatants’ lives. If we’re not allowed to cut down a tree that belongs to the enemy under such direct circumstances, how much more should we not allow trees to be felled simply for the convenience of the international economy.

REV. BINGHAM: Very often we have a bigger impact with a congregation by talking to them about, “Do you want to save money on your energy bill?” And very seldom does a congregation say, “Oh no.” They usually say yes, how do we do that? 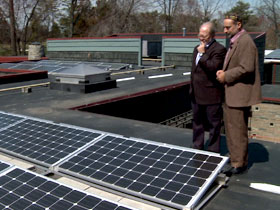 SEVERSON: A number of houses of worship that belong to IPL combine their purchasing power to buy cheaper electricity from renewable energy at rates which can amount to huge savings especially for larger churches. IPL also encourages utilizing renewable energy like the solar panels on the roof of the Adat Shalom Synagogue.

RABBI DOBB: We have saved many thousands of dollars over the course of eleven years running this building because of passive solar technology, because of sensitive lighting we put in place. It absolutely keeps operating costs down. So if you make an investment in something like a really efficient boiler, it makes a tremendous difference.

REV. BINGHAM: We are asking our congregations to serve as examples to the community, and the hope is that when the religious leader can tell his or her congregation that they’re saving money on energy that people will say, “Oh, I’ll go home and we’ll do some of these same things in our homes.”

SEVERSON: Reverend Bingham says in the beginning of her ministry she faced a lot of resistance.

REV. BINGHAM: I was accused of promoting world government. I was called a communist. I was accused of taking a political issue into the pulpit which was highly against anything Americans believe in, merging church and state. But I haven’t. That hasn’t happened in the last 5 to 6 years. 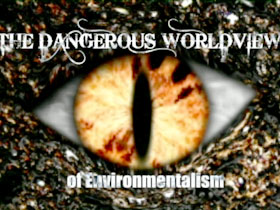 SEVERSON: There’s still pushback from some churches and groups with religious and political connections like the conservative evangelical Cornwall Alliance.

FEMALE NARRATOR: (from Resisting the Green Dragon video) “Its twisted view of the world elevates nature above the needs of people of even the poorest and most helpless. With millions falling prey to its spiritual deception. The time is now to stand and resist.”

REV. BINGHAM: It’s complete nonsense. I mean, you can go into scripture and find that God put Adam in the garden to till it and to keep it and we are the gardeners. We have not done a very good job and I would dispute anything that is behind the Green Dragon.

SEVERSON: The Cornwall Alliance produced the Resisting the Green Dragon series and sent them to churches around the country.

BEISNER: (from Resisting the Green Dragon video) “The average poor household spends a much higher percentage of its budget on electricity and other energy sources than does the average middle class or wealthy household. That means when we raise the price of energy, we are hurting the poor more than we hurt everybody else.” 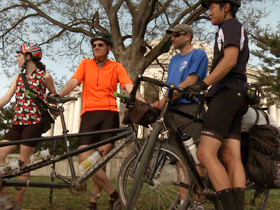 SEVERSON: Dave Hunter takes a view opposite of the Cornwall Alliance video. He thinks the poor, particularly in others countries, will be hurt the most if something is not done about climate change.

DAVE HUNTER: If we don’t do anything about climate change the people who are going to be hit most by that are the people who have the least. And so to me that becomes a moral issue.

RABBI DOBB: Climate change is going to cause food scarcity, the likes of which we have never seen.

SEVERSON: Just outside the Adat Shalom Synagogue, the congregation has built and is expanding an organic garden where members are taught how to grow their own vegetables and donate part of what they harvest to food pantries. Rabbi Dobb says observing the Sabbath or Shabbat as God did after he created the earth is one way to help preserve it.

RABBI DOBB: One day in seven is of course Sabbath and that is a day of just being, not of doing. It’s a stepping back from the rat race of production and consumption and as Jews it’s our most special time.

SEVERSON: Sarah Jawaid thinks the cluttered and polluted world around us is a reflection of what’s going on inside ourselves, and that the best way to find ourselves is in the quiet and beauty of nature.

JAWAID: When I pray, I feel the most connected when my prayers are outside or when I’m thinking about a natural setting, things like that. I feel God’s presence in those moments. I mean, He’s everywhere all the time and different parts of the faith speak to different people, but that speaks to me.

SEVERSON: On Capitol Hill, lobbyists from Interfaith Power and Light are becoming a fixture.

REV. BINGHAM: Even if they don’t persuade them in that meeting, they may be able to next time. If we can point out to skeptical legislators that this is a real issue, it’s not going away, they have a moral responsibility to serve the American people, and if the American people want climate legislation and want clean air and clean water, they’ll come around.

SEVERSON: She says if enough houses of worship join the effort, Interfaith Power and Light will become a force of nature. For Religion & Ethics NewsWeekly, I’m Lucky Severson in Washington, DC.