KIM LAWTON, correspondent: At Thursday’s interfaith service, local religious leaders prayed for the healing of their city in the wake of the attack.

CARDINAL SEAN O’MALLEY (Archdiocese of Boston): We must overcome the culture of death by promoting a culture of life, a profound respect for each and every human being made in the image and likeness of God. And we must cultivate a desire to give our lives in the service of others.

LAWTON: Within moments of the bombing, clergy and faith-based groups mobilized to do what they could to help. As victims of the bombing were brought to Tufts Medical Center, Interfaith Chaplain Mary Lou Von Euew was on site to offer counseling and prayer. She says one injured woman expressed what many were feeling.

CHAPLAIN MARY LOU VON EUEW (Tufts Medical Center): She said “the hardest thing about this is that some human beings can treat other human beings like this. I just don’t understand it.” 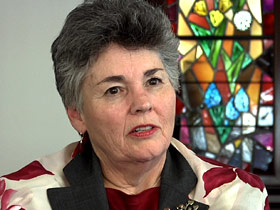 LAWTON: Indeed, Von Euew says, after a tragedy like the bombing, clergy often hear age old questions about the nature of good and evil, suffering and the existence of a loving God.

VON EUEW: You know most of the time people deep down inside aren’t asking for an answer. They’re asking for you to fight and wrestle with the questions with them. We truly believe that God is with us when it happens, so we’re not suffering alone, that we have someone with us who loves us beyond all measure.

LAWTON: Rabbi Yitzhak Korff, Chaplain for the City of Boston, is helping to oversee counseling for first responders.

RABBI YITZHAK KORFF: It’s important that these people understand once they have fulfilled their duty to the citizens, the people they are serving and protecting and saving and making to feel safe and secure, they need to face any feelings that they might be having as well.

LAWTON: He says many of the victims and first responders are still in shock and will deal with theological questions later. Even then, he says, there will be little ultimate satisfaction. 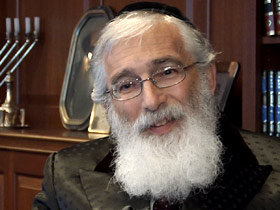 KORFF: The macro answer is, we don’t know God’s plan. I don’t know of anybody that God’s called and said, “Here’s the deal.” And so there’s an unknown. And prayer and meditation can help bring a sense of calm.

LAWTON: Muslims in Boston, and across the US, were quick to condemn the bombing. Imam William Suhaib Webb of the Islamic Society of Boston Cultural Center says all the members of his mosque felt the attack.

IMAM SUHAIB WEBB (Islamic Society of Boston Cultural Center): They felt very violated, and they felt the sacredness of the city was violated and that the trust of our populous was violated, so there was a sense of wanting this person to be caught and subjected to justice.

LAWTON: Webb helped organize the interfaith prayer service and urged his congregation to donate blood and find other ways to serve those who are suffering.

WEBB: Reminding people of God’s wisdom then also reminding that we are not allowed to use his wisdom to be placid or inactive. We have to go out and help and work and be positive and stay involved. 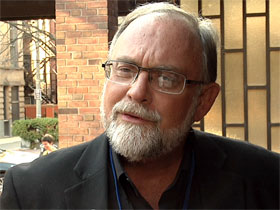 LAWTON: The ministry took the specially-trained dogs to Boston hospitals to visit victims and their families, and set up a petting station at a local church. Ministry leaders had also taken the dogs to Newtown, Connecticut after the school shooting.

HETZNER: Whether it’s a bombing or a shooting or divorce or death, whatever happens in life, which life throws stuff at us, they bring the mercy and the compassion of Christ and comfort to people that need to work through whatever it is they’re facing.

LAWTON: Rabbi Korff says the bombing had a profound spiritual impact on the city.

KORFF: We rely on a sense of knowing if I do this then this is what’s going to happen. And so, that’s what gets upset, what upsets the balance in these critical incidents, and that’s what needs to be restored as quickly and as easily as possible. 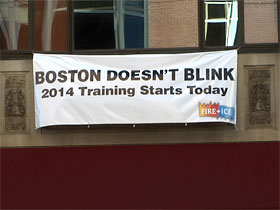 LAWTON: He and other religious leaders urged the community to come together in grief and then move forward with a new sense of hope. I’m Kim Lawton reporting.

BOB ABERNETHY, anchor: We want to talk now via Skype with Reverend Samuel Lloyd, the priest-in-charge at Trinity Episcopal Church, right in Copley Square in Boston, where the bombs went off. We are old friends. Sam, welcome. What can a pastor say to his people at a time like this, a terrible time like this, and what are people saying to you?

REV. SAMUEL LLOYD (Priest-in-Charge, Trinity Church): I think the pastor first needs to acknowledge what a trauma this has been and listen carefully to what people are saying and what I hear a lot is a sense of the fragility of people’s lives and their sense of how vulnerable they’ve been. And so what I have been doing and will continue to do as I’m with my community is to remind them of the core convictions of a power behind all of life that is sustaining us and our faith in a God who goes with us even in the toughest of times and promises always to bring healing beyond the crisis at hand.

ABERNETHY: What about the old questions of where was God in this and how could God have permitted so much suffering? Are you hearing that at all?

LLOYD: I’m not hearing it as much as I did after 9/11. It’s more people’s sense of fragility but when those questions come they always invite an explanation of the fact that we are people who’ve been given extraordinary freedom, we in this human race, and with that comes the enormous possibility of love and delight and also the kind of terror we’ve seen. 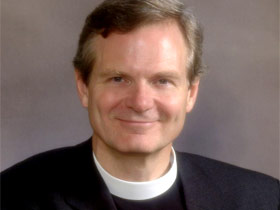 ABERNETHY: And also comes the ability to do terrible things.

LLOYD: That’s right. To do unimaginable damage and yet that’s never the last word.

ABERNETHY: People around the country are being told by officials and pastors to pray for the people of Boston. What do you suggest we pray for?

LLOYD: Prayer is an enormously important gift in this time because it binds all of us together as a country. I think it’s a great gift that people are praying for the people of Boston. I’d ask them to pray for courage and strength as we continue to make our way through a time of trauma. I’d ask for them to pray for a sense of our own connectedness to each other. And I’d ask them especially to pray for the magnificent police, law enforcement people, medical people and first attenders who have done an amazing job and continue to be doing crucial work. They are a model for us all.

ABERNETHY: But the thing I’m interested in, that the primary thing that you’ve been hearing is fear and what do you say about how faith can cope with that?

LLOYD: Well one of the first things I say is that fear loves isolation and what we need to do is be in touch with each other so I’m encouraging my community to text and email and call people they know and love and care about, get together as they can because we are reminders to each other of the faith we carry and the trust we’ve known and the love we’ve known through the years that gives us the courage to continue on in what we’re doing. The second thing I do is I try to send them even back to their old scriptures where the psalm for this Sunday is the Lord is my shepherd, I shall not want and I’m sending everyone back to be reading that day and night these days to be reminded that there’s someone holding us.

ABERNETHY: Anything good that you see coming out of the response to this terrible thing?

LLOYD: You know, amazing, there’s been immense good. It’s just, just as when the sky is at its darkness we can see the most light. In this dark time, we see the love and care that emerges. I’ve been thinking a lot about what Mr. Rogers said in response to 9/11. Someone asked him what his advice was and he said keep your eyes on the helpers and if you look at the helpers, you’re seeing this a story of enormous courage and compassion and devotion that makes you proud to be a Bostonian and proud to be a human being and grateful for a God of love working through all of this.

ABERNETHY: Reverend Samuel Lloyd, the priest-in-charge at Trinity Episcopal Church, in Copley Square in Boston. Sam, many thanks.