KATE OLSON, correspondent: For most of its 160 year history, San Quentin has been known as a tough place to do hard time. But over the past two decades, this has begun to change.

Thanks to thousands of engaged citizens in the surrounding community, a growing number of innovative programs aimed at reducing violence and recidivism are having an impact.

One of those programs was started by this man, Jacques Verduin.

JACQUES VERDUIN (Psychologist): There’s a growing alienation and a lack of sense of belonging for most people in society. It seemed that nowhere else stronger than in our prison system had we turned our backs on each other. 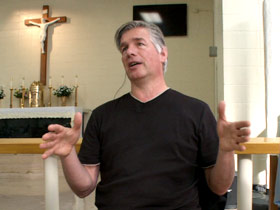 OLSON: A psychologist who has practiced meditation for many years, Verduin created a program called GRIP—Guiding Rage Into Power. The year-long initiative seeks to help prisoners address the root causes of their violent behavior and make the journey of transformation from violent offender to peacemaker, from the inside out.

VERDUIN: (to inmates) Is home just four walls and a roof on the outside? Or is home a state of mind as well? Can you go home before you leave? Can you leave prison before you get out?

ELIZABETH SIGGINS (Dept. of Corrections and Rehabilitation): The reality is that the parole board does not grant parole very easily. So for many of them they don’t actually know when they will get out of prison. And I think what the GRIP program has done is offered them a way to not be trapped by that, to realize that they’re living their lives now, that they’re still part of a community. It’s not the community outside the prison but it’s the community inside the prison.

OLSON: Elizabeth Siggins, who visited San Quentin the day we were there, is a senior policy adviser in the Department of Corrections and Rehabilitation for the state of California. 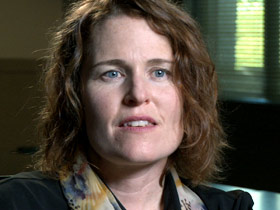 SIGGINS: When you work in a prison system, you don’t think that you’re going to go sit in a group of offenders and close your eyes. And when I was sitting there today I thought, I feel safe…

OLSON: Creating this safe environment is the responsibility of the prisoners who understand that the program belongs to them.

ROBIN GUILLEN (Inmate): (speaking to group) My name is Robin, and I’m a peacemaker.

OLSON: Fellow inmates, like Robin Guillen, who are graduates of the program, guide the weekly sessions.

GUILLEN: (speaking to group) That’s part of what we explore here and discover about ourselves on why we acted violently.

OLSON: Guillen has served 40 years in prison—20 of them here at San Quentin—for a murder he committed at age 17. After witnessing a stabbing outside his cell, he made a decision to turn his life around beginning with facing his painful past. 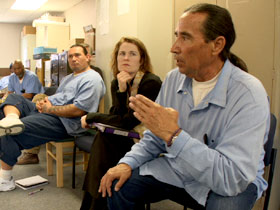 GUILLEN: My father and my cousin were in a fight in the living room. My father stabbed the cousin in the living room many times. And I’m sitting there, crying, blood curdling cries, out of sheer fear, terror. That was the first experience of original pain.

OLSON: To help the new class of prisoners understand how pain and suffering from their past can trigger violent behavior, Robin prompted others to share their experience.

GUILLEN: How many of you suffered from trauma early on in life, as far back as you can remember, as an adolescent, as a little one? 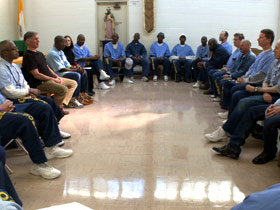 VERDUIN: See if you can connect the emotional feeling with some sensation in your body.

OLSON: Through a practice called “sitting in the fire” the inmates learn to face painful emotions from their past.

VERDUIN: (speaking to group) So breathing in, I welcome this feeling. I feel this fear, this grief, this anxiety.

VERDUIN: In my experience in working in San Quentin, I saw that it was often difficult strong emotions that propelled people in a life of crime and addiction and trying to medicate what you could otherwise process. “Sitting in the fire” in essence, basically is a movement of responsibility, where you say, “The causes and the origins of this feeling lie within me,” so you can stop blaming.

GUILLEN: And see that’s the whole piece, is to be able to feel what’s going on, to be able to really address, internally, what is this feeling? Where is it coming from? And how I’m going to respond versus react.

OLSON: Focusing on the breath, this practice draws on the contemplative tradition in many of the world’s religions. 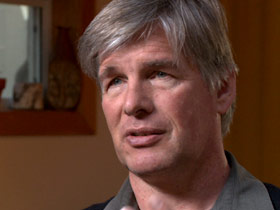 VERDUIN: We talk a lot about breath and spirit being the same thing. So to sit in the portal of feeling the movement of breath, of spirit as it enters and passes through, is a practice that orients us on a very deep level.

GUILLEN: It’s kind of like you know sitting with myself and allowing God to love me. You know, things may not be all good all the time, but you have something to draw from. You can ground yourself and breathe.

OLSON: Making amends to families of their victims is also part of the journey in GRIP, and to the experience of inner freedom for Guillen.

GUILLEN: I have character defects, flaws, and I’m imperfect. But I have a walk and I have a commitment to honor. And to honor those people that I’ve hurt. And I have something to give. And I could either give it in here, or I could give it out there.

SIGGINS: This is 52 weeks of very difficult self-exploration. Not only do the facilitators hold the men accountable, they do hold each other accountable, and ultimately, the success of the program is whether or not after they’re done they really do stick to that commitment of non-violence. 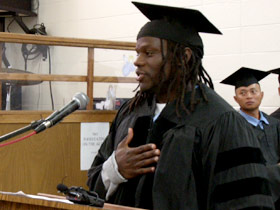 VERDUIN: I think it’s an enormous gift to a community to bring back groups of men that have been imprisoned and the gift is to say, these are safe men. Not only will they not create conflict and violence in your community, they can help resolve it and de-escalate it.

OLSON: This gift was evident in the testimonies at the graduation ceremony of last year’s GRIP class.

VAUGHAN MILES (Inmate): My name is Vaughan. I’ve been incarcerated for 18 years for taking the life of Kneeck. Through all that hurt and you accept that responsibility for that, they got a part in there called “sitting in the fire,” so you sit through all them emotions and I got to see all the ugly that I did. Also what it helped me do is to look back and find my authentic self, to look back at that kid that used to cry when his hamster died and allow that person right there to come forth and shine and guide me. And if I can stop another Kneeck from being murdered and another Vaughan from murdering somebody, then I did my job.

OLSON: The “diploma” the graduates received is their pledge to a code of attitudes and behavior to turn a life of violence into being a peacemaker.

In a closing ritual, supporters welcomed the graduates into the community as peacemakers, ready to give back.

For Religion & Ethics NewsWeekly, this is Kate Olson reporting from San Quentin.