DEBORAH POTTER (Correspondent): At first glance, the Front Porch Cafe could be any neighborhood coffee shop. But the make-shift kitchen isn't quite up to par, and those guys at the grill aren't your typical cooks.

JON SCYOC (Former Inmate): I actually have a small felony on my record. Well, it’s still a felony. And I know how hard it was for myself to get jobs.

THOMAS JONES (Former Inmate): Since I had my felonies I been having real poor jobs. And I chose to do street life, and street life is nothing but trouble—death, jail, or, you know, both.

POTTER: Most of the workers here are ex-offenders. The cafe is run by South Street Ministries, a Christian fellowship that also offers Bible study for inmates.

POTTER: A place to live, a job, even just a "welcome home" are hard to come by when you've been where some of these men have been. 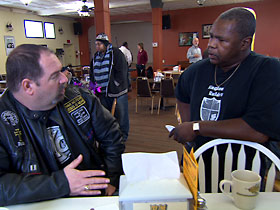 POTTER: Perry Clark now runs a construction business. Michael Starks is a community organizer. Both former drug users say they went straight after finding faith behind bars but that when they were locked up the churches they knew were not on their side.

STARKS: The church was of the mindset that, hey, he did wrong, he's being punished. They thought that if you did wrong, you went to prison and that was it, and they were going to throw away the key.

CLARK: I wrote three churches to let them know, not asking for anything, that I was reentering back into the community after ten years of incarceration. And I didn’t get a response back.

CLARK: I want them to know that they can live normal life once they out.

(Speaking with woman) It's not easy, though, when the problem is enormous. 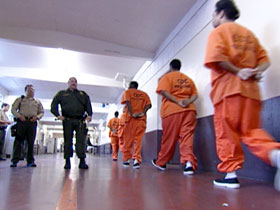 POTTER: More than two million Americans are now imprisoned, four times as many as 30 years ago. The major reason: mandatory sentencing for non-violent crimes and drug charges. But the war on drugs, declared in the 1980s, has not had the effect its backers predicted. Arkansas Circuit Judge Wendell Griffen has seen the results.

JUDGE WENDELL GRIFFEN (Arkansas Circuit Court): Drug use has not declined. All it has done has produced an explosion on our prison population. The whole mandatory sentencing guideline mantra was sort of like the Kool-Aid that we should never have drunk.

POTTER: Behind bars, the racial disparity is striking. Black men are six times more likely to be imprisoned than whites, especially for drug offenses, even though the rate of drug use is only slightly higher for blacks. Law professor Michelle Alexander, author of the book, "The New Jim Crow," says the nation faces a human rights nightmare more than 40 years after the end of legal segregation.

MICHELLE ALEXANDER (Author, "The New Jim Crow"): In cities like Chicago, more than half of working-age African-American men now have criminal records, and they can be legally discriminated against for the rest of their lives in employment, housing, access to education, and public benefits. So many of the old forms of discrimination that we supposedly left behind in the Jim-Crow era are suddenly legal again once you’ve been branded a felon. 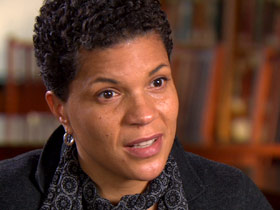 POTTER: In the 1960s, ministers like Dr. Martin Luther King, Jr. were in the forefront of the civil rights movement. There's been no similar movement to end mass incarceration.

ALEXANDER: I think Dr. King would be just so deeply saddened and appalled by what we’ve allowed to happen in this country in the years since his death.

TOM NAVIN (Social Action/Prison Ministry, Catholic Diocese of Little Rock, Ark.): We’re told to visit the prisoner, and so that goes with what we do and who we are.

POTTER: Tom Navin oversees prison ministries for the Catholic Diocese of Little Rock, but he says Jesus' command to care for prisoners is not widely followed.

NAVIN: We’ve gotten people to be interested in prison ministry and contribute money to us and pat us on the back, but it’s really tough to get people to volunteer to go into the prison. That’s really a tough sell. 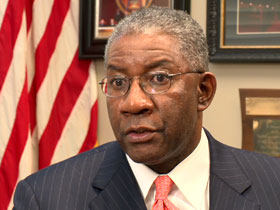 ALEXANDER: Just as in the days of slavery it wasn’t enough to shuttle a few to freedom, today we’ve  got to work for the abolition of the system of mass incarceration as a whole and that means, in my view, that the church has got to find its prophetic voice in the era of mass incarceration and really call on politicians and policymakers to undo the massive tragedy that has been done.

POTTER: Some legal reform is underway. States from Ohio to California have approved early release programs and lower penalties for lesser crimes, changes driven largely by the high cost of keeping so many people behind bars.

ALEXANDER: I think Martin Luther King Jr. was right when he said we have to be careful of doing the right thing for the wrong reasons. If we can afford once again to lock people up en masse, nothing will prevent us from doing so if we don’t learn the most important lessons from this time, which is that none of us should be viewed as disposable. None of us should be treated as throwaway people, rounded up, locked up and then branded criminals and felons and ushered into a permanent second class status. That’s the lesson we have to learn from this time, and it’s not about saving money. It’s about saving lives, saving our own sense of humanity.

STARKS: If you got people in prison, they need to be loved, too, because if they cannot see the love of Christ, in spite of their circumstances, then they’ll never come to accept the fact that Christ cares about them at all. How can he care about me when no one from the church is in my life, no one from the church steps forward to give me an embrace?

JUDGE GRIFFEN: Talking about congregational involvement requires getting congregations to be about social change, and we in the American religious community have been very, very content to sing our way to heaven, but we have forgotten that in the Lord’s Prayer the word is "thy will be done on earth as it is in heaven."

POTTER: Without more support from faith-based or community groups, many of these prisoners face a tough road. Within three years, national statistics say, more than a third of them will be back behind bars.

More than forty years after the civil rights movement that ended legal segregation, African-American men are six times more likely than whites to be imprisoned, especially for drug offenses, in what has been called a “human rights nightmare.” “Many of the old forms of discrimination that we supposedly left behind in the Jim Crow era are suddenly legal again once you’ve been branded a felon,” says Michelle Alexander, author of “The New Jim Crow.”