BOB ABERNETHY (Host): We take a look now at the week’s top religion news and religion’s role in the general news with Kim Lawton, managing editor of this program and David Gibson, national reporter for Religion News Service who joins us from New York. David hello. Evangelical Christians in New Hampshire made up just over 20 percent of the Republicans voting there. In South Carolina, coming up, they probably will be more like 60 percent. What difference do you expect that to make?

DAVID GIBSON (National Reporter, Religion News Service): Bob, I think it’s going to make a critical difference because South Carolina is really shaping up as a make or break last stand for social conservatives. They just cannot get on board with Mitt Romney for a variety of reasons. But social conservatives, these Evangelicals, Fundamentalists also can’t decide among themselves what candidate they want to back whether it’s going to be Rick Santorum one day, or Newt Gingrich. Rick Perry just doesn’t seem to be generating anything whatsoever. But if they can’t decide and decide by Jan. 21 when the South Carolina primary happens, then they could effectively deliver the nomination to Mitt Romney. And then they’ll have to decide whether in the general election, you know, if Mitt Romney is not Mr. Right, if it’s good enough that he’s Mr. Right Now.

ABERNETHY: Kim, a lot of Evangelicals say they’re very uneasy, uncomfortable with Mormonism, with a Mormon candidate. Why is that? 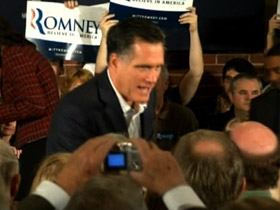 KIM LAWTON (Managing Editor, Religion & Ethics NewsWeekly): Well, and we should point out that there are a variety of reasons why a lot of Evangelicals haven’t backed Mitt Romney. His faith is one. A lot of them say they don’t trust him on some of their core issues like abortion. He changed his position. Or they don’t like where he stood on health care some time back. But there is the issue of his Mormon faith. Many Evangelicals don’t consider Mormons real Christians. Now that’s very offensive to members of the LDS Church who say, “We believe in Jesus is the son of God, you know, we believe Jesus is the savior, so yeah we’re real Christians.” But for some Evangelicals, the fact that Mormons don’t believe in the Trinity, they believe that God and Jesus were separate, physical beings, that’s a real difference with traditional Christianity. Mormons believe that God continued revelation in the Book of Mormon. Evangelicals and other Christians, not just Evangelicals, Catholics, mainline Protestants say this is outside the stream of traditional Christianity. So for some Evangelicals that means, “We don’t necessarily really want our president representing that.” Some Evangelicals have said, “That would legitimize a faith which we don’t agree with.”

ABERNETHY: David, is there an anti-Mormon strain within Catholicism?

GIBSON: No there really isn’t, Bob. It’s not showing up in the numbers. Mitt Romney is doing very well with the Catholic vote so far in the primaries that we have so far and he’s still polling well nationally with Catholics who just tend to be a little more moderate, I think, in their views. For them, Mitt Romney is completely acceptable. Perhaps Catholics have a kind of communal memory of the bias that they faced for so long in American culture and they don’t want to inflict that on Mormons as well. And I think that’s an irony that Kim was picking up on, that you see Evangelical bias against Mormons in the culture and perhaps in this election. Yet you see those same Evangelicals flocking to Catholic candidates like Rick Santorum or Newt Gingrich, who’s a convert to Catholicism. 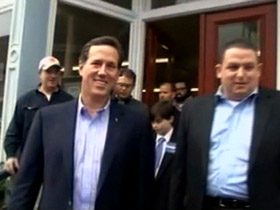 ABERNETHY: The big news for a whole lot of people in the religious communities this week was that Supreme Court decision saying that religious organizations can hire who they want to without regard to the anti-discrimination laws. Kim, pick up on that.

LAWTON: Well, I think for a lot of religious groups a key part of that was without government interference, that the government can’t come in and second guess the decisions that they make, especially when it comes to the people who are their leaders, the people who transmit their faith or lead their worship or do religious teaching.

ABERNETHY: People who are ministers.

LAWTON: Well, that’s the term although that’s the big question, who is a minister? And the court left a little open wiggle room in that one. They didn’t give a definition, “This person is a minister.” And that’s the concern of some civil rights groups that this will be interpreted broadly so that the janitor does ministry therefore he or she is a minister. But religious groups were watching this very closely because they were very concerned about creeping government power and if the government can come in a say “Well you shouldn’t have fired that minister,” then that would, they felt that interfere with their ministry.

ABERNETHY: David do you want to follow on that?

GIBSON: Yeah because I think it’s a very important decision, a unanimous decision, a resounding rejection of the Obama administration’s argument to limit this so-called ministerial exception. And a lot of conservatives in particular are hoping this signals that their signature issue, one of them – religious freedom, will prevail throughout the coming campaign. They’re concerned that the Obama administration is trying to curtail religious freedom, that its promotion of gay rights, for example, will impinge on the conscience and the rights of religious believers who are opposed to same-sex marriage. Same goes with these Health and Human Services regulations that are pending that would mandate all insurance plans to cover contraception. That’s a real problem for Catholic and Evangelical institutions and groups in particular. And they’re hoping that this signals that the administration is going to have to back off on some of those plans and policies.

ABERNETHY: So quickly Kim, just to sum it up. Religious groups are more free now than they were before to hire and fire people according to what they believe?

LAWTON: Well, they say that they’re free under the First Amendment as they always were. They were worried about the government coming in and changing that in some way. And I think David’s right that this has been an issue for a lot of religious groups as the culture becomes more diverse and there are different points of view, how can these religious groups do their faith, exercise their beliefs in a culture that may, you know, largely differ with them? And can they hold those religious beliefs on some very controversial issues like homosexuality or, you know the role of women and how can they do that in this context and so I think they were very pleased.