KIM LAWTON, correspondent: Before cancer, Joni Eareckson Tada lived an extremely busy life. One of the longest surviving quadriplegics on record, she led an international Christian ministry for people with disabilities. She was also a popular speaker, bestselling author, and acclaimed artist.

JONI EARECKSON TADA: In my situation, being a quadriplegic, I never had time to think about cancer, it always happened to other women. It was not in my wheelhouse. I mean, I had other issues to deal with.

LAWTON: Those “other issues” included more than 40 years in a wheelchair. An athletic teenager, Tada broke her neck in a diving accident when she was 17. Her spinal chord was severed, and she became paralyzed from the shoulders down. She has limited arm motion, but can’t use her hands or her legs. In addition to her quadriplegia, she suffers from chronic pain. It had been nine years since her last mammogram when in 2010, one of the women who helps get Tada up in the mornings noticed a mass in her right breast. Tada and Ken, her husband of thirty years, went to have it checked out and got the devastating diagnosis: A malignant tumor. Stage three breast cancer. 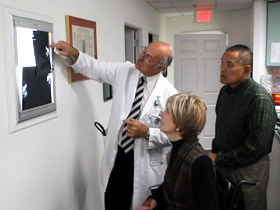 EARECKSON TADA: Any woman who is scratching her head wondering if she’s got enough time to make a mammogram appointment. Well, I’ll tell her: Do it.

LAWTON: I last interviewed Tada after the diagnosis, before she had begun treatment. She spoke of the uncertainty ahead.

LAWTON: Two years later, Tada says it is her evangelical faith that has given her the strength to fight.

EARECKSON TADA: I decided to not let cancer overwhelm me, I decided to overwhelm cancer with a shoring up of an attitude that would trust God in the midst of this and not doubt Him.

LAWTON: Tada invited television cameras to follow along. First came surgery, a mastectomy. She wondered how she would deal with losing a breast. 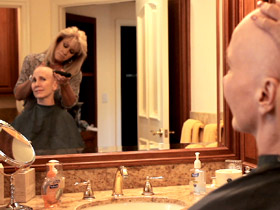 EARECKSON TADA: As a spinal cord injured quadriplegic, my body image is already, not the best. But, then to slice off a significant part of my femininity, was just hard to wrap my head around at first.

LAWTON: When the bandages finally came off, she says it wasn’t as bad as she had feared.

EARECKSON TADA: That first day when I wheeled into my bathroom to look in the mirror, I kind of was looking down, but not looking at the mirror, and wondering how am I going to handle this? Is it gonna overwhelm me? What’s it gonna be like, and I look up and oh, well this isn’t too bad. I can handle this, I can do this.

LAWTON: More daunting was chemotherapy. The doctors were especially concerned about the possible impact because of Tada’s quadriplegia. She already has brittle bones and diminished lung capacity. Losing her hair turned out to be one of the easier side effects.

EARECKSON TADA: I would wake up at night with hair in my mouth. There’d be hair on my pillow, and I said that’s it, this is all coming off. And so, my girlfriend took her shaver, and there I was, bald as a bat. We made light of it. We tried to find the humor in it. Besides, I knew it would grow back. So it was a minimal loss, it was a loss that I could absorb. 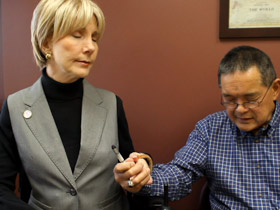 LAWTON: But the chemo took a severe toll on her body. She says it was in those dark moments that she saw the power of her faith.

EARECKSON TADA: I remember one time my husband was driving me home from chemotherapy and I was particularly nauseous, and we started talking about how our sufferings, this cancer, is like a little splash-over of hell, that kind of like wakes you up out of your spiritual slumber like, "Whoa!" And so, then we started thinking, well than what are splash-overs of heaven? Are they those days when everything is easy and breezy and bright, and there are no problems? He looked at me in the rearview mirror and said, “No, I think splash-overs of heaven are finding God, or finding Jesus in your splash-over of hell.”

LAWTON: Tada says she doesn’t waste time asking questions like why cancer had to happen of top of everything else that she deals with.

EARECKSON TADA: As I have learned to do over four and a half decades in this wheelchair, put it behind you. It’s in the past. Start where you are. This is the new base line, and get on with living. 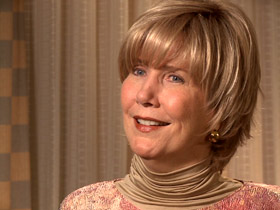 LAWTON: She says prayers, Scriptures and songs help her to do that. During chemo, one song was particularly meaningful.

LAWTON: Two years down the road, Tada says she is feeling a strength and stamina that has surprised her doctors. Her ministry now includes raising awareness about breast cancer, and supporting women who are fighting it. She has started to resume some of her previous schedule, including some travel and speaking engagements.

EARECKSON TADA: (Speaking to audience) If people put me on this pedestal, I don’t think they’re listening to what I’m saying. Because I’m just, I’m just one person on the same level playing field, helping other beggars to find the bread of meaning and purpose in their suffering. 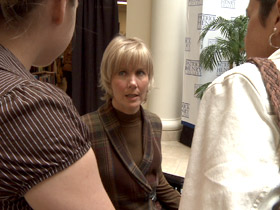 LAWTON: Tada says her relationship with Ken is stronger than ever.

EARECKSON TADA: It was his arm of support around me that gave me the courage to step out into that demilitarized zone of nowhere, not knowing what is going to happen and march through that marsh with me.

LAWTON: They made the difficult decision not to follow the chemo with radiation treatments because they feared the physical damage to Tada’s frail body would be too much. But this heightens the risk that cancer cells are still lingering. The doctors have left the chemo port in her chest just in case.

EARECKSON TADA: It’s a constant reminder that I’m not cancer free. I’ve got a long way to go before I can be declared cancer free.

LAWTON: Amid the uncertainty, Tada says she makes a conscious effort to corral her thoughts so that fear, anger and depression don’t take hold.

EARECKSON TADA: I just make my emotions obey me. I’m not going to be led by them, I will not allow them to rule my life. And, I think that is a secret to contentment, and it’s a secret to learning how to live in the present and move forward into the future with a good attitude.

LAWTON: The Tadas are currently working on a book about their life together, including this battle with breast cancer. I’m Kim Lawton reporting.

When we interviewed Joni Eareckson Tada in 2010, the popular evangelical author and speaker had just been diagnosed with breast cancer. Now, two years later, we speak with Tada, a quadriplegic, about her battle with the disease and how it has affected her marriage and her faith.