LUCKY SEVERSON, correspondent: This is the largest institution for the mentally ill in the state of Illinois and the second largest in the nation. It’s the Cook County Jail in Chicago. On any given day the complex holds about 10,000 inmates and on average one in four is suffering some kind of mental illness. Cook County Sheriff Tom Dart.

SEVERSON: They’re going to jail, hundreds of thousands of them. It’s happening all across the country. Pat Nolan is Vice President of the non-profit Christian ministry called Prison Fellowship. 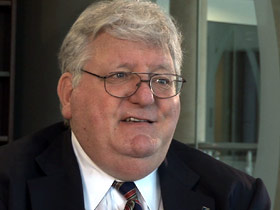 PAT NOLAN: The sheriffs are the good guys in this. They don’t want these people in jail. It’s just they’ve become the last resort. We‘ve closed down every other option.

ART WALLENSTEIN: Mental illness has become a major component of the correctional system in this country. And that was never intended and it’s bad public policy.

PAT NOLAN: Beginning in the 70s, there was a move to empty out the state hospitals because they’d become terrible places and they closed them down.

PAT NOLAN: Those weren't bad people, they weren’t criminals, they were sick and they needed help. The sheriff’s began complaining, saying they don’t belong in jail, please, do something about this.

SEVERSON: (to Omari Lewis) How many times do you think you've been incarcerated? 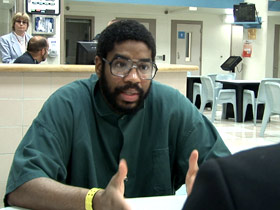 INMATE OMARI LEWIS: I know within the last ten years alone, if I totaled all my time up, I’ve been locked up half of the ten years.

SEVERSON: Omari Lewis is fortunate that he got thrown into the Montgomery County Jail, one of the more progressive. There’s a special pod here just for the mentally ill and a staff of trained therapists like Laurie Mombay who works with inmates like Omari.

LAURIE MOMBAY: When he came in he was quite unstable, psychotic and not medicated.

OMARI LEWIS: I have assaults on police officers, I have quite a few of those.

SEVERSON: Off your medications?

SEVERSON: Always off your medications?

PAT NOLAN: If they had the regular care of a doctor and treatment with the right medications, they can live wholesome, fulfilling lives. But if they get off those those medications, then they get into trouble, they end up on the street. 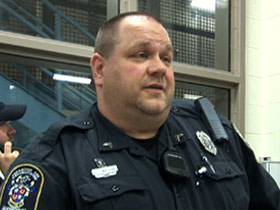 CORPORAL CHRISTOPHER WALTERS: I’ve seen improvements from where they've come in really bad shape and where they get back on their medications, move out of here, go in the general population, get a job, do their time and get out of jail.

SEVERSON: His is not an easy job. Not long ago he had knee surgery after an inmate kicked him.

CORPORAL CHRISTOPHER WALTERS: He was saying that he was receiving radio frequencies through his brain from Bill Clinton saying to create a disturbance so he could escape.

SHERIFF TOM DART: This doesn’t make sense on multiple levels. Start with obviously the moral, ethical level, it doesn’t make any sense to house people who are mentally ill in jails and prisons, OK? But leap past that, and say OK, from a fiscal standpoint, it makes no sense.

SEVERSON: Incarceration is an expensive proposition, and Sheriff Dart says locking up the mentally ill is even more costly. There’s the medication, the special training for staff, and extra corrections officers to deal with inmates' psychotic episodes. 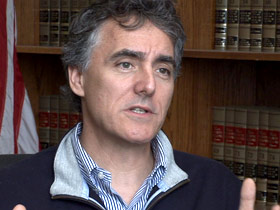 SHERIFF TOM DART: You take what is our average cost here which is about 143 dollars a day. It would defy reason and logic that it isn’t at least double, we think it’s more in the nature of triple the cost.

SEVERSON: One part of that cost, according to studies, is that mentally ill inmates stay in jail 5 times longer than other inmates and are 80% more likely to commit another crime when they get out.

SHERIFF TOM DART: About two months ago we had a person that we walked out of the jail. We tried to get hold of family members to come get him. Couldn’t get anybody to get him. He then wandered down the street, took all his clothes off and then picked a large ash tray and threw it through a plate glass window at the courthouse and wandered through the broken glass, covered in blood until we got there to grab him again and bring him back into custody.

PAT NOLAN: And the reason that the mentally ill take the drugs is it’s a way of self-medicating, to try to get past all the pain or the voices in their head, you know, whatever the demons that are inside them.

SEVERSON: Sheriff Dart has now put in place measures to help identify the mentally ill when they are first arrested, to treat them in jail and monitor them when they’re released, but that can only go so far, as he is the first to say. There is a program that has shown remarkable success in keeping the mentally ill out of jail called Pathways to Housing. Christy Respress is the Executive Director of Pathways in Washington, D.C. 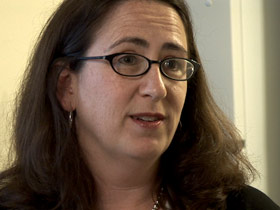 CHRISTY RESPRESS: So our housing and our support services combined cost less than it does to keep someone in jail or the hospital or the ER, or even the shelter.

SEVERSON: Since 2003 Pathways in Washington, D.C., which receives government and private funding, has placed over 500 mentally ill people in apartments. Most have criminal records, like Ellory Lampkin.

ELLORY LAMPKIN: Stealing, fraud. I’ve done a lot of things in my past and been arrested a lot of times.

SEVERSON: Pathways found Ellory on the street, asked him what he needed to stay out of trouble and, like most homeless, he said housing. Many programs offer housing, but only after the individual cleans up his or her act. Pathways offers housing first.

CHRISTY RESPRESS: And then we move the person directly, literally from the street into the apartment and all through that time there’s a team of support working with the person comprised of a psychiatrist, social workers, nurse, addiction specialists.

SEVERSON: It’s not easy moving from life behind bars and on the street to a life with responsibility. 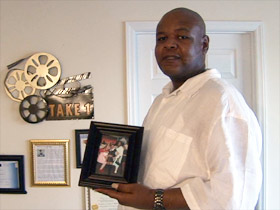 SEVERSON: Ellory has been off drugs and on medication now for 7 years.

ELLORY LAMPKIN: I’m going to say my attitude has changed a lot, because my bi-polar disorder had me as far as where my anger would go off on you at anytime, you know, you and I sitting here and having this conversation, and for some reason I would just go off on you, you know. But I don’t see that today.

SEVERSON: So far, 85% of Pathways clients, like Ellory, have stayed in the program and out of jail. In Pat Nolan’s view the way we treat the mentally ill is not only an ethical issue, it is a fundamental Christian value.

PAT NOLAN: You know, Jesus said I was naked and you clothed me, I was hungry and you fed me, I was thirsty and you gave me a drink, I was in prison and you visited me. These are our brothers and sisters. We do have an obligation to them.

SEVERSON: There is now legislation in Congress with bi-partisan support that would provide funding to states, counties and cities to expand mental health courts, crisis intervention, training, housing, and care as an alternative to jail for America’s mentally ill.

It doesn’t make moral, ethical, or fiscal sense, according to Cook County sheriff Tom Dart, to house people who are mentally ill in jails and prisons.