TIM O’BRIEN, correspondent: The case was brought by Abigail Fisher, who claims she was denied admission to the University of Texas at Austin because she is white.

Abigail Fisher (Plaintiff, October 10, 2012): “I hope the Court rules that a student’s race and ethnicity should not be considered when applying to the University of Texas.”

O’BRIEN: But the University of Texas, like most major American universities, does consider race and ethnicity in order to promote diversity in the student body. The university’s vice president for diversity and community engagement says so many factors are considered that the decision of whom to admit never turns on race alone. 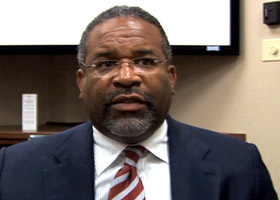 DR. GREGORY J. VINCENT (University of Texas Vice President for Diversity and Community Engagement): Diversity, and let’s be more pointed, racial diversity is used as one factor among many, so much so that it’s very difficult to pinpoint, ‘Oh, that student would have gotten in if they were white, or if that student were black.’ What we know is that there are African-American students who are denied admission with higher credentials than white students.

O’BRIEN: Lawyers for the Obama administration, in defense of affirmative action, pressed that claim to a skeptical Supreme Court. Here are some excerpts:

Justice Antonin Scalia: “The two applicants are entirely the same in all other respects.”

Justice Scalia: “And if the ability to give a racial preference means anything at all, it certainly has to mean that the minority student gets in and the other one doesn’t.”

Solicitor General Verelli: “I disagree, Justice Scalia. What the—Texas, I think, has made clear that not everyone in an underrepresented group gets a preference, gets a plus factor.” 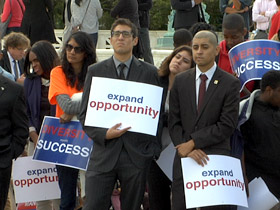 Justice Scalia: “It’s not a matter of ‘not everyone.’ It’s a matter of two who are identical in all other respects. What does the racial preference mean if it doesn’t mean in that situation that the minority applicant wins and the other one loses?”

O’BRIEN: Lawyers for the university were unable to state how much diversity is enough, or just when considering race may no longer be necessary. The only thing that has changed since the Supreme Court allowed race to be considered in university admissions policies 10 years ago is the composition of the Court. Justice Sandra Day O’Connor, the author of the 2003 decision, is gone, replaced by Justice Sam Alito, who has been hostile to affirmation action. In 2003, O’Connor was the fifth and deciding vote in favor of affirmative action. Alito could now well be the fifth and deciding vote against it. And if he is?

WILLIAM POWERS (President, University of Texas): The consequences for our university and for higher education [are] that we would not be giving the kind of education to all of our students in preparing them to work in a diverse and global world. It would be a setback for our students and our society.

O’BRIEN: Don't expect any ringing endorsement from this Court of affirmative action, if it survives at all. It's widely believed the Court's decision will be written by Justice Anthony Kennedy, possibly Antonin Scalia. Neither has ever voted to uphold affirmative action.

Racial diversity is only “one factor among many” in admissions decisions, according to the University of Texas vice president for diversity. But if the Supreme Court decides to abandon racial preferences, what will become of the pursuit of racial justice in education?