TOBI KAHN: I love it looking like a sky. I like the way it moves in and out. This is a little darker. That's a little lighter.

FAW: In his Long Island City, New York studio, cluttered with a forest of wooden blocks, power tools, paints and brushes, Tobi Kahn creates paintings, and sculptures, furniture and large installations. He came to prominence when in 1985 his work was selected for a group show at the Guggenheim Museum. But even though it is a small part of his work, Kahn is also known for his spiritual art and what he calls his sacred objects like this ceremonial box.

KAHN: You open it and you let all your negative thoughts disappear.

FAW: Tobi Kahn, the child of Holocaust survivors and an observant Orthodox Jew, creates Jewish art like this adornment for a Torah and this Omer counter whose blocks mark the 49 day period between Passover to Shavuot. 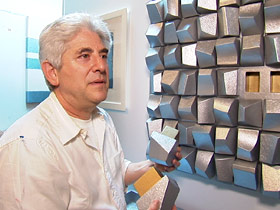 KAHN: I believe that your soul is gold. I believe everybody’s inside is pure or I hope it is.

FAW: The HealthCare Chaplaincy, an organization that provides spiritual counseling and support for people who are ill, is putting up a new building in New York. Kahn is doing the art work. This Omer counter will hang on the wall of the chaplaincy. After hours and hours of sanding and more layering of paint the installation will be transformed to a much lighter tone.

REV. WALTER SMITH (HealthCare Chaplaincy): I think this concept is wonderful. It incorporates so many elements of our various religious traditions and yet it has an art that transcends all of that as well.

FAW: That is why the president of the chaplaincy, the Reverend Walter Smith, says he chose Tobi Kahn as their artist because Kahn's work takes people to another place. 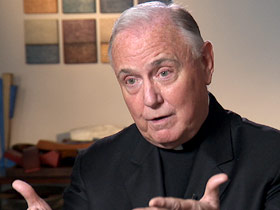 REV. SMITH: You have to believe that God moves through the artist in the way that God moves through a writer or poet or whatever. What I think his art does for those who view it; that people come to it at a place in their journey, and it takes them to where they need to go in that process of discovery. It is a transcendent experience. It takes you from here to wherever.

FAW: Kahn, who describes himself as a "spiritual" rather than a "religious" artist, says "beauty is inextricably linked to holiness."

KAHN: I believe art can take you on a journey and I like being the guide. You know, that’s really something that’s important to me. There’s a saying that, you know, everyone is tzelem elokim. We are created in the likeness of God. I believe in that. When I see something beautiful, something happens to me and I would call that holiness, and I want my work to do that.

FAW: He started painting what is called end of life art 8 years ago when his mother was dying of pancreatic cancer. She had loved flowers but as she weakened she could no longer stand their smell.

KAHN: I brought in one drawing that I had that was a flower painting. She loved that and then I subsequently brought more and more images in of flowers and she said she loved looking around the room and seeing life. It really influenced me in a very deep way and then after she died I decided this is something that I could do in her memory.

FAW: Kahn's flower paintings hang in the hallways of the Zicklin Hospice in Riverdale, New York, his water and sky paintings in the patient's rooms. Sally Kaplan is with the United Jewish Appeal. 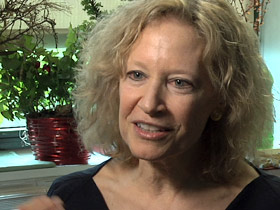 SALLY KAPLAN (United Jewish Appeal - Federation of New York): You know, nature and artwork and the whole environment have a positive impact on someone who’s ill or at end of life. When you see scenes from nature there’s almost a oneness that comes about, that somehow that this is a circle that’s going to be completed. And so I think it helps, with that level of acceptance and that understanding that this is a natural process of life.

FAW: That simple gift to his mother has evolved into a demand for his end of life art. Like all his work it is a labor-intensive process: Kahn uses layers and layers of gesso, and modeling paste and paint.

(to Kahn): Can you right now tell me how many more layers? 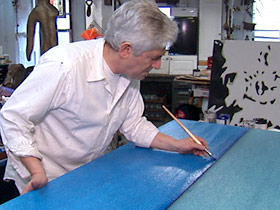 FAW: Because after 30 years you just know?

KAHN: You know, but there's always a little surprise. I'll give you an example. Sometimes I mess it up and go too far and then I have to start ten layers again.

FAW: To insure a smooth finish, there are also layers of glaze. How long does it take him?

FAW: For the 61 year old Kahn the objects he creates are meant to "celebrate divinity." All this, he says, comes from the Hebrew word "avodah," where work is combined with worship.

SMITH: The painter, the icon painter, prays everyday over those pigments, prays over the brushes. You’re called to do something and not every painter sees this. And that’s why painters that do this kind of work see their life in their mission. 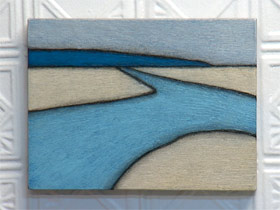 FAW: Kahn's work doesn't preach — he isn't trying to impose his beliefs. And if someone who sees his work comes away with an impression entirely different than what Tobi Kahn had in mind, that he says is perfectly alright.

KAHN: I want the viewer to bring his or her own experiences to the conversation.

FAW: Kahn uses the same approach not just in single objects but for large installations like this 9/11 memorial, the paintings in this Milwaukee synagogue, his Holocaust memorials and the chapel at the Zicklin hospice. Here he created the furniture, designed the seating area, and chose the textures and colors of the whole installation. For people approaching the end of life his work is designed to bring comfort and peace.

SALLY KAPLAN: Tobi I think uniquely has a sense of what, of how to put what is in his soul. There’s a Hebrew word “nishima,” to use that soul and bring it forth and put it in a visible form of a painting or a sculpture.

KAPLAN: You don’t normally think of healing at end of life because we think of healing as physical healing. But in fact healing can happen at the end of life and it’s very profound, it’s very deep. And it’s coming to terms, maybe with your family members and it’s developing a sense of peace about yourself and I think Tobi’s art is all about peace. And that journey to finding that place of peace, and that’s very, very relevant to people at the end of life. That’s what all of us hope for, for our loved ones.

FAW: And that feeling of peace is exactly what Tobi Kahn is trying to achieve, back there in that cramped, chaotic studio where he puts in twelve to fourteen hour workdays.

KAHN: When you see something that touches you, you can enter the painting. That or the sculpture. I feel you enter the space, and that’s what I’m interested in. I want my work to be that aid, to take you on that journey.

FAW: To that sacred space?

KAHN: To that sacred space. To the place that brings one comfort.

FAW: Tobi Kahn's work, as one writer put it, is "anchored among earthly things," "but pointing endlessly upward."

“God moves through the artist,” says Rev. Walter Smith, president of the HeathCare Chaplaincy in New York City, and the paintings, sculpture, and installations that result are “avodah”—a single act of both work and worship.