KIM LAWTON, correspondent: At Camp Gurmat in Rockville, Maryland, Sikh-American kids from across the country have come to learn about their faith and their heritage. Rajwant Singh of the Sikh Council on Religion and Education is one of the organizers.

RAJWANT SINGH (Sikh Council of Religion & Education): The whole focus of the camp is to really prepare these youngsters to become so connected with the heritage and so much connected with the history, that they don’t feel any sense of inferiority when they go out in the world.

LAWTON: That can be a difficult message when Sikh-Americans in many areas continue to face discrimination and misunderstanding. Because of their turbans and beards, Sikh men are often mistaken as Muslims. Since 9/11, attacks against Sikhs have risen sharply, culminating on August 5, 2012, with the mass shooting of worshippers at prayer in Oak Creek, Wisconsin. 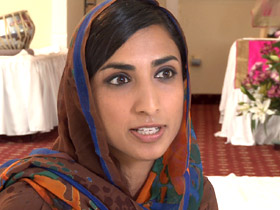 VALARIE KAUR (Groundswell, Auburn Seminary): I think that in the years after September 11th, the tragedy was just how normalized racism had become. So much so that when Oak Creek happened, it was devastating, it was demoralizing, but for many it wasn’t a shock.

LAWTON: The close-knit Sikh-American community, which numbers about half a million, felt the massacre deeply.

SINGH: We felt that all the bullets which were fired at the Sikhs and in the temple, they all hit our hearts.

LAWTON: But one year later, Sikhs across the board say good has come out of the tragedy.

KAUR: The legacy of Oak Creek is not one of bloodshed, not one of tragedy, but how a community rose to bring people together to heal and to organize for lasting social change.

LAWTON: Valarie Kaur is a filmmaker and director of the interfaith group Groundswell at Auburn Seminary. Her family came to America a hundred years ago. She says her first reaction to news of the shooting was despair. Then her phone started to ring. 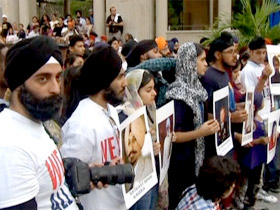 KAUR: People from all different colors and faiths were reaching out to me personally to tell me that they were with us, and this happened across the country. There was an outpouring of love and support that the Sikh community had never experienced before.

LAWTON: Numerous interfaith vigils and special events were held in solidarity with the community. It was a source of encouragement for Sikhs, but also an opportunity to educate people about their religion. Many Sikhs say the Oak Creek tragedy drew them closer to their faith, especially to the teaching that they must maintain a spirit of chardi kala, of optimism and hope. Valarie Kaur made a film about Oak Creek. She was there when they reopened the gurdwara or temple, after the shooting.

KAUR: When the FBI handed over the gurdwara to the community, when it was still a crime scene, when there was still blood in the carpets, when there were bullet holes in the walls, when the glass and the windows were shattered, and the community didn’t wait a moment before they turned on the prayers and to the sound of Sikh prayers began to clean up and rebuild the gurdwara before my eyes. I saw the spirit of chardi kala, this everlasting hope and optimism in the community that day. 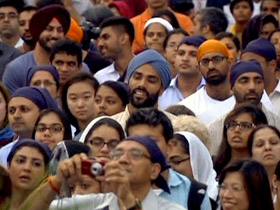 LAWTON: She says she was also profoundly moved by how the Oak Creek Sikhs responded to the killer.

KAUR: The whole community gathered together in order to pray, and they named each person who was killed in the tragedy, prayed for each of the victims, and then they named the gunman. And we as a community prayed for the soul of Wade Michael Page. And I think in that moment, I as a young Sikh American woman felt myself deeply connected to a faith tradition that responds to the most egregious atrocities with the spirit of love.

LAWTON: Leaders say since the shooting, there is new sense of identity in the community.

SINGH: A lot of young people and a lot of Sikhs have come out more stronger because they felt that this is the time our, my community needs me.

LAWTON: Young campers here say they take pride in being a Sikh. 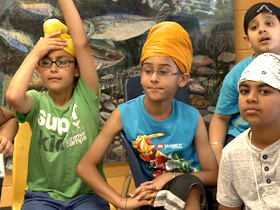 JAGJOT KAUR: I’m actually really proud of my religion so every time I see somebody I’ll tell them that I’m a Sikh and I’ll tell them what Sikhs are all about.

LAWTON: Others, like 15-year-old Harnoor Singh, try to combat bullying at school and counter the kids who call him “Osama.”

HARNOOR SINGH: If you don't tell them right there that “No, I'm actually not a Muslim, I'm a Sikh, this is what we believe in, this is who we are, and we are in no way affiliated with any terrorist group, that ignorance keeps spreading and eventually, you have every Sikh kid made fun of.

LAWTON: On the national level, the Sikh Coalition and other groups began a campaign to have the government specifically include Sikhs in US hate crime statistics.

KAUR: I remember standing with the police chief in Oak Creek as he hunched over the hate crime report form that he was obligated to fill out for the federal government and he showed me the report form and said, “There’s no way for me to check off the, the deaths that happened down the street. There’s no category for me to count the lives of Sikh Americans that were murdered. This must change.” 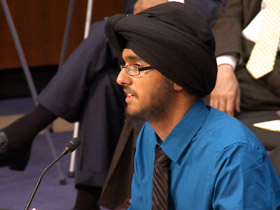 LAWTON: Forty-five days after the massacre, Harpreet Singh Saini, whose mother was among those killed, became the first Sikh ever to testify before the US Congress. He urged the government to track hate crimes against Sikhs, Hindus and other minorities.

HARPREET SINGH SAINI (in testimony): I want to combat hate, not just against Sikhs, but against all people. Senators, I know what happened at Oak Creek was not an isolated incident. I fear it may happen again if we don’t stand up and do something.

LAWTON: That law was finally passed in June. Now the Sikh community has a new campaign: urging the US military to change its 1980s policies banning service members from wearing turbans or uncut hair. Major Kamaljeet Singh Kalsi spent two years getting an exception to the rule. He served as a doctor in Afghanistan and earned a Bronze Star.

MAJ. KAMALJEET SINGH KALSI (in testimony): I can tell you with 100 percent assurance that none of my fellow soldiers or patients could care less that I was wearing a turban or had a beard while I was treating their wounds. All that matter was whether I was an asset to the mission. 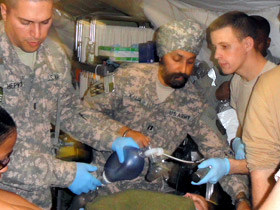 LAWTON: Sikhs have a long military tradition. Kalsi says for observant Sikhs, having a turban and unshorn hair are part of their religious uniform.

KALSI: Cutting one's hair is equivalent to adultery. So it is really a fundamental part of who we are. Just as you would not expect anybody to say cheat on his wife in order to get into the military, you cannot also expect somebody to cut their hair or lose their turban.

LAWTON: Kalsi fashioned his own turbans, which allowed him to meet military requirements for helmets. Two other Sikhs have also received accomodations to serve, but hundreds of others have not. Kalsi says changing the rules will have an impact beyond the military.

LAWTON: Service is an important part of the Sikh faith and to commemorate the one year anniversary of Oak Creek, many Sikhs have planned special days of service.

H. SINGH: You can come to us with any problem and we will help you. We will willingly help you and that's our duty as a Sikh. That is the duty for every Sikh. And in that way we shouldn't be judged by how we look but how we act as Sikhs.

LAWTON: Many Sikhs say those traditions and beliefs have helped their community move beyond Oak Creek with confidence and strength.

KAUR: Even though we still face profiling and bullying and racial slurs and continued hate violence, despite all of this, I still have deep hope because I look to the resilience and the courage embodied in our young people. And I know that this generation, like generations before it, will carry on the banner of chardi kala, the Sikh spirit and the American spirit for years to come.

When Sikhs began to restore their gurdwara in Oak Creek, “I saw the spirit of chardi kala, everlasting hope and optimism, in the community,” recalls activist Valarie Kaur.