KIM LAWTON, correspondent: On that August day, an estimated quarter of a million people gathered to support a vision for America outlined in Martin Luther King, Jr’s., soaring sermon-like rhetoric. Quoting from Scripture, King said he dreamed of the day when all God’s children — black, white, Jews, Gentiles, Protestants and Catholics — would be able to join hands in freedom. Half a century later, many believe that day has not yet fully arrived.

LAWTON: Reverend Vincent Harding is a scholar and activist who worked closely with King.

REV. VINCENT HARDING (Iliff School of Theology): King himself continued to move. He didn’t get down from podium in 1963 and then say, "Well, we’ve made the speech, we’ve made the march, thank you very much, we’ll see you in 50 years." The question for us now, on the 50th anniversary of the March on Washington, is what is the work that has to be done that hasn’t been done? 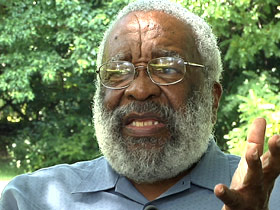 LAWTON: Harding and other civil rights leaders say the Trayvon Martin case, and the intense reactions to it, show some of the work that still needs to be done. Racial tensions flared after neighborhood watch volunteer George Zimmerman fatally shot 17-year-old Martin last year in a gated community in Sanford, Florida, outside Orlando. Martin was unarmed and wearing a hoodie. There were more protests after Zimmerman was acquitted of murder charges in July. Yet, while the case exposed ongoing racial divides, in some areas, it has also generated opportunities for new conversations about race.

That’s the situation in Sanford, where the tragedy took place. In the wake of the shooting, some local pastors, black and white, began meeting together to discuss the crisis. They formed a new group called Sanford Pastors Connecting, which promised to promote racial reconciliation. They believe it’s an outgrowth of King’s vision that all God’s children join hands. Derrick Gay, pastor of Dominion International Church, and Jeff Krall, pastor of the Family Worship Center Assemblies of God church are helping to lead the effort. 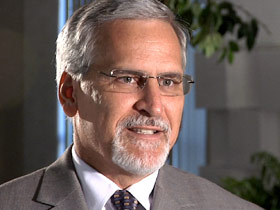 REV. JEFF KRALL (Family Worship Center, Sanford): This particular shooting, it happens everywhere in this country, but for some reason this one was highlighted, and I believe by the hand of the Lord, that, “Hey look, let’s, let’s make, this is going to be different.” We saw pastors come out of the woodwork who normally would never get together, and I’ve said this before, it’s in some respects, we were almost shamed into action.

LAWTON: Almost two months after the shooting, pastors from different races and denominations held a press conference and pledged unity. They said they would be praying for both the Martin and Zimmerman families.

REV. DERRICK GAY (Dominion International Church, Sanford): (at press conference) We don’t stand in a position where we’re going to take sides for black or white. We’re going to stand on the side of justice.

LAWTON: During the Zimmerman trial, members of the group were in the courtroom, praying for the proceedings. But they say their most important work was behind closed doors, in a series of meetings where they got to know one another. 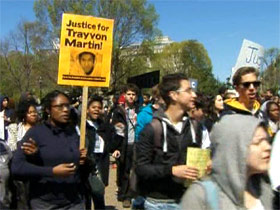 LAWTON: The pastors began talking openly with each other about their backgrounds, their resentments and their fears.

KRALL: Very hard conversations to have. You know, in the past I think there wasn’t enough grace for one another. Someone would express their issue or problem and the other side would go, “Oh, there you go again,” and people would take their ball and bat and go home. What was different about this, and it goes back to that spiritual environment that changed here, is when people were sharing very difficult things about hurt, people stayed in the room. 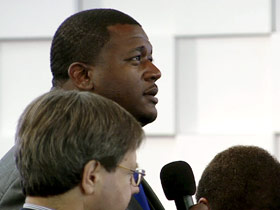 LAWTON: The pastors here say they are committed to the work because they believe it comes out of their Christian theology.

KRALL: God reconciled himself to a sinful man through his son Jesus so he’s given us the ministry of reconciliation and so any opportunity we can to build bridges and be peacemakers I think that’s part of, part of our mandate. Admittedly the Church has fallen short on this task.

HARDING: Churches have a great opportunity and a great responsibility to find the ways to bring us together, not just to worship, quote, together, but to live together. 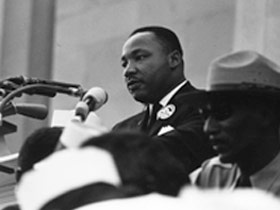 LAWTON: Vincent Harding believes Americans need to take a deeper look at one of the iconic lines from King’s March on Washington speech, when he said he dreamed that his children would one day live in a nation where they would not be judged by the color of their skin, but by the content of their character.

HARDING: How do you judge the content of a person’s character? Can you do that without coming in some way to know them, to open yourself to them in some intimate, compassionate, caring way? Because unless there is that, they are not going reveal their real character to you.

LAWTON: Without relationships, he says, injustice and violence will continue.

HARDING: If we’re going to let color and class keep us from being with each other, then we’ll never know the content of each other’s character and we will assume that somebody with a hoodie is a bad character and we have the right to chase him down.

LAWTON: The pastors in Sanford say they are trying to build relationships that will overcome misunderstanding. 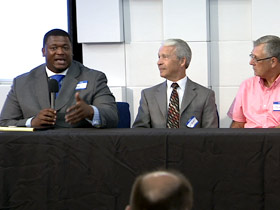 GAY: To see two men that don’t like each other, one black and one white or Hispanic or whoever they might be, to see them now link hands and come together, for me is the greatest miracle and is a testament to the work that Dr. King did.

LAWTON: Pastors here have been meeting one-on-one, doing pulpit exchanges, joint congregation projects and preaching about race and reconciliation. Now, they are starting to branch out beyond their own community. Charisma Media, which is based nearby, put together a short film about the work in Sanford to distribute to churches.

STEVE STRANG (Charisma Media): It’s the story of how Christians and the Church have responded to this terrible tragedy and to racism in our area.

LAWTON: And leaders here are helping to facilitate similar interracial initiatives for pastors in other parts of the country.

KRALL: It’s just not the dutiful thing of we should reconcile, which is an important thing. But on the other side of it there’s richness, there’s relationship, there’s... there’s like man, I’ve been living my life without you in my life? I feel like I’ve been robbed. There is a richness to this nation and, and, and to what we can have with one another that we’ve missed out on. We really have.

LAWTON: Harding says as the nation remembers the March on Washington, he hopes new relationships and new conversations will lead to new actions for justice.

LAWTON: He says it’s a movement that people of all races continue today. And he believes, as King believed, that faith communities must play a key role. I’m Kim Lawton in Sanford, Florida.

Recent events such as the shooting death of Trayvon Martin and the subsequent trial of George Zimmerman have highlighted racial divides that still exist in the U.S. 50 years after the historic March on Washington for Jobs and Freedom. In the wake of the shooting, local black and white pastors in Sanford, Florida are taking a hard look at what more they can do to promote dialogue, understanding, and racial reconciliation.