LUCKY SEVERSON, correspondent: These people are angry at the North Carolina legislature. This was the 13th week they’d gathered outside and inside the General Assembly for what organizers call Moral Monday protests. So far, 925 citizens have been arrested, even some in wheel chairs.

Protesters: Forward together, not one step back. 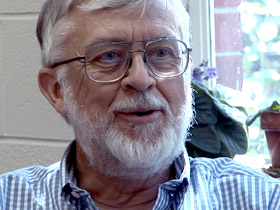 SEVERSON: At first the crowds were small, but each Monday they got bigger as the Republican legislature approved what the people here view as an extremely unjust budget and far-right social agenda. George Reed heads the North Carolina Council of Churches.

GEORGE REED (North Carolina Council of Churches): You might get your breath taken away for varying reasons, but I think just about everybody would agree it was a breathtaking session.

SEVERSON: The Republican governor said they were "outside agitators."

BISHOP MICHAEL CURRY: It is a fiction that outside agitators have had anything significant to do with this. The people who are protesting and present on Moral Monday are citizens of the state of North Carolina, with a few exceptions.

SEVERSON: The Reverend Michael Curry is the bishop of the Episcopal Diocese of North Carolina. 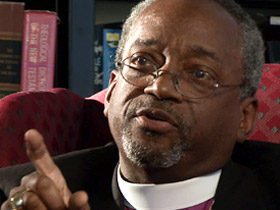 BISHOP CURRY: If you look at the state budget and you look at the weight of the tax reform, it is heavily weighted to the wealthy and, to be sure, to the corporations. And the working poor are the ones who are bearing the brunt of the burden.

TAMMY FITZGERALD: Immoral Monday is a term I have used and I do believe is true, because I think the issues that the crowds out there every Monday night are fighting for and protesting for are basically immoral positions.

SEVERSON: She thinks the protestors are a small minority, out of the mainstream, against a legislature that’s behaving prudently. 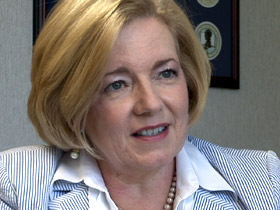 FITZGERALD: The question is whether you want the government to take care of people who have needs, or whether you want private citizens and the church to do that, and it’s a diabolical split in philosophy.

SEVERSON: Politically, North Carolina has been pretty evenly divided. Obama won here in his first presidential election. But in 2010 the Republicans, for the first time since Reconstruction, won both houses in the General Assembly. Then they redrew the district lines, making it easier to win even more conservative seats in 2012. Now in complete control of the General Assembly and the governor’s mansion, the Republicans have managed to push through a very conservative agenda.

FITZGERALD: The state under new leadership has taken the approach that it’s going to live on a balanced budget, and try and control government spending, and make government smaller so that people have more money to put in their wallets and more money to spend out in in the economy.

TYE HUNTER: We have to balance our budget every year; it’s a constitutional requirement. Our budget was balanced. They’ve cut taxes; all the benefit is for wealthy people, or all the real benefit. 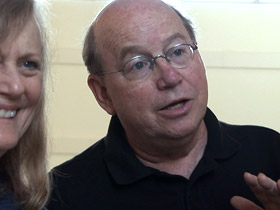 SEVERSON: Tye Hunter is with a group of protestors from the United Church of Christ in Chapel Hill, who have all been arrested at the Moral Monday protests.

HUNTER: They’ve put a cap on the taxes you have to pay when you buy a yacht, and yet they’re increasing taxes for other things that poor people have to pay every day, like mobile homes.

SEVERSON: Legislators cut education across the board but added money for private and parochial school vouchers. They effectively disqualified more than 70,000 from unemployment benefits; and even though it didn’t come out of the state budget, blocked Medicaid expansion that would have covered 500,000 North Carolinians.

BISHOP CURRY: Who’s on Medicaid? The poorest of the poor. And so we literally, in the state of North Carolina, are casting sick people out into the street, so to speak, and what’s going to happen is our emergency rooms are going to fill up, and it’s going to cost us more in the long run.

SEVERSON: The congregation at the United Church has become very involved in the protests. On this Sunday several members march to the front to be blessed for their next protest. This is Pastor Richard Edens. 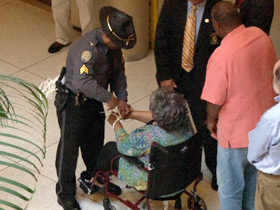 PASTOR RICHARD EDENS: There is great biblical precedent for people being arrested. You find it all over the New Testament. So it’s a great heritage to be a part of.

PASTOR JIMMIE HAWKINS: I was arrested on April 29th, with the first group that went in. There were 17 of us who were arrested.

SEVERSON: Pastor Jimmie Hawkins of the Covenant Presbyterian Church says his congregation has been very supportive of the protests.

PASTOR HAWKINS: We used to have tax-free weekend for parents who have children going back to school. This is a group of legislators who the minute they were elected saying they were going to cut your taxes, and they eliminated that, so ultimately they raised your taxes.

SEVERSON: But Pastor Patrick Wooden of the 3,000-member Upper Room Of God in Christ church thinks the legislators did a great job.

PASTOR PATRICK WOODEN: The way I view what the legislators are doing is that they’re providing or making an attempt to provide a business-friendly environment, which is good for everyone. 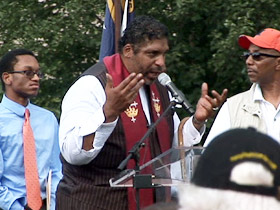 PASTOR WILLIAM BARBER: (speaking at rally) But if they thought a couple of votes were going to turn us around, then they have another thought coming.

SEVERSON: Moral Mondays was initiated by Pastor William Barber, the head of the North Carolina NAACP. Over the weeks, the number of clergy who endorse the movement has grown considerably. Leaders of the Lutheran, Presbyterian, Episcopal, Roman Catholic, United Methodist, and Jewish faiths signed a statement of support, saying many of the new laws adversely impact the poor, aging, and children.

PASTOR WOODEN: My major disagreement is when men of the cloth are leading a protest and part of what they’re protesting is the legislature's attempt to protect the rights of the unborn and to put a limit on the killing of the unborn.

SEVERSON: The legislature approved one of the most restrictive anti-abortion laws in the nation, and that pleases Pastor Wooden. 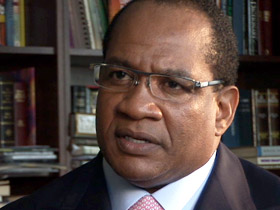 SEVERSON: The legislators also approved what may be the most restrictive voter law in the country. Kirstin Frescom is one of those who has been arrested.

KIRSTIN FRESCOM: The voter suppression is just so wrong to me, because we're in a democracy, and if anything we should be encouraging and supporting voting, and anything that stops that is just wrong in a democracy.

BISHOP CURRY: Now you can have guns in parks and in public places and in various...in bars. Again, people from across the spectrum, people in the center, what I call the sensible center, are beginning to say, "Wait a minute, this has gone too far."

PASTOR WOODEN: I think overall the General Assembly have done a great job, and I appreciate the work that they’re doing.

SEVERSON: But there are signs that the Moral Monday protests have been getting their message through to the general public.

PASTOR HAWKINS: A lot of people are now paying attention, and you see that the governor’s polls are going down, the polling for the state legislators is just in the bottom, and so I think people are starting to be more attentive, so I’m looking ahead to 2014 where we can have some new elections.

SEVERSON: The legislators have finished their business and gone home for the season, so the demonstrations are now moving to other North Carolina cities and so far drawing big crowds.

Religious leaders in North Carolina are being arrested in growing numbers to protest new laws they say adversely affect the poor, the aging, and children. “There is great biblical precedent for people being arrested,” says Rev. Richard Edens. “It’s a great heritage to be a part of.”