BOB FAW, correspondent: This is “coming out day” at Georgetown University in Washington, DC. At this Jesuit institution, three dozen students celebrate homosexual and lesbian lifestyles even though the Catholic Church considers them immoral. Thomas Lloyd is president of Georgetown’s Gay Pride.

THOMAS LLOYD (Student, Georgetown University): By recognizing pride, Georgetown has become more true to its Jesuit values. Commitments to social justice are some of the most important and historically grounded parts of Catholic doctrine.

FAW: But what is sanctioned at one Catholic university is anathema at another: Florida’s Ave Maria University.

JIM TOWEY (President, Ave Maria University): This is a university that’s founded on biblical truth, on scripture, and on the sacramental richness of the Catholic Church. 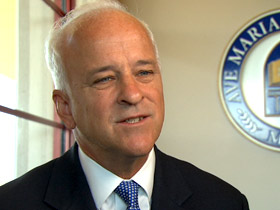 FAW: At Ave Maria, ninety percent of the one-thousand-member student body are Catholic. Professors pledge to uphold Catholic beliefs. There are worship sites in every dorm, and mass is held three times a day. Its president, Jim Towey, who worked for the Bush administration as director of its faith-based and community initiatives office, also served as legal advisor for the late Mother Teresa. Ave Maria is determined to stay a course from which its president says other Catholic institutions have strayed.

TOWEY: In an age where modernity has attacked the whole idea of objective truth and the whole relativism that you see that’s pervasive in our culture, I guess this university’s not going to be here to be popular; it’s not here to try to please everyone. It’s here to try to be true to itself and its own Catholic identity.

FAW: Georgetown University, renowned for its academic excellence, has a different view of its Catholic identity. All students, though only half of the 7,000 undergraduates are Catholic, are required to take two theology and two philosophy courses.

Mass at Georgetown: “Lord, you are the giver of all good gifts.” “Lord, have mercy.” 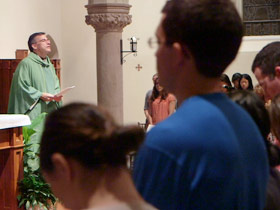 FAW: Though students are not required to go to mass, there are many to choose from, and Catholic priests live in each dorm acting as mentors and friends. But Georgetown, which boasts “the largest campus ministry in the world,” also fiercely champions unfettered dialogue.

REV. KEVIN O’BRIEN (Vice President for Mission and Ministry, Georgetown University): What we did 50 years ago to promote our identity does not suffice today because the world is different, and our students and faculty are different. To quote something Father Hesburgh from Notre Dame would often say, “The Catholic university is a place where the church does its thinking.” And if that is to be the case, then we have to permit this free exchange of ideas.

FAW: Georgetown insists that welcoming groups like Gay Pride, even hosting a gay and lesbian center on campus, is part of the Jesuit’s priestly mission.

O’BRIEN: The purpose of the center is not to undermine the church’s teaching. It is a center for education. We try to teach our students and faculty and our alumni about issues of sexuality, of sexual identity and gender. That’s an expression of our Jesuit tradition of cura personalis, caring for each person mind, body, and spirit, in their unique individuality. 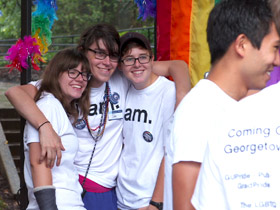 TOWEY: They become bastions of relativism where your truth is your truth, my truth is my truth, the Catholic teaching is just one path. That’s not our view, and I feel sorry for those universities. I think they’ve lost their moral bearings, and I think they’ve lost their Catholic identity when they water it down to the point where everything’s true.

FAW: Still, many Georgetown students argue that this Catholic university has found the right mix of scholarship and religious character.

KEVIN SULLIVAN (Student, Georgetown University): I think it’s reaching a great number of students, non-Catholic and Catholic, and helping them to develop, grow in their own faith and figure out really how they can bring their faith into public life.

FAW: On Georgetown’s campus there are, of course, dissenting voices which contend that this university has strayed. 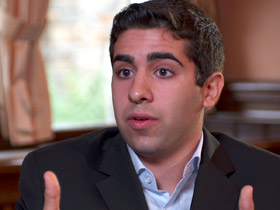 LOUIS CONA (Student, Georgetown University): Is it Catholic enough? I would say no. We have the Knights of Columbus, the Catholic Daughters, there’s all student-run organizations, but the university is not promoting this stuff. We have a mass, but are they teaching you about this stuff? Are they promoting this as an ideal, as a good?

FAW: And you would say no.

CONA: I would say they are a little passive on that.

ANDREW SCHILLING (Student, Georgetown University): It’s not so much that Georgetown can’t support homosexuals and treat them with respect and the dignity that they deserve, but it’s rather that the university remains silent about the church’s teaching and position with regard to homosexuality, with regard to human sexuality in general.

FAW: But gay pride activist Thomas Lloyd counters that his faith has been affirmed precisely because Georgetown is Catholic. 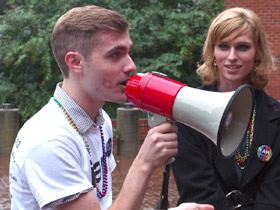 LLOYD: I wouldn’t even think about how to reconcile my queer identity with my Catholic faith identity if I hadn’t come to Georgetown. What does it mean to be gay and Catholic? Can those two go together? And my experience at Georgetown with Jesuits and with other people who are Catholic and identify as queer on campus show me that you can.

FAW: On the campus of Ave Maria, a debate on the role about groups opposed to Catholic teachings seems unlikely.

CHRIS AUDINO (Student, Ave Maria University): Take what you want, leave what you don’t: as Catholics we believe that’s not the way faith is meant to be lived.

FAW: Nor do students here feel they’ve been short-changed because they don’t have direct exposure to gay and pro-choice groups permitted on the Georgetown campus. 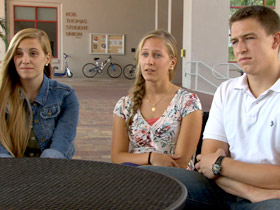 MIKE WATKINS (Student, Ave Maria University): The professors represent their views well, and they present the argument in such a way that is challenging for us as Catholics to engage the argument and try and prove it false.

TOWEY: If a group wanted to be pro-choice, pro-abortion Catholics we would not want to try to endow that group with legitimacy. That’s not in some way curtailing academic freedom. It’s recognizing that academic freedom has limits.

FAW: And many Ave Maria students agree their faith has been strengthened largely because the Catholic identity here is so pervasive. 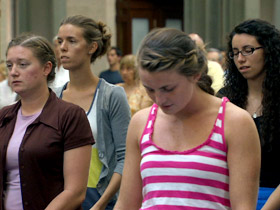 FAW: And fostering that, says Ave Maria’s president, is the true role of a Catholic university.

TOWEY: What’s needed now is a Catholicism rooted in scripture, sacramental in nature, that’s open to engagement with the world without losing its own identity.

FAW: It isn’t easy. Ave Maria to get more students recently slashed tuition. Georgetown policies have prompted harsh criticism and loss of financial support from some alumni; and if the debate now underway at many of the country’s nearly 270 Catholic colleges and universities seems a bit untidy, that’s precisely because it is.

FAW: Questions reverberating in the world at large and on Catholic campuses.

For Religion & Ethics NewsWeekly this is Bob Faw in Ave Maria, Florida.

What does it mean for a school to be Catholic? “This is a university that’s founded on biblical truth,” says Ave Maria University president Jim Towey. But according to Rev. Kevin O’Brien, vice president for ministry and mission at Georgetown University, “What we did 50 years ago to promote our identity does not suffice today.”