LUCKY SEVERSON, correspondent: Sunday morning in Moore Park, a historic square in Raleigh, North Carolina. Hugh Hollowell is a pastor in the Mennonite Church and founder of the Love Wins ministry, a congregation of homeless people he has been feeding on weekends for over six years. So he was stunned when he showed up one Sunday morning late this summer.

HUGH HOLLOWELL: We were greeted for the first time ever with numerous police cars. A police officer tells us: “You can’t be here, you can’t set up, you can’t share food.” I think he said “You can’t feed people." And I said, “Why not?” And he said, “You’re violating an ordinance.”

SEVERSON: The old, rarely used ordinance said the pastor could apply for a permit, but it would cost him $800 for each day he came offering food. 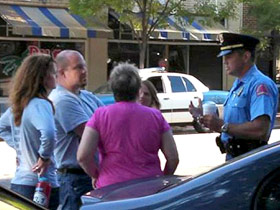 HOLLOWELL: I said, “We’ve been doing this for six-and-a-half years. Why are you just now doing this?” And he said, “Sir, I’m not here to debate you. I’m here to tell you if you persist you will be arrested.”

SEVERSON: And so about 100 people, some of whom had not eaten for 24 hours, left hungry. So why, after all these years, did the city of Raleigh suddenly crack down on feeding the homeless? It’s known that the downtown businesses’ alliance had complained about customers being discouraged from coming to their stores by both the feeding and the loitering. The homeless speak of another reason, like Steven. He’s homeless after holding a job for 19 years.

STEVEN: They're changing the whole area to be more upper-class. They’re trying to get the people out of here to put apartments and so forth in.

SEVERSON: There are hundreds of communities and cities throughout the country that are buffing up their downtowns and removing the homeless in the process. They say it’s not only good for business, it’s good for the homeless. Critics, many of them pastors, say it’s simply a matter of “out of sight, out of mind,” and that it’s morally wrong. 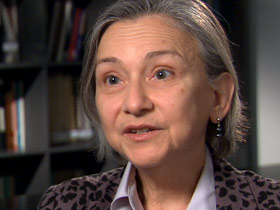 MARIA FOSCARINIS (National Law Center on Homelessness and Poverty): Many cities feel that in order to develop their cities, especially their downtown areas, they need to present a very what they consider attractive appearance, and that doesn’t include the sight of visible poverty.

SEVERSON: Maria Foscarinis is founder of the National Law Center on Homelessness and Poverty.

FOSCARINIS: In each of these cities there is some type of criminalizing ordinance, some kind of ordinance, that prohibited sleeping in public, sleeping in a particular public place, sleeping in parks, begging, activities that essentially you have to carry out in public if you’re homeless. So hundreds of cities, at a minimum, across the country are adopting this kind of law. Overall I would say that communities are, or cities are criminalizing homelessness faster than we can oppose these efforts.

SEVERSON: One of those cities is Columbia, South Carolina. The state capital has embarked on a crusade to revitalize downtown. The leader of that campaign is Councilman-at-Large Cameron Runyan. He says what galvanized the revitalization was a letter from the boss of one of downtown’s anchor stores. 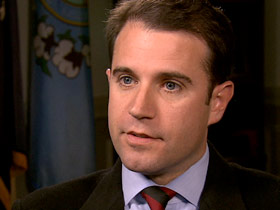 COUNCILMAN CAMERON RUNYAN: It said, “We cannot sustain our business model if you guys don’t address the problem of un-responded to poverty in the heart of the city. It’s killing our ability to engage in commerce.” So we have opened an emergency shelter here in the city, and we have made provision for all who are willing, who want to go, to have help at this emergency shelter.

SEVERSON: But the budget for Columbia’s only city-operated shelter is less than a half of what the city itself projects is needed, and there are only 250 beds. It’s estimated that on any given day Columbia has over 1600 homeless, and beyond that it’s generally recognized that shelters are far from appropriate or helpful for every homeless person.

RUNYAN: Nobody is forced to go to the shelter, but what they are forced to do is they’re forced to abide by the laws of this city.

SEVERSON: What if you’re sleeping out on the street?

RUNYAN: You’re going to get arrested. 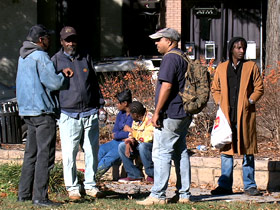 SEVERSON: And you’ll go to jail?

RUNYAN: You—It is not legal to sleep on the streets in the city of Columbia.

SEVERSON: Councilman Runyan believes he has a long-term answer to that question. It’s phase two of a master plan he proposes to fix the city’s homelessness once and for all.

RUNYAN: I’m very supportive of the concept of a “retreat.” Now let me tell you what, in my mind, what that is. That is a very large tract of land, 500 to 1000 acres, pristine, a place that you or I or anyone watching this would love to go to.

SEVERSON: The tract of land is 12 to 15 miles outside of Columbia. Runyan maintains this “retreat” would be similar in concept to where the wealthy who need help would go to a retreat in, say, Florida—far away from negative influences.

SEVERSON: The city has invited proposals to deal with its homeless problem. Councilman Runyan’s idea of building an out-of-town retreat is provoking strong opposition. 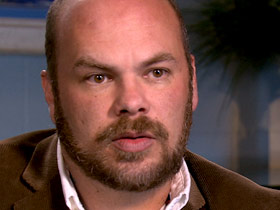 JOHN DAWKINS: There has to be—and there is—other answers to the question at hand. You know, housing for people can be done within the city itself, within the downtown area, at least within the bus system.

SEVERSON: John Dawkins is with a nonprofit that provides housing, some counseling, and training to about 250 homeless, over a third of whom are currently employed, also known as “underemployed.” He says the councilman’s plan will actually result in more homelessness.

DAWKINS: You’re ripping people out of their environment, you’re ripping them out of their safety zone, and you’re taking communities, and you’re pulling those apart, and any chance the person has of moving forward is gone. They’re going to go live on the river again, or in the wooded encampment areas.

SEVERSON: He says he’s active in the downtown community and doesn’t think the homeless should be allowed to loiter and disturb people but should be treated with dignity—people like Winnie Boiler up in Raleigh, a schoolteacher who lost her house after she lost her job, notwithstanding two masters degrees. 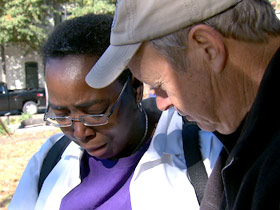 WINNIE BOILER: I don’t even want to tell nobody how much education I got, and yet I ended up like this. I even question myself, and I can’t question God. But I got Him, I need for Him to show me what to do, because I don’t know right now. I really don't know.

SEVERSON: And it’s not only the homeless who are wondering where to turn. It’s also the people who are trying to help them.

SEVERSON: Something that Pastor Hollowell felt was better did emerge, after he gained a lot of support for his protests over the police stopping him from feeding the homeless. It’s a city-owned building right across the street from Moore Park, where the homeless will soon have shelter and, it’s hoped, not be in the way of downtown revitalization.

For Religion & Ethics NewsWeekly, I’m Lucky Severson in the Carolinas.

As cities grapple with the problem of homelessness, some believe the solution is to move them to “retreats” outside the city. But critics say such proposals are cases of “out of sight, out of mind” that will actually result in more homelessness.

Food Banks and the Recession