UNIDENTIFIED WOMAN: Before we could ever have Thanksgivukkah, we needed to have the Maccabees starting that war...

LAWTON: ...from the second century BCE when the Jewish Maccabees fought against Greek Assyrian oppressors in Israel to the 17th Century when the Pilgrims landed just a few miles down the road. Here at the closest Jewish Day School to Plymouth Rock, Thanksgivukkah is huge.

LAWTON: Rabbi David Paskin, co-head of the school, wrote “The Ballad of Thanksgivukkah,” which the students performed in a YouTube video that went viral. The song imagines turkey stuffed with Hanukkah pancakes or latkes, and the Jewish Judah Maccabee serving potatoes to the Native American Squanto. But Paskin says underneath the lighthearted tone is something very meaningful. 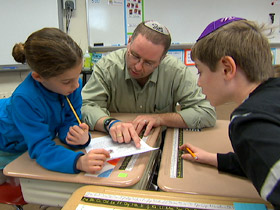 LAWTON: Because the Jewish calendar is based on a lunar cycle, from year to year, Hanukkah begins on different dates during late fall or early winter. Thanksgiving is always the fourth Thursday in November. This year, for the first time since the 1800s, the first full day of Hanukkah coincides with Thanksgiving Day. And according to some calculations, it won’t happen again for almost 80,000 years. The convergence has resonated deeply with Jews across the country. There are numerous websites offering holiday mash-up recipes for things like sweet potato latkes with cranberry sauce and roast turkey brined in Manischewitz wine. And of course, all the special merchandise, including tee shirts and turkey-shaped menorahs, known as “menurkeys”.

This is Plymouth, where tradition says the pilgrims first landed in 1620 and may well have celebrated the first Thanksgiving the following year. Because it’s close by, the Jewish community of greater Boston has been very enthusiastic about celebrating Thanksgivukkah. 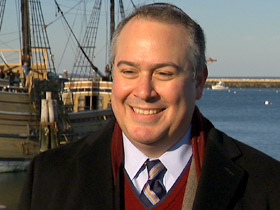 JEREMY BURTON (Jewish Community Relations Council of Greater Boston): This is a once in a lifetime celebration for our community.

BURTON (showing the proclamation): So now it’s not just a song, it’s also a state holiday.

LAWTON: Because Hanukkah usually falls in December, it is often tied to Christmas. But many Jews believe the themes may actually be a better fit with Thanksgiving. At the historic Vilna Shul in Boston’s Beacon Hill neighborhood, a group of young Jewish professionals called Havurah on the Hill sponsored a special Thanksgivukkah-themed Sabbath gathering.

KATIE VENETSKY (Havurah on the Hill): What’s really interesting about Thanksgivukkah is that it’s combining two holidays that really embrace being with your family and building community.

LAWTON: Guest speaker at the event was Malka Benjamin, an observant Jew who is an historical interpreter and plays a Pilgrim at the historic Plimoth Plantation. She sees strong ties between the Jewish experience and that of the Puritans, or separatists. 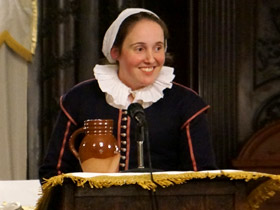 MALKA BENJAMIN (Plimoth Plantation): There’s definitely a persecution connection. You know, most of the Jewish holidays are ‘they tried to kill us, we survived so we celebrate.’ That definitely happens on Hanukkah, and the separatists are persecuted, really they’re prosecuted. They’re breaking the law in England. In the 17th century by law you must be a member of the Church of England. They break the law, which is why they flee to Holland and ultimately come here.

LAWTON: Rabbi Paskin brought Kehillah Schechter students on a field trip to Plimoth Plantation, where visitors can see what early colonial life was like. He hopes Thanksgivukkah can be an opportunity for Jews to learn more about the Puritans, who were also a religious minority.

UNIDENTIFIED BOY: What is your roof made of?

PASKIN: Of course the story of Hanukkah is a story of religious freedom. It’s a story of a people yearning to truly live as full Jews and yet also be fully integrated into a secular society. The story of Thanksgiving is of pilgrims yearning for their own religious freedom and trying to find their identity in a new world that they did not even know yet. 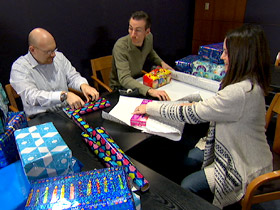 LAWTON: Many in the Jewish community are using Thanksgivukkah as a spring board to encourage special charitable efforts.

BURTON: This is an opportunity to also give back to the community, to recognize that there are some who don’t have food on their tables, to acknowledge that we are all immigrants here, or at least most of us are, and to celebrate what makes America great.

CHERYL CARNER (Jewish Big Brothers Big Sisters): Thanksgiving is about being grateful for what we have. And, as it relates to Hanukkah, I think that certainly it gives families the opportunity while they’re exchanging gifts amongst their families, to do something for children in need.

LAWTON: Stefanie Zelkind is director of the Jewish Teen Funders Network and has blogged about practical ways families can incorporate giving into Thanksgivukkah celebrations. 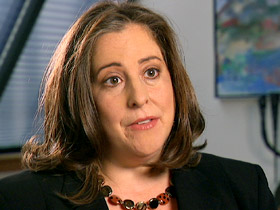 STEFANIE ZELKIND (Jewish Teen Funders Network): In Judaism we have the value of tzedakah which is a commandment, in fact, to give. It’s not just a nice thing to do but something we’re required to do. So to come together as a family, talk about what matters to us and what kind of change do we want to make in the world, and then go out and do it.

LAWTON: One idea is to put a tzedakah box in the middle of the dinner table instead of a centerpiece.

ZELKIND: And every guest is invited over the course of dinner to put something into the tzedakah box. It could be a quarter, it could be $100, it could be a check for even more. And over dessert we talk about where we would like that money to go and what kind of gift we would like to make together as a family. While Thanksgivukkah is a unique opportunity, I hope that the traditions we begin this year will last for the future.

LAWTON: Paskin says behind it all is the spiritual value of gratitude, something he says should be core to Jews and non-Jews alike. 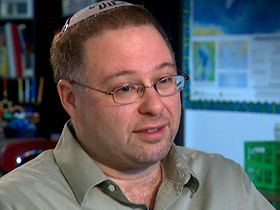 PASKIN: Abraham Joshua Heschel teaches us about radical amazement, that we should look at the world and be radically amazed at what we see, that, that we could be having this conversation, that the sun came up this morning. If we can look at the world and be amazed by what we see, and realize that every moment is a blessing, it’s an opportunity to be grateful, just imagine how enriched our lives would be.

LAWTON: Indeed, Paskin and other Jewish leaders say all Americans can benefit from reflecting on many of the values highlighted by Thanksgivukkah, values such as responding to religious intolerance.

PASKIN: For non-Jews and Jews is to look at the breadth of responses that we’ve had throughout time to the struggle for religious freedom, and what is that struggle going to look like for the next generation? How are we going to teach our children what it means to honor and to respect different cultures and different traditions?

BURTON: The story of the Mayflower and the story of the Pilgrims is about people coming to this country to build a community rooted in values for their children and to build a community rooted in their understanding of their history and frankly their reading of the Bible. Over the last centuries millions of people have come to Boston and have really appreciated that this is a place for building an American idea. And that idea, which started as one faith community, the Pilgrims, has really grown into an interfaith community.

LAWTON: And that, they say, is definitely something to celebrate.

For the first time since the 1800s, the first full day of Hanukkah coincides with Thanksgiving Day this year, and according to many in the Jewish community, the two holidays have much more in common than just a calendar date. They both celebrate gratitude, community, and religious tolerance. “The story of Hanukkah is a story of religious freedom. It’s a story of a people yearning to truly live as full Jews and yet also be fully integrated into a secular society. The story of Thanksgiving is of pilgrims yearning for their own religious freedom and trying to find their identity in a new world that they didn’t even know yet,” says Rabbi David Paskin.