DEBORAH POTTER, correspondent: For generations, it's been a rite of passage.

Dr. John Snyder with stethoscope: Can I listen to you?

POTTER: A visit to the pediatrician—and an injection or two.

POTTER: Rahm Kaiser Epstein is 15 months old. On this day, he's being vaccinated against measles, mumps, rubella, and chickenpox. He doesn't much like it. Neither does the four-month-old in the next room. Hayden's vaccines also covered multiple contagious diseases, including diphtheria and whooping cough.

SCOTT TAYLOE: I think it's all the standard, routine shots I think we need to protect us. We've all had the same shots as kids, so I don't see a reason why he wouldn't. 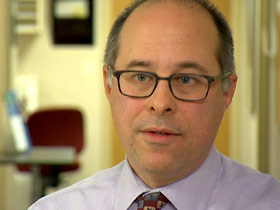 POTTER: At this pediatric practice in Amherst, Massachusetts, most children get all their vaccines on time. But Dr. John Snyder sees a growing number who insist on delaying vaccinations or flatly refuse them.

DR. JOHN SNYDER (Amherst Pediatrics): These are not bad parents. These are parents who do want to do the best thing, and unfortunately they are misinformed, and there’s an enormous amount of misinformation out there. You have parents who are certain that vaccines are the cause of maybe autism or autoimmune diseases or whatever else they may have heard, and they know because they’ve done their “research,” and they know the answers, and I’m just part of the problem.

POTTER: Before her son, Logan, was born, Jodie Castanza had already decided not to have him vaccinated, concerned about a possible link between some vaccines and autism or asthma.

JODIE CASTANZA (Childbirth Educator, Grow Community): I’ve read enough that said, you know, boys in particular seem to be more at risk. That there’s maybe a genetic link that then makes boys at higher risk, not that the vaccinations are causing the issues, but that the vaccinations might be triggering the cause of the issues, and until we know more I just—I don’t feel good about it. 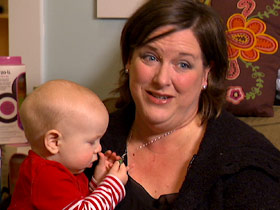 POTTER: The autism concern stems mainly from a report published 15 years ago in a British medical journal that has since been withdrawn and labeled a fraud. But Castanza isn't convinced that doctors know best.

CASTANZA: I don’t ever put full power and control into anybody who says, “I’m a scientist. I know what’s going on,” I don’t feel like anybody really has the right to take away that decision-making power, and I also feel like it’s an important responsibility for parents to not place the responsibility for the decisions around their parenting, their children, in the hands of someone else.

POTTER: Every state in the country requires children to be vaccinated before they can go to school. But in all but two states, West Virginia and Mississippi, parents can opt out by stating a personal or religious objection. In most states, including Massachusetts, there's no proof or explanation required. It's as easy as signing a piece of paper.

ROBBIN SUPRENANT (School Nurse, Amherst Regional High School): If a parent says that that’s a religious belief, that’s what we need to go with, and we need to keep our fingers crossed that there isn’t going to be an outbreak during the school year. Otherwise, those students would be held out of school until the period of communicability has passed, and then unfortunately other students and staff members could be subject to illness. 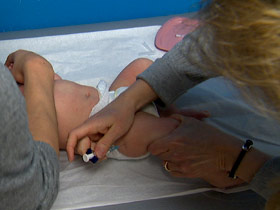 POTTER: The vast majority of American children get all of their recommended vaccinations. Only about one and a half percent are unvaccinated. But in some areas, the rate is significantly higher. In this part of Western Massachusetts, for example, it's six percent, and that raises the risk of outbreaks. A community with a vaccination rate that low loses what's called "herd immunity" to contagious diseases, so anyone who hasn't been vaccinated can get sick. That includes babies too young to be immunized and people with certain health conditions who can't be vaccinated.

DR. SNYDER: There are some schools where the children are completely unimmunized, and those children are at very high risk, should a child come with measles from another country. And again, all these diseases are just a plane ride away, and measles is incredibly contagious. One child who’s susceptible exposed to a child with the disease, there’s a 90-plus percent chance they're going to get that disease.

POTTER: Recent outbreaks of measles and whooping cough have been concentrated in areas with low vaccination rates, including religious communities of Orthodox Jews and evangelical Protestants, some of whom believe vaccination is interference with divine will. Some Catholics also object to a few specific vaccines because they're based on a cell line obtained from aborted fetal tissue in the 1960s. One of them is the relatively new chicken pox vaccine, and the Furton family, devout Catholics, wrestled with whether to give it to their youngest child, Maggie. 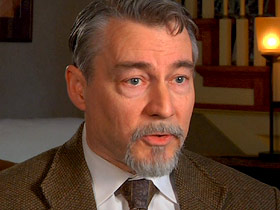 EDWARD FURTON (National Catholic Bioethics Center): On the one hand, you have your own child whom you love very dearly, and you don’t want to have to undergo any kind of disease, but you’re weighing against that in association with a product that is connected, yes, in a distant way, with abortion. And for those of us who are adamantly opposed to the harming of the innocent in any way, that’s a very serious problem for us.

POTTER: Instead of being vaccinated, Maggie was deliberately exposed to chicken pox and caught it, just as the rest of the family already had. It was the Furtons' way of making sure she was protected and posed no risk to anyone else. All of the children received every other recommended vaccine.

Furton is an ethicist with the National Catholic Bioethics Center, well aware that the Vatican advises Catholics they have the right to abstain from vaccinations only if it does not put children at risk and that protecting the whole population is more important than concerns about how some vaccines are made. 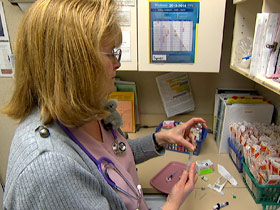 DEBORAH POTTER: In spite of the concern about abortion?

FURTON: In spite, yes. The connection is thought to be distant enough to justify what’s called cooperation with the wrongdoing of others.

POTTER: Jodie Castanza has no religious objection to vaccination; most people who opt out don't. For her, it's a personal decision that she thinks is of no one else's concern.

CASTANZA: People definitely will say that, you know, you’re putting other kids at risk with that and maybe, but kids are also at risk when they pick up sticks and play sword fights on the playground and, you know, slam each other into snow banks and put rocks in snowballs and you know, all—there’s so many risks that I’m not willing to take on guilt or ownership of that particular one at this point.

POTTER: In some ways, vaccines have been victims of their own success. Illnesses that once ravaged communities are now out of sight, out of mind.

DR. SNYDER: These are nasty diseases. These aren’t illnesses that most parents are familiar with now. These are diseases that frequently hospitalized, disfigured, permanently damaged, or killed children on a regular basis. There is really also a moral responsibility and an ethical responsibility, I think, for parents to look at their community and think, you know, would I want these children to be sickened because I decided not to vaccinate my child?

POTTER: What worries doctors like Snyder is that it might take a resurgence of preventable diseases for parents who now refuse vaccines to see them as essential.

In most states, parents can choose not to vaccinate their children based on a personal or religious objection. It’s a choice that has begun raising concerns about the ethics of refusal and the rising risk of outbreaks.