KIM LAWTON, correspondent: This is one of Jordan’s largest cities. There’s a bustling main street, dubbed the Champs Elysees, where almost anything can be bought and sold. There are schools, hospitals, and some 30 mosques. Tens of thousands live here. But this sprawling compound just five miles from the Syrian border is really not a city at all. It’s the Za’atari refugee camp, where Syrians have fled from the unrelenting conflict in their homeland. Almost two and a half million people have left Syria, in what the United Nations has called “the greatest humanitarian catastrophe of modern times.” Many have ended up here, in neighboring Jordan, in refugee camps and in communities across the country.

REV. NABIL HADDAD (Jordanian Interfaith Coexistence Center): You see our brothers and sisters, our neighbors, the Syrians, everywhere, not only the north, you see them in every city, in every street, in every town. And this has created a big burden on the Jordanian economy. 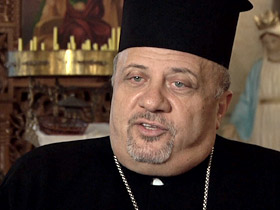 LAWTON: According to the UN High Commission for Refugees, almost 600,000 Syrians have officially registered as refugees in this nation of 6.6 million. But aid workers say at least the same number have not registered, largely out of fear of retaliation from Syria. The UN and international aid agencies have been working to meet the dire needs. Faith-based groups are actively mobilizing as well, and many religious leaders say they provide a unique contribution in the midst of the crisis.

WAFA GOUSSOUS (Orthodox Initiative): Many international organizations are doing great jobs. There are millions that are spent to help those people. But what is absent is the, is the human touch, is the love.

LAWTON: Wafa Goussous, director of the Orthodox Initiative, says this is what the religious groups do.

GOUSSOUS: Make the giving, the material giving, make it with love. So those people will, will feel the difference in their exile. 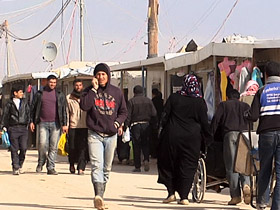 LAWTON: Some religious groups, including International Orthodox Christian Charities, IOCC, have been working here in Za’atari, the largest camp for Syrian refugees. The Za’atari Camp was established in July 2012 to deal with the huge influx of Syrian refugees flooding into Jordan. It’s difficult to get exact numbers, but about 100,000 refugees are estimated to be currently living here. And between 300 and 500 new refugees are still coming in every day. Syrians who don’t have a Jordanian to sponsor them end up here, and are forbidden to leave, unless they choose to return to Syria. Some still live in tents, although many have now been moved to small trailers or “caravans.”

DIMITRIJE DJUKIC (Int’l Orthodox Christian Charities): These refugees used to live much better life in Syria. And coming here they, they, they lost everything.

LAWTON: On this chilly day, we met Seham, who invited us into her caravan, where seven family members sleep in one room, including her son who was wounded in the war. It’s cold and drafty inside, but better than the tent they had before. She tells us rats and mice run around freely and asks IOCC for a bag to help protect her few possessions. IOCC tries to meet needs not covered by other agencies. The group distributes donations from outside partners, including many US churches. They give out things like hygiene kits, quilts, space heaters, kitchen supplies and blankets. In December, the group distributed 12,000 school uniforms and track suits to children in the camp. 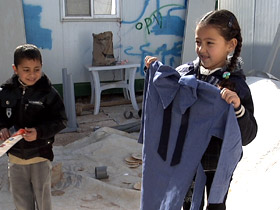 LAWTON: Qusay’s daughter proudly shows off her uniform. Her baby brother was born in the camp 14 months ago, just a month after they arrived. Qusay used to work at a Syrian government office. Now he’s dependent on international donations. He says they left Syria because they were afraid of the shelling. Now he says he’s afraid they’ll die of hunger instead.

While Za’atari gets much international attention, the vast majority of Syrian refugees—between 75 and 80 percent—actually live outside the camps. Many religious groups are currently shifting their efforts to help these “urban refugees,” who are more difficult to reach. Multiple families cram into small, unheated apartments paying high rents. They can’t get jobs here, so many are using up what savings they brought with them, supplemented by a small UN stipend. Bashir, Fadiya and their three children live with two other families--a total of 10 people--in this three-room apartment with little furniture. Bashir says they couldn’t survive without help from groups like IOCC. His dream is to get back to Syria as soon as possible, but he says, only if it is a Syria at peace. 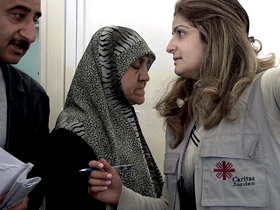 The Catholic group Caritas Jordan has centers across the country where refugees can come for help. This Caritas center in Zarqa serves about 200 people daily, and has been logging in some 100 more new families every day. Here, refugees can get medical assistance, emergency aid supplies and referrals for other help. Every center has a counseling program as well. In child-friendly spaces, children do art and play therapy. Their parents can receive individual counseling and group therapy sessions.

LAWTON: One of the Caritas volunteers is Bassam Zarrour, himself a Syrian refugee. Zarrour owned an electronics store in Homs, and says he had a “beautiful” life there until the violence exploded. He and his family left Syria last March. He heard right away about Caritas’ help for refugees and then became a volunteer, acting as a liaison between Caritas and his fellow Syrians. Like most of the Syrian refuges, Zarrour is Muslim. He told me helping others gives him a sense of purpose here. Caritas’ work is supported by international partners, including the US based Catholic Relief Services. CRS president Carolyn Woo came to see some of the projects. She says it’s crucial to work with local groups. 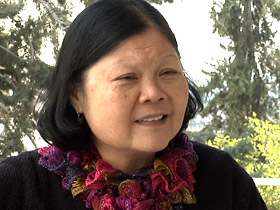 CAROLYN WOO (Catholic Relief Services): They’re the ones who know the local culture, they have the infrastructure, they are very committed themselves, so our job is really to enable them to be as successful as possible because they could really serve people in the best way.

LAWTON: As she toured several sites, Woo says she was deeply moved by the stories she encountered.

WOO: You look at the little children, they’re so wonderful but yet behind each of these wonderful people is a life that is completely disrupted. We see God in all of these people. We see that these are brothers and sisters like us. They’re all part of this human family.

LAWTON: Jordan has made the decision to keep its borders open as long as possible. The flood of Syrian refugees is the latest in a long line of people coming here, from Palestinians in 1948, to Iraqis, Egyptians and Sudanese. 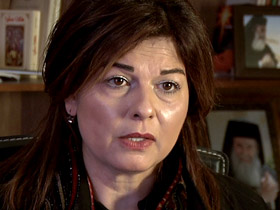 LAWTON: Father Nabil Haddad is Executive Director of the Jordanian Interfaith Coexistence Center. He says hospitality and helping others are strong parts of Jordan’s religious tradition.

LAWTON: Still, there are rising tensions between Syrian refugees and vulnerable Jordanians, who say they need help as well.

WAEL SULEIMAN (Caritas Jordan): In the beginning the Jordanian people, they open everything for Syrians, of course it’s a kind of solidarity. They start collaborating, supporting, you know, but I believe that today it’s... it became... a big problem for the Jordanian people. 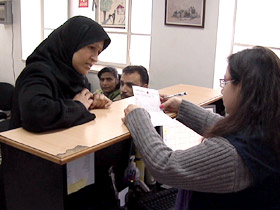 LAWTON: The Jordanian government now requires that at least 30 percent of aid for Syrian refugees is given to help needy Jordanians. Wafa Goussous says Jordan’s small Christian population is doing what it can to help both. Representing the Greek Orthodox Patriarch Theophilos III in Jerusalem, the Orthodox Initiative has partnered with US churches for several projects, including distributing food and other essential aid.

GOUSSOUS: It’s our moral duty, it’s our obligation, it’s our Christian presence, and our Christian witness, they’re both related, and we cannot just close our eyes on a crisis that is happening to other people and say, well, let the UN agencies deal with it, or the government. We are part and parcel. We are part of the fabric of this area.

LAWTON: Religious groups here are asking for more aid. Many are also urging the international community to work harder to find solutions to the conflict inside Syria, so the refugees can ultimately return.

HADDAD: We have this ongoing hemorrhage of innocent blood in Syria. I think it is the time now that we raise our voices.

LAWTON: The situation may seem insurmountable, but faith leaders say it’s not hopeless.

WOO: I think sometimes it’s easier to say, “This is too overwhelming. This is beyond me.” And I don’t think compassion and assistance is ever beyond anyone.

LAWTON: The most important thing, they say, is that the world not abandon the millions caught in the crisis. I’m Kim Lawton in Amman, Jordan.

ABERNETHY: What's the outlook for those people? Are they just stuck there indefinitely? 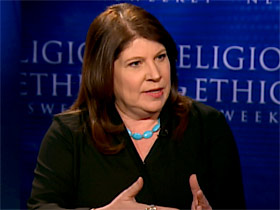 LAWTON: Well, unfortunately, they really are. The people in the refugee camps are literally stuck in place. They can't leave the camp unless they have a Jordanian citizen that puts up a payment and sponsors them. And the people that are in the host communities are also really struggling – they can't work, and they have nowhere to go.

LAWTON: Everyone we talked to said they'd like to go back to Syria, but clearly, because of the violence, they can't. Who knows if their homes are even intact, and even if the violence were to end, just the entire infrastructure of that country has been devastated by the conflict.

ABERNETHY: One of the people you talked to was worried about starving. Are people starving?

LAWTON: Well, they're not starving to death, but the amount of food they're getting is certainly very small. And many people without resources, they get rations from the UN and other food distribution, but they don't have a lot of food to eat.

ABERNETHY: What affected you the most?

LAWTON: I think just hearing all the stories of middle-class families, of real people whose lives have been completely torn apart. And over and over again, meeting those real people – it was very touching.

Almost two and a half million Syrians have fled their country in what the United Nations has called the “greatest humanitarian catastrophe of modern times.” Faith-based groups—Catholic, Jewish, Muslim, Orthodox, Mennonite, and more—in Jordan, home of the largest Syrian refugee camp, are doing what they can to help. “Behind each of these wonderful people is a life that is completely disrupted. We see God in all of these people. We see that these are brothers and sisters like us,” says Catholic Relief Services president Carolyn Woo.