EDWARD SNOWDEN: I’m just another guy who sits there day to day in the office and watches what’s happening and goes, “This is something that’s not our place to decide. The public needs to decide whether these programs or policies are right or wrong.”

LUCKY SEVERSON, correspondent: So is Edward Snowden a saint or a sinner or any of the multitude of labels people have used to describe him?

President Barack Obama: (at press conference) No I don't think Mr. Snowden was a patriot.

SEVERSON: Was what he did right or wrong? 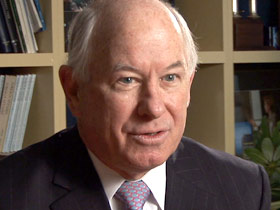 LOUIS CLARK (President and Corporate & Financial Accountability Director, Government Accountability Project): They see this as an ethical, moral decision, and they take a step in the direction of blowing the whistle.

BILL HARLOW: I don’t think anybody does—takes an act and says to themselves, “What I’m doing is immoral, but I’m going to do it.” People always rationalize.

SEVERSON: Matthew Aid has authored two books about spying and the NSA.

MATTHEW AID (Author, Intel Wars): I know for a fact that there’s been immense damage to the ability of the National Security Agency to collect intelligence overseas.

SEVERSON: But Snowden says it’s the “intelligence,” the millions and millions of phone numbers and email addresses collected in this country that prompted him to pilfer an estimated 1.7 million classified documents. 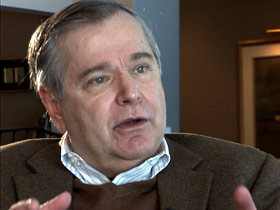 HARLOW: What are you giving up?

SEVERSON: Bill Harlow served 25 years in the Navy and became the top spokesman for the CIA.

CROWLEY: In my view, rather than buying a ticket to Hong Kong, he should have bought a ticket to Washington.

SEVERSON: P.J. Crowley is a former Army-Air Force B-17 pilot and was also the assistant secretary of state for public affairs. Now he’s a professor at George Washington University.

CROWLEY: Any whistleblower who calls himself a whistleblower should in fact be prepared, you know, to present himself to authorities and accept whatever the consequences of his actions are.

HARLOW: He could easily have gone to the inspector general of the NSA. He could have gone to members of Congress. What you don’t do is run to Chinese-controlled Hong Kong and to Moscow to hide away. You do your act, and then you take the consequences. He didn’t do that. 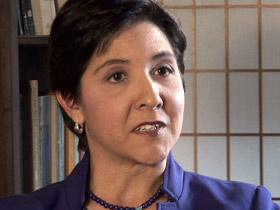 SEVERSON: Melissa Moschella is an assistant professor of philosophy at Catholic University.

PROFESSOR MELISSA MOSCHELLA: You could think, well, what does it really mean to accept the punishment? The fact that he was willing to do this means he basically gave up his life as he knew it. He’s effectively in exile indefinitely. And who knows what's going to happen to him?

AID: Where is it written that to be a legitimate whistleblower you have to stand before the firing squad and take the bullets in the chests? Let’s face it, this country does not have a great track record when it comes to giving whistleblowers the due that is owed to them for coming forward.

THOMAS DRAKE: I went through every chain of command that existed, including internal inspector general. 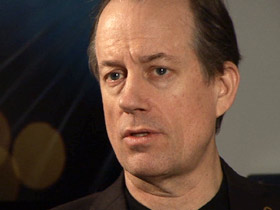 SEVERSON: Snowden has said that he skipped the country because he saw what happened to whistleblower Thomas Drake. Drake was an NSA senior analyst who went to the Baltimore Sun only after he had gone up the chain of command to complain about a billion-dollar spy program that was later abandoned.

DRAKE: I was put under severe duress. I was surveilled physically and electronically. I was threatened. At one point the chief prosecutor, in April of 2008, said, “How would you like to spend the rest of your life in prison, Mr. Drake, unless you cooperate with our investigation?” And so they came after me with everything they had.

SEVERSON: Ultimately all charges were dropped, but only after Drake lost his job and mortgaged his home to pay legal bills.

JESSEYLN RADACK: I mean, when you are a whistleblower, you are extremely isolated. The government called me a traitor and a turncoat and a terrorist sympathizer in the New York Times, and that makes you pretty radioactive.

SEVERSON: Jesselyn Radack is another whistleblower who got in serious trouble after she went public when she was an ethics advisor for the Justice Department. 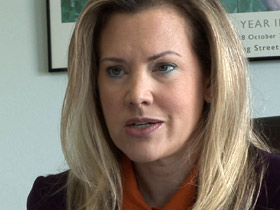 RADACK: I got a call one day asking about the ethical propriety of interrogating the so-called American Taliban, John Walker Lindh, without an attorney.

SEVERSON: She replied it wasn’t ethical or proper, but then she learned that Lindh was interrogated without his lawyer and that the interrogation was used as evidence in his trial. She also discovered that her correspondence to the Justice Department had been purged. That was when she resigned and called a reporter. The case collapsed and Lindh pled guilty to two relatively minor infractions, although he was given a lengthy sentence.

RADACK: So I thought the whole ordeal was over at that point. My ordeal had only just begun, because I ended up unleashing the full force of the entire executive branch in a really ugly way.

SEVERSON: The government brought a criminal case against her, referred her for discipline before the DC and Maryland bars, and put her on the no-fly list. Ultimately the criminal case was dropped, the bar complaint dismissed, and she is no longer on the no-fly list. She says she got through it with the help of her rabbi and Exodus 22:3, which says, “Thou shalt not follow a multitude to do wrong.”

RADACK: That has been something that has informed my life. It is always there in the background. 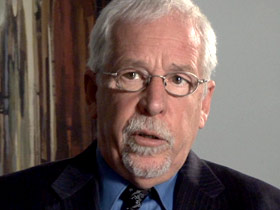 CLARK: The reprisals are really heavier today than they were, you know, 20 years ago.

SEVERSON: Louis Clark heads the Government Accountability Project, which has represented about 5,000 whistleblowers, including Thomas Drake and Edward Snowden. He’s a former United Methodist pastor whose father was investigated wrongfully for communist ties by the FBI and himself investigated for his civil rights work.

CLARK: I’m as patriotic as any person, I believe, in terms of my government, but I also have a faith which says that when you’re government is wrong, you need to stand up and challenge that.

SEVERSON: P.J. Crowley left the State Department after he complained in a speech that Private Bradley Manning had been mistreated. He does not feel the same about Edward Snowden. 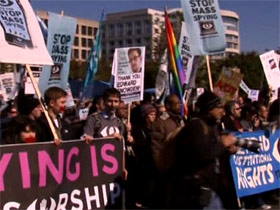 SEVERSON: So why then does a slim majority of Americans in a recent poll consider Edward Snowden a hero? Why the rallies in his support?

SNOWDEN SUPPORTER: I'm outraged, like most people here, you know, at the massive surveillance that's going on, and people just don't seem to be upset about it.

HARLOW: People have a right to be concerned about privacy, and I would argue that the information collected on you by Google or Yahoo or Amazon is much, much greater than any exposure you might have from NSA trying to prevent terrorism.

AID: Have we given up too much of our privacy rights and freedoms in the 12 years since 9/11 in the name of national security?

CROWLEY: What do you get by the Snowden revelations—and I acknowledge that the debate is useful, you know, but at what cost? I still think we have to figure that out.

SEVERSON: For now, a standoff: Snowden says he won’t come home if he’s going to be prosecuted, so it's unlikely he'll be coming home any time soon.

Is Edward Snowden a hero for revealing government wrongdoing, or a traitor for leaking classified information? “I don’t think anybody acts and says to themselves, ‘What I’m doing is immoral, but I’m going to do it.’ People always rationalize,” according to former CIA spokesman Bill Harlow. Correspondent Lucky Severson reports on the debate over the morality of Snowden’s actions.

The Ethics of Government Data Collection