LUCKY SEVERSON: A rally at the Historic King Solomon Baptist church in Detroit on behalf of the 23,000 city workers who are facing cuts to their pensions. Not a happy crowd.

REV. CHARLES WILLIAMS II (Historic King Solomon Baptist Church): We cannot allow for our brothers and our sisters to be on the side of the road. Jesus tells the story about us caring about our neighbors. Politicians don’t care about us.

SEVERSON: The workers thought their pensions were protected by Michigan’s constitution but a judge ruled that bankruptcy law trumps relevant provisions of the state constitution. Brenda Goss Andrews, a Deputy Chief, retired after 30 years in the Detroit police department. 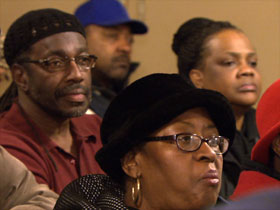 BRENDA GOSS ANDREWS: People are suffering right now. I get phone calls every day. People are worried about, will I lose my home? What do I need to do? How am I going to buy my medication?

BISHOP EDGAR VANN (Second Ebenezer Church):The average pension is $19,000 a year, so they’re not living lavishly, by any means. It’s just a means toward an end of them being able to take care of themselves and their families.

PATRICK SULLIVAN: At Christmas time, people need water. So when my children were opening their gifts, I was at work. I made sacrifices for this city, and they can’t make a sacrifice for me. It’s ridiculous.

SEVERSON: It may seem ridiculous and unfair to the folks here, but unfortunately, it’s the reality. Bankruptcy law comes first. That’s according to Laura Bartell, a professor who teaches bankruptcy classes at Wayne State University Law school. 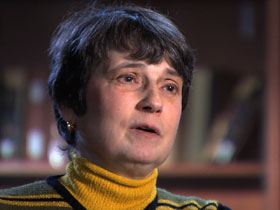 PROF. LAURA BARTELL (Wayne State University Law School): You take a typical bankruptcy, take a business, the employees have done nothing wrong. They worked for the business. They’re entitled to their wages, and if the company goes bankrupt and is unable to pay their wages, they’re going to lose out.

SEVERSON: Professor Bartell says the only ones who make money in a bankruptcy are the lawyers, whose fees will be, she says, astronomical. She says bankruptcy was the only way forward, that Detroit simply could not pay all it owes 18 billion dollars, as much as 3.5 billion dollars of it just in pension payments. There’s no single reason, she says, Detroit is in the mess it’s in.

PROF. LAURA BARTELL: You can’t say because there was mismanagement of the pension funds. You can’t say it was all due to the decline in population of Detroit. It was a mixture of all of these factors.

SEVERSON: Factors like auto makers shifting to automation and moving plants to other states and other countries. The city lost a lot of revenue after the population dropped from 1.8 million in 1950 to just 700,000 today. 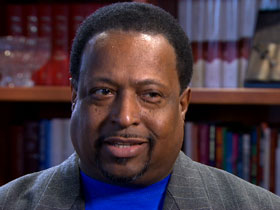 BRENDA GOSS ANDREWS: I think there needs to be belt tightening. Certainly the city didn’t make good choices. We didn’t have good leaders. There was corruption. We know this, but the average person working, we came to work every day.

SEVERSON: So now the question for the bankruptcy judge is how should the cuts be divvied up – the pensioners, the bond holders, and the banks.

REVEREND CHARLES WILLIAMS II: We bailed out the banks, you and me, our tax dollars bailed out the banks at 1.8 trillion dollars. We lifted them up when they were falling down, so it seems like to me that these same corporate CEO’s, these same banks who ask of us to give; they would give to us to help us sustain.

SEVERSON: Andy Levin is a local businessman who has started a Jewish effort to rebuild a ‘just’ Detroit called Project Micah. The name comes from the Prophet Micah who summed up the 613 Jewish commandments. 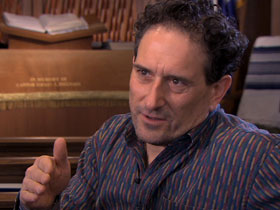 ANDY LEVIN (Project Micah): He said, do justice, love mercy and walk humbly with your God. Justice, mercy and humility. To allow 70, 80, 90-year-old people who worked 30 or 40 years, hard work, honest work, showed up every day and to take half or a third or a quarter of their pension away is unconscionable.

REVEREND CHARLES WILLIAMS II: If I think about Detroit and I think about Christ. He went into the temples. He kicked the money changers out and he cursed them. I think Detroit is in that same place.

SEVERSON: It was proposed that the city could reduce its debt burden if it sold its renowned art collection housed in the Detroit Institute of Art, also known as the DIA. National and local philanthropic foundations have committed $370 million to save the art and help reduce cuts to pensioners.

PROF. LAURA BARTELL: The DIA is a tremendous treasure for the city of Detroit. It’s not as wonderful if you don’t have that art. Then you have a great big museum boarded up and empty in the heart of the cultural center.

SYLVESTER DAVIS: Art is beautiful. It’s good to look at but when it comes to weighing it with a human life or human sacrifice, no sir. The art can go. 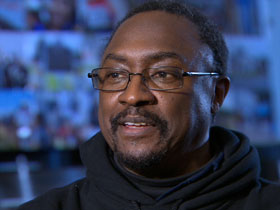 SEVERSON: Sylvester Davis, father of four, receives a pension of 2800 a month, worked for the water department 25 years. He says even a 15% cut would hit hard.

SYLVESTER DAVIS: I would be probably standing on a corner, with my family, holding a sign “will work for food” something 'cause I will definitely lose my home.

SEVERSON: Do you think the pensioners should take cuts?

SEVERSON: Who’s carrying on the fight for you?

SYLVESTER DAVIS: God, God. I’m doing what I can do and I’m counting on him to do the rest.

BISHOP EDGAR VANN: You’ve got to have inspirational leadership. Detroit’s a city where people desperately need hope. They need to know that things are going to change. 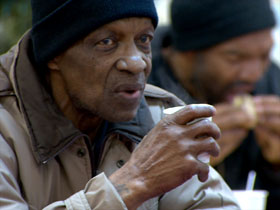 SEVERSON: The Catholic sponsored Capuchin Soup Kitchen is quite a cheery place, considering. Brother Jerry Smith runs it, says he sees the faces that belong to the numbers of hungry and hurting. Brother Smith agrees that faith groups have a role to play but thinks that till now too many have sat quietly on the sidelines not getting involved.

BROTHER JERRY SMITH (O.F.M., Cap): The values of the church people are pretty much the values of the rest of society and it’s the rest of the society, I think, that has allowed Detroit to happen--the abandonment of the city, the exodus of the jobs, the flight to the suburbs. For the most part, I think the churches pretty much bless and consent to what the society has done to this city.

SEVERSON: Cities and states nationwide are watching what happens in Detroit very closely. That’s because so many of them are facing the same dilemma. A Pew Center study found a shortfall in state pensions of over 1.3 trillion dollars and that was in 2010. So what happens here will likely become a model of what to do or what not to do for the rest of the country.

They are doing things here, lots of money being invested downtown. An inner faith effort led by Bishop Vann and Andy Levin to get the ball rolling, to improve education, attract jobs and residents. Notwithstanding its financial deficit, there’s no deficit of spirit here. After all this is Motown. So of course there’s a rap.

PASTOR PAT KIRBY (Shrine of the Black Madonna): (singing a rap) There’s a voice crying in the wilderness saying, you got to take a stand to get us out of this mess.

ANDY LEVIN: There’s a grit and a down-to-earth sense here that, and a love of place that is really rare.

SEVERSON: While the pensioners, the bondholders and the banks wait, the bankruptcy judge has made it clear that he wants cuts to the pensioners as small as possible, although for many, small cuts will still hurt. For Religion & Ethics NewsWeekly, I’m Lucky Severson in Detroit.

After decades of decline, are proposed pension cuts fair and ethical? “We cannot allow for our brothers and our sisters to be on the side of the road. Jesus tells the story about us caring about our neighbors. Politicians don’t care about us,” says Rev. Charles Williams II of Historic King Solomon Baptist Church.

Sequestration and the Poor