BISHOP MORRIS THOMPSON (Episcopal Diocese of Louisiana): We are a predominantly white tradition. Most people will affirm that racism is alive, but to talk about it and especially to, for the white community, to make a comment that they had something to do with this and repent of it—that’s different. So the service was about acknowledging what has taken place in history, apologizing for that, and seeking ways to see our neighbor in a different light.

(speaking to congregation during service): “Let us then offer to God our prayers of repentance and commitment to new life.”

Racism is a great sin, because we devalue a person simply because of the color of their skin, and no other reason. And I can’t respect somebody when I’m talking about them in a negative way. 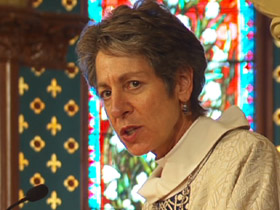 MOST REV. KATHERINE JEFFERTS SCHORI (Presiding Bishop, Episcopal Church USA): We’re beginning to see a much greater awareness of the interconnectedness between the history of slavery and current issues about economic inequality, about poverty, about incarceration rates. People are beginning to understand how pervasive this history has been in the United States and beyond the United States.

THOMPSON: There’s great tension in this city, but it is great tension also in other areas of the diocese that is unspoken, but everyone knows that it’s there. Everyone treads lightly around that. 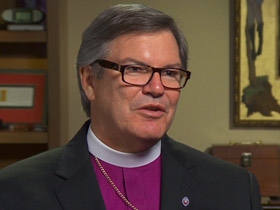 THOMPSON: The service was not intended to make people feel guilty of not recognizing this as an issue, or the issues that happened 200 years ago of slavery, but to be aware. Because not to be aware of it, it’s like sticking your head in the sand. It’s like living out, I think, your ancestor’s beliefs.

Our rectors and priests in the diocese need to start walking their neighborhoods to see who’s in them and inviting them into the church. There are people that don’t have a church home, and whether they’re African Americans or Hispanics or whites, I don’t really care, but everybody is welcomed, and we need to invite. We need to be more hospitable in inviting people.

More and more churches and denominations are continuing to repent of the sin of racism. The recent reconciliation service in New Orleans was “about acknowledging what has taken place in history, apologizing for that, and seeking ways to see our neighbor in a different light,” says Bishop Morris Thompson of the Episcopal Diocese of Louisiana.