BOB ABERNETHY, host: We examine the two canonizations now with Kim Lawton, managing editor of this program, and Kevin Eckstrom, editor-in-chief of Religion News Service. Kevin, welcome. This double canonization – unprecedented – and is there a message?

KEVIN ECKSTROM, (Religion News Service): Well, there is a message, you know, John Paul was on the fast track to sainthood, and the Vatican officials basically came to Pope Francis and said, “Okay, we're ready to make him a saint.” And the pope said, “Well what about John XXIII? You know, can we make him a saint too?” And they said, “Well, we don't have the second miracle yet.” And the pope said, “Ah, that's okay, we don't need that.” So what he was trying to do was offer something to both sides of the church: the conservatives who really hold up John Paul as an icon, and the progressives who really see a hero in John XXIII.

ABERNETHY: Kim, talk a little about the legacy of these people. 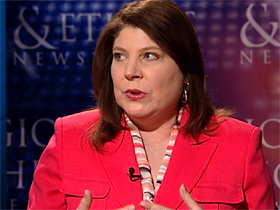 KIM LAWTON, managing editor: Well, both of them were, you know, giants in the church, and part of the reason for the fast track was because there was such an outpouring of calls for John Paul II to be made a saint when he died in 2005 – at his funeral, people were calling for that. And so that shows the amount of respect I think they had for his fighting against communism. For many, especially conservatives, really appreciated his standing for what they saw as the orthodoxy of the church. He really stressed things like abortion, but also at the end of his life, people liked the way he modeled how to be older and how to be sick. So there was that. He had a great outreach to the Jewish community, to young people, and just was this towering figure.

ECKSTROM: And John XXIII, I think really took the Catholic Church and turned it upside-down. And we're still trying figure out what all happened from Vatican II in the 1960s. But he touched the lived experience of Catholics around the world in a way that few other popes have done, so the way that Catholics experience mass, the way that they see themselves as a church, the way they see themselves in relation to the hierarchy. And even, as Kim mentioned, you know, their relationships with Jews. Up until Vatican II, Jews were blamed for the death of Jesus, and John XXIII and Vatican II said, “No, absolutely not.” So he really, you know, he said when he convened the council, he wanted to open the windows and let some fresh air blow in through the church, and we're still feeling the wind.

LAWTON: He was also known for his humor. The story we've been hearing a lot is he was asked one time how many people work at the Vatican. He said, “Eh, about half of them.”

ABERNETHY: I love that. But with John Paul II there's been some criticism, too, that in the eyes of many people he did not pay enough attention to the pain of so many people because of the sex abuse crisis in the church.

LAWTON: There's been a lot of criticism about that, especially from victims’ rights groups saying that that really marred his sainthood and his reputation. But other people say saints weren't supposed to be perfect, they were just supposed to lead lives of heroic virtue.

ABERNETHY: And finally, another thing that's been up there is – should any pope be canonized?

ECKSTROM: Well, it's a good question. In the first thousand years of the church, about 80, 85 popes were made saints. In the next 900 years, just three. So now, seven of the last ten dead popes are in process of being made saints in some degree or another. And so there's this renewed push now to make popes into saints, and that's not always how it was done in the church.

LAWTON: Some people say saints are supposed to be models for real people, and so who can a pope model for except for another pope? And so it's been an interesting conversation.

This is a big weekend at the Vatican as Pope Francis elevates two of his predecessors to sainthood: John XXIII and John Paul II. Host Bob Abernethy, managing editor Kim Lawton, and Kevin Eckstrom, editor-in-chief of Religion News Service, discuss the legacies of these two new saints and what their canonizations mean to Catholics and non-Catholics alike.