PUNITA TANEJA: This is Kavita.

FRED DE SAM LAZARO, correspondent: Punita Taneja has a staff of four domestic workers, all living in quarters behind her large New Delhi home. She also has a gardener and a night watchman.

TANEJA: They have specific tasks which have been allocated to them, and specific times also.

DE SAM LAZARO: The workers, migrants from impoverished regions of India, told us they were grateful for a safe home, food, and a compassionate employer, a Delhi socialite who owns a software firm with her husband. 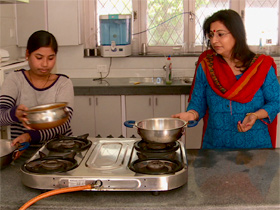 DOMESTIC WORKER: I am from Calcutta and came here because my husband was not earning much, and things were very tough. I don’t even have an education.

DOMESTIC WORKER: Madam has trained me, and now I know how to cook.

DE SAM LAZARO: It might seem like an Indian Downton Abbey, the epic TV series of benevolent rich employer and household staff. But in India you don’t need to be rich. Nearly everyone, from the lowest rungs of the middle class on up, employs domestics, often in virtual slavery.

India has strong trade unions. It has laws that protect the rights of workers. But domestic work isn’t covered by them. In fact, in all but a few places employers aren’t required to pay their domestic workers the legal minimum wage.

One of the Indian capital’s best known lobbyists for domestic workers is a Belgian nun. Jeanne Devos founded the National Domestic Workers Movement 34 years ago. It tries to organize among this vast informal workforce, by some estimates as high as 40 million mostly women. Many were trafficked into the work as children.

SISTER JEANNE DEVOS (Founder, National Domestic Workers Movement): That’s a whole network of money, racket—it’s amazing. It’s one of the biggest incomes for most people. Just go to the villages, get them poor children, sell them back in the city.

LEEZA JOSEPH: Domestic workers are very invisible. They are not recognized as workers. 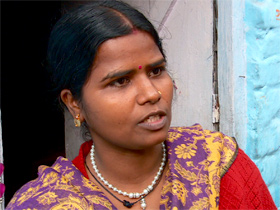 NISHA RAO: Everyone here is a domestic worker.

DE SAM LAZARO: In this Delhi slum we met Nisha Rao. She’s 35, and already she’s worked a quarter-century as a domestic—hardly an exception.

RAO: This grandma, she’s is the oldest one in the neighborhood. Even at her age she still works in two homes, doesn’t even get a day off in a month. This is a young girl...

DE SAM LAZARO: Radhika is 12 and still in school, a sixth grader. But every weekday after school and on weekends she works in a home caring for a six-year-old child.

(to Nisha Rao): How much does she get paid?

RAO: I wanted to go to school but that was not an option. With no education, domestic work was the only option. My aunt found me a family.

JOSEPH (speaking to domestic workers at unionizing meeting): We’re always divided by caste, but we are all equal.

DE SAM LAZARO: Although discrimination based on caste is illegal, Joseph says domestic workers, most from lowers castes, still suffer from age-old prejudices.

JOSEPH (speaking to domestic workers at unionizing meeting): You don’t get respect. You have to eat off separate plates, drink from separate glasses. 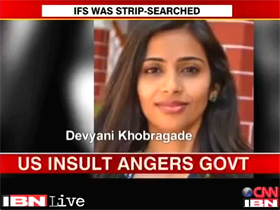 DE SAM LAZARO: She says the largest societal indifference was evident in the diplomatic row that followed the arrest in New York last December of an Indian diplomat.

DE SAM LAZARO: Devyani Khobragade was charged with visa fraud for failing to pay her domestic worker, also from India, the American minimum wage. In Delhi’s official circles, there was widespread condemnation of the diplomat’s treatment. It provoked tit-for-tat responses.

Indian television news coverage: “Security barricades being removed from the US embassy in Delhi…”

DE SAM LAZARO: In spite of wall-to-wall coverage of the incident in India, Leeza Joseph says the charges against the diplomat got, at best, dismissive mention.

JOSEPH: It was like why the US government is making a big issue about just not paying to a domestic worker? Because in India many do not pay, so for Indians it was not a big issue.

DE SAM LAZARO: How well a minimum wage of any law could be enforced is a big question. Devos’s group did manage to get domestics included in a bill that protects workers from sexual harassment. But there was strong resistance at first, she says.

DEVOS: The rationale of the ministry of women and children was clearly the home is a home and no workplace. Finally, we came to know from people in the ministry that it was because it’s the biggest group behind closed doors, and we won’t be able to handle it.

DE SAM LAZARO: The enforcement would be too difficult? 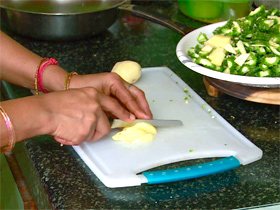 DE SAM LAZARO: But slowly, she says, things are beginning to change, especially in the rapidly modernizing big cities.

SR. JEANNE DEVOS: For instance, now in cities like Bombay, and you will have the same in Delhi, we have areas where there is such a demand for domestic workers, where people pay double the minimum wage. If there is a shortage of that particular group of workers, the salaries go up.

DE SAM LAZARO: And for some, it’s a business opportunity. This company, named B-ABLE (Basix Academy for Building Lifelong Employability), was started two years ago by a California native whose spouse was a British diplomat in Delhi.

SHAWN RUNUACRES (B-ABLE): It was a very pure business model, helping workers find people and helping people find workers, then helping them to skill up. It’s helping them to join the organized world rather than keeping them in the darkness.

LALITA SUBRAMANI (B-ABLE Trainer): Since I’ve been working as a domestic worker for the Canadians it did help me develop my interpersonal skills, like conversation skill and how to deal with people. It definitely helped.

ASHA KUMAR (B-ABLE Trainer): Maybe because they have to do this work themselves in their own countries they respect this work. They don’t look at the girl who comes into their home as a slave or servant. But in the past three years I have been placing people in Indian households. Things are changing—slowly, but they are changing.

DE SAM LAZARO: Punita Taneja is a client who likes to think herself part of the shifting social mindset.

TANEJA: The biggest mass that we have is the uneducated mass which comes from the villages, and they are also seeking to improve their own future. So I feel if we who have been blessed with all this start reaching out, somewhere we will start making a difference.

DE SAM LAZARO: But she admits it’s a small start to formalize a mostly underground industry that thrives on an abundant supply of impoverished women. For now, activists must count their victories one at a time—and perhaps in a generation.

RAO: From morning to night, everything I do is for my daughter, because all of the problems I’ve had in my life have been because I didn’t have an education. I want my daughter to study.

Correspondent Fred de Sam Lazaro reports from New Delhi on the tens of millions of unprotected, underpaid, and largely invisible domestics, many of whom were trafficked into the work as children. He also talks with Sister Jeanne Devos, a Belgian nun who founded the National Domestic Workers Movement to represent them.