BOB FAW, correspondent: Despite all her success as a best-selling novelist, a Hollywood screenwriter, and a journalist working in dangerous places, nothing she did, says Sara Davidson, ever prepared her for the prospect of dying.

SARA DAVIDSON: I would feel terror and nausea because I had no certainty that there is an afterlife. The idea of everything ending in nothing was terrible.

FAW: In 2009, though, Davidson was lucky enough to meet this remarkable man, Rabbi Zalman Schachter-Shalomi, then 85, a founder of the Jewish Renewal movement. Appearing recently at a Boulder, Colorado book-signing, he remembered that when they met he wanted someone to pass along all he had learned—about dying. 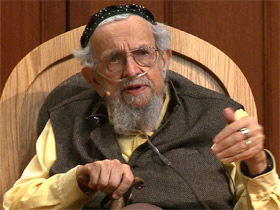 RABBI ZALMAN SCHACHTER-SHALOMI: I felt that what I needed to share with people at this time is just stuff that I didn’t hear from any of my teachers.

DAVIDSON: He said, “There is something I want to do with you. I want to have a series of talks about what I’m calling The December Project. When you feel you’re coming to the end of your tour of duty, what is the spiritual work of that time, and how do we prepare for the mystery?”

FAW: It was an unlikely collaboration. After a lifetime of scholarship and meditation, the faith of the rabbi was profound. Davidson, who considers herself a secular Jew, calls herself “a spiritual mutt” and a skeptic.

DAVIDSON: I’ve got this very cynical mind that’s always poking holes in whatever theory or theology is presented to me. And he said, “I don’t want to convince you of anything. What I want is to loosen your mind.”

FAW: The rabbi and the skeptic met every Friday for two years, with him teaching her that death is a mystery which need not be feared if she would trust her intuition more than her intellect. 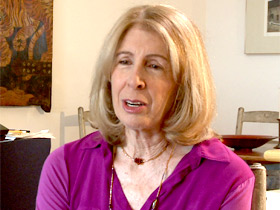 DAVIDSON: He said you need to create an inner space, an inner sanctuary, a place where you can go that it will be like a home base in the midst of all the humble and rumble and tumble of life, that you can go inside and there’s a place there that’s quiet and still, and it’s in that place that you can be most open to intuition.

FAW: What she learned from all those sessions is now chronicled in this book, “The December Project,” about getting in touch with what the rabbi calls “that sacred inner space.”

RABBI ZALAM SCHACHTER-SHALOMI: I want to cut myself off from all the other outside influences so that I can catch my breath and find my center. That is already creating the sanctuary, sanctuary in the sense of I flee to the place where I feel safe.

DAVIDSON: Now the big question is how do you know something is genuinely intuition or guidance or wisdom and not just a random thought popping in your head? And I asked him that, and he said there is no litmus test, unfortunately, to tell you this is authentic wisdom, this is a real intuition, or it’s just a thought. But when it happens to me, if I feel like I can do something with it, then I have a sense that it’s the real juice.

FAW: Only at that point, the rabbi taught her, is one able to “let go” and accept death.

DAVIDSON: Really letting go is the ultimate message of The December Project, and of, I think, all spiritual traditions, and it’s something you do moment by moment by moment. You let go as things arise. You start with small things. Somebody cancels a lunch date that you were really looking forward to and you built your whole day around it and suddenly it’s gone and, you know, you’re disappointed, but can you let go of that disappointment? It really is about acceptance. Can you accept what is? And then you move on to bigger things, 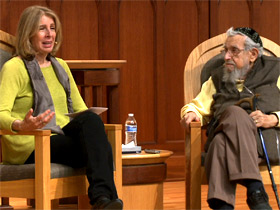 ultimately to “I’m a mortal, and like every mortal I will leave this earth one day.”

FAW: Davidson said she learned that everything he taught stems from his unshakeable conviction that in all things there is a touch of the divine; that God is as close as the vein in one’s neck.

DAVIDSON: What he means is whatever that force is that causes my eyes to see and my heart to beat and the blood to flow through my body, whatever that source of kindness and love and oneness, whatever that is I’m so grateful it’s there.

RABBI ZALMAN SCHACHTER-SHALOMI: When I say God I don’t mean necessarily an old man, but I mean a center of awareness, volition, and compassion and grace, and that I can make a space for if I spend time in my inner sanctuary.

FAW: If all this sounds too touchy-feely or impossibly dense, Davidson and the rabbi assured that Boulder audience that their Friday sessions were also filled with laughter—and music.

RABBI ZALMAN SCHACHTER-SHALOMI (singing): It’s a very meaningful melody for me as a way of getting into that space in which one can say goodbye to the body and to this world and to move on with a kind of hope and gentleness.

FAW: Here the rabbi, now 89—married four times with 11 children—reveals himself not only as a philosopher, but as an irrepressible showman, directing his listeners to act as a back-up chorus as the rabbi sings the spiritual “Travelin’ Shoes,” which is all about getting ready to meet one’s maker. 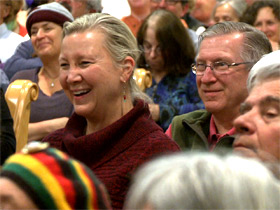 DAVIDSON: You mean you’re ready to go? You’ve got on your travelin’ shoes?

RABBI ZALMAN SCHACHTER-SHALOMI: I just would like to be like a drop in the ocean and dissolve in the divine being. That’s enough.

FAW: And while Sara Davidson concedes she’s not quite that far along, she says she’s come a long way from that “terror and nausea.”

DAVIDSON: Having the gift of spending two years in intimate conversation with Reb Zalman has changed the way I approach life.

FAW: So are you more comfortable now with the concept of death?

DAVIDSON: Yes, I am more comfortable. But I’m not where he is at yet, but I’m definitely getting there.

FAW: That notion of getting ready by letting go was imparted once again when the rabbi gave a benediction to his audience in Boulder.

FAW: The spiritual heavyweight and the skeptical seeker confronting the mystery and the marvel of death—together.

For Religion & Ethics NewsWeekly, this is Bob Faw in Boulder, Colorado.