LUCKY SEVERSON, correspondent: Matt Seilback graduated from Covenant Theological Seminary in St. Louis, but now he creates videos. He made a choice that an increasing number of seminary and divinity school graduates are being forced to do something other than being a pastor.

MATT SEILBACK: I had some interviews, but nothing ultimately panned out. Our film company that I started, our focus is to cultivate goodness, to uproot ugliness and cultivate goodness—and to show good in the world.

SEVERSON: Allen Sipe started looking for a pastoring job long before he graduated with a master’s degree three years ago. For now, he’s working as a shopping-mall security guard. 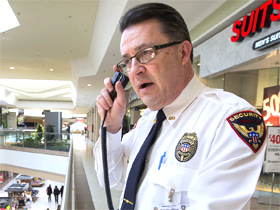 ALLEN SIPE: It’s disheartening. You know, you send out scores of resumes and get no answers.

SEVERSON: The reality is there are not nearly as many available jobs as pastors as there were even a few years ago. Seminaries and divinity schools have seen a drop in enrollment, and especially in the number of graduates who become pastors. There are several reasons, but the main one is that not as many people are attending mainline churches anymore. So there is less need and less money to afford a pastor. This is Greg Sterling, dean of the Yale Divinity School.

DEAN GREG STERLING (Yale Divinity School): There are about 300,000 congregations and churches in the United States. I don’t know what percentage of those are financially viable in the sense of having the capacity of supporting someone on a full-time basis, but my guess is that the majority are not.

SEVERSON: Yale Divinity School students come from several different denominations. Last year only one-in-five graduates went on to become church pastors. Sixteen percent became chaplains at hospitals and schools. About that many will teach in parochial and independent schools. A majority of the rest go to work for nonprofits, like Steven Masbach. Even as he completes his three-year master’s degree, he’s working for a church organization that builds affordable housing. He has a master’s in real estate development and was arranging financing for rich home buyers, but something was missing.

STEVEN MASBACH: Missing in the sense that when you’re giving financing to multimillionaires in New York City, and you’re saving them an eighth on their mortgage rate, you’re not really helping anyone but them. 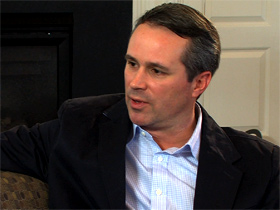 SEVERSON: So he applied at Yale, and he’s received generous financial aid from the school. He won’t have a congregation, he says, but he’ll have a ministry: building affordable housing.

MASBACH: For me, being a pastor is something that’s sacred—that you have a calling that the Lord has placed on your heart. And I felt that my calling has been in the social sector in housing.

SEVERSON: Dean Sterling says is it is not unusual to have students who had promising careers but found it spiritually unsatisfying. Twenty percent of entering Yale Divinity School students hold advanced degrees, like Allyson McKinney, who has law and MBA degrees. She has worked as an international human rights lawyer specializing in women’s rights.

ALLYSON MCKINNEY: I realized that a lot of what I wanted to say about human rights and about women’s rights I wanted to say to my own faith community, because I believe that justice is the work of the church. It is a ministry that we’re called, as Christian believers, to be involved in.

SEVERSON: Enrollment in theological schools has been dropping since 2006. Dean Sterling says along with the declining membership in virtually all but the more conservative denominations, another big factor is student debt. 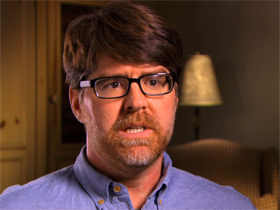 SEVERSON: It’s the seminaries sponsored by individual mainline denominations that have taken the biggest hit in enrollment. Luther Seminary in St. Paul was forced to cut its faculty after losing enrollment the past five years. Covenant Theological Seminary in St. Louis is run by the Presbyterian Church in America, and some of its graduates are having a hard time finding jobs. Five years ago, Brian Brown moved his wife and four kids from Alabama and his job as an accountant to attend Covenant and become a pastor.

BRIAN BROWN: I was always thinking there’s going to be a job at the end of this, you know. That was the hope and that was—and that’s the desire. It’s still the desire.

SEVERSON: Now, a year after graduation, he’s working two part-time jobs. His wife works full-time. Brown is struggling to make ends meet and to find a church that wants him and can afford a pastor.

BRIAN BROWN: Churches depend on the giving of others for their support and for paying for the ministry that is done. So as other people suffer in the economy, it trickles down.

STERLING: These students genuinely feel that existentially they have been challenged by God to serve people. How are they going to do that if they can’t be supported by one of these churches?

SEVERSON: The Lilly Endowment, which is the main funder of Religion & Ethics NewsWeekly, also sponsors a program to subsidize the salary for the first two years of some new pastors, like Corinne Ellis. She will leave Yale for a small church in Iowa. 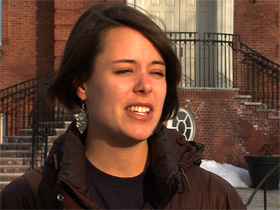 CORINNE ELLIS: I’ve seen the impact that God has had on my life and the lives of people I love, and I want to share that and help build that for other people.

SEVERSON: Increasingly students are planning on holding onto whatever careers and training they had before, and after they graduate becoming part-time pastors. It’s the new reality of smaller congregations.

SEVERSON: Donna Desilus had an MBA from Harvard before she came to Yale Divinity. She thinks she knows the problem and the solution.

ELLIS: I think church is going to change in the future. I don’t think, you know, denominations as they exist today are going to exist the same way in 20 years. I think the church is changing and has to change, and I think it’s exciting to be part of that.

SEVERSON: The exciting part hasn’t materialized for Brian Brown yet. He and his family continue to hang on. He’s still sending out resumes, still has faith that someone up there is going to help him find a job as a pastor.

SEVERSON: Allen Sipe is still looking. He thinks churches won’t hire him because he’s 57-years-old, and they can get a much younger pastor.

SIPE: I’ll do whatever I have to do. I have a wife to support. I have bills like everybody else. I will do what I need to do. That’s why I’m walking around the mall. But until I can’t breathe anymore, I’m going to continue looking for opportunities to be able to teach and to be able to preach and to work with people. That’s because that’s what I am. It’s not just what I do. It’s what I am.

SEVERSON: Dean Sterling says the number of students going into ministry reached its nadir three years ago when only half as many graduates as in the past entered the ministry. He says that number is improving, but doesn’t believe it will ever get back to what it was.

For Religion and Ethics Newsweekly, this is Lucky Severson in New Haven.

A struggling economy and a decline in attendance at mainline Protestant churches have created fewer openings for seminary graduates seeking to become full-time pastors. Some are resorting to other means of service or are working at any job they can find. “I was always thinking there’s going to be a job at the end of this,” says Brian Brown, a graduate of the Presbyterian Church in America’s Covenant Theological Seminary in St. Louis who has worked two part-time jobs to support his family. “That was the hope, and that’s the desire.”