CLAUDE MUSAYIMANA: Growing up I remember my grandmother would tell me how bad they were. In 1994, when we started killing people, the local leaders were supporting us. I did it freely, there was no blame, no consequences.

DE SAM LAZARO: Official broadcasts incited Hutus to kill Tutsis after an airplane carrying the country's then Hutu president was shot down. Ethnic tension had simmered for decades, aggravated first by Belgian colonial rulers who favored the minority Tutsi. That created an elite and bred resentment among the eighty-five percent Hutu majority. 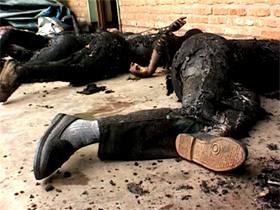 In previous ethnic flare-ups, churches had served as safe havens. Not in 1994. They became killing chambers, in some cases, with the complicity of their pastors.

CELESTIN BUHANDA: I fled to the church in Ntarama. The only reason I survived is that it was so crowded we decided to allow only women and children to shelter inside the church.

DE SAM LAZARO: All 5000 women and children sheltering in the church were killed with guns or grenades.

BUHANDA: We were eight siblings; in all six of them were killed.

DE SAM LAZARO: He survived a weeks’ long flight during which he suffered blows to the head, a severed Achilles tendon, and was left for dead.

BUHANDA: The killings continued until the RPF arrived.

DE SAM LAZARO: The RPF or Rwandan Patriotic Front, an army led by exiles from neighboring Uganda, took over the country. It drove genocide leaders and millions of Hutus into neighboring 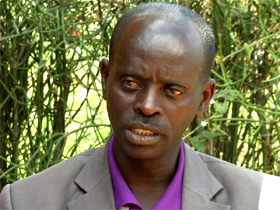 MUSAYIMANA: After the RPF came to power I fled to the south. I felt guilty about the innocent people I’d killed. I decided to come forward and tell the truth. I was arrested and put in prison.

DE SAM LAZARO: He spent 10 years in prison under a traditional, community-based court system set up to expedite the tens of thousands of genocide cases. Many perpetrators are now out and returning to their communities—an integration that would be difficult in any circumstance in this crowded country: twelve million people squeezed into a land the size of Maryland.

REBECCA BESANT (Regional Director for East Africa, Search for Common Ground): The way that people have managed to live together is pretty incredible.

BESANT: The fact that you know your neighbor killed your entire family and now you’re still in the house next to them and have to see them every day, a lot of people have sort of decided I don’t have a choice. And either I can let my rage absolutely consume me, or I can accept the fact that I’m not going anywhere, and he’s not going anywhere, and we have to make this work.

DE SAM LAZARO: Her agency is one of a number trying to foster reconciliation. It focuses on young Rwandans using a reality TV show to encourage entrepreneurs, training journalists in a country where media were used to incite the genocide, and working in schools. 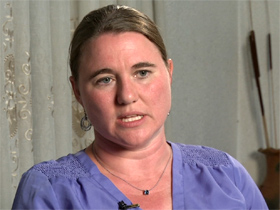 Many of today’s youth were orphaned by the genocide. Others have parents in prison. Through drama skits this troupe  encourages students to come together as Rwandans first.

BESANT: One of the things that we’re really trying to encourage for Rwanda in the future is how to talk about things before it explodes. If you're a young person and you’ve got a problem in your classroom, how do you express what that problem is, and you talk about it in a frank and open way. And I think that continues to be one of the challenges.

DE SAM LAZARO: Another approach, particularly among those old enough to have witnessed the genocide, is to tap the deep well of faith in this predominantly Christian country. Claude Musayimana and Celestin Buhanda met in one of many small groups set up by the Christian charity World Vision. It brought genocide survivors face to face with perpetrators.

MUSAYIMANA: The workshops were very important. For many years, I kept wondering what I could do to be free, to be accepted back in the village. This was an opportunity.

BUHANDA: They encouraged us to talk to the perpetrators, and I had to get up the courage. It wasn’t easy. We yelled at them at first, and that allowed us to feel relief, and we were able to find space in our hearts to forgive. 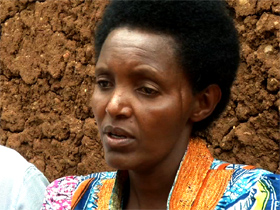 Alice Mukarurinda lost not only her infant daughter but also her right hand. She bears a deep facial scar, among other injuries. She met her attacker, Emmanuel Ndayisaba, six years ago in this group.

ALICE MUKARURINDA: All those years I looked at all Hutus as the ones that did this to me. I prayed to God that if I could meet the one person I would shift the blame from all Hutus to him.

EMMANUEL NDAYISABA: I saw visions of the people I killed for many years. It was painful. I was a Christian, an Adventist. I was in the choir. All that guilt made me sick.

MUKARURINDA:  When I first saw him, I was so traumatized I had to be taken to the hospital for 10 days. It was not easy. But then later I managed to forgive him. I believe it was God's power.

NDAYISABA: We have built 118 houses so far. That’s one of the things we do to pay back what we did, the genocide. I spent eight years in prison, came out, and did two years of community work. But it never feels like enough. I continue praying to God every day to receive forgiveness and healing for my heart.

MUKARURINDA:  The fact that we are given the time to speak out about our feelings made us feel much better. We had kept all the sorrows and pain in our heart. It was so painful.

DE SAM LAZARO: It helped that her attacker was literally working for forgiveness, building houses for people who were harmed in the genocide.

DE SAM LAZARO: World Vision’s Josephine Munyeli says so far her group alone has brought rapprochement between more than a thousand pairs of genocide survivors and perpetrators. But there’s no escaping it will be a long journey.

MUNYELI: The challenge is the magnitude of the genocide. It was very deep, It was awful. It was very bad, and you cannot exhaust it. You heal, but then another day you remember another story.

DE SAM LAZARO: It has helped that overall living standards have improved in recent years. And although the government has been criticized for human rights abuses, Rwanda has won praise for sustained economic growth, improved health care, and a bureaucracy largely free of corruption. And Rwandans continue to have enduring religious faith. Rwanda’s churches, so many of them complicit in the genocide, so many of them the very site where massacres occurred, are now playing a key role in the reconciliation that will be essential to rebuilding this country.

For Religion & Ethics NewsWeekly, this is Fred de Sam Lazaro in Nyamata, Rwanda.

In 1994, ethnic tensions in Rwanda culminated in one hundred days of killing, in which nearly one million Tutsi men, women and children were killed by their Hutu neighbors. Now, two decades later in the largely Christian country, many perpetrators are being released from prison and seeking forgiveness from those they traumatized. The Christian charity World Vision has brought together thousands of pairs of victims and assailants in small groups, encouraging restoration through building houses and planting trees for survivors. “I see real reconciliation is taking place, and it’s not fake. It’s genuine,” says Josephine Munyeli, a peace and reconciliation expert for World Vision. “You cannot fake reconciliation. You can’t.”