KIM LAWTON, correspondent: The super-star status of Pope Francis has captured the imaginations of Catholics and non-Catholics alike. And that has raised expectations about what could result from his Holy Land visit.

RABBI DAVID ROSEN (American Jewish Committee): Since he’s ascended to the papacy, he has acquired an attraction, a popularity that is quite amazing. I mean, his popularity really gives him an empowerment that I hope he uses. 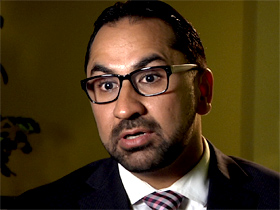 HARIS TARIN (Muslim Public Affairs Council): When he brings an issue to light, a lot of people hear about it. And not just in the Middle East, not just in the Vatican, but all over the world, people are watching and people are listening.

LAWTON: The main purpose of Francis’ trip is a series of meetings with Ecumenical Patriarch Bartholomew, spiritual leader of the world’s Eastern Orthodox Christians. The two are commemorating the 50th anniversary of the historic meeting in Jerusalem of their predecessors Pope Paul VI and Patriarch Athenagoras. That ended nearly a millennium of estrangement between those two branches of Christianity.

REV. ALEXANDER KARLOUTSOS (Greek Orthodox Archdiocese of America): In 1054, the patriarch excommunicated the papal representative, and the papal representative excommunicated the ecumenical patriarch at that time. Then there was the 1204 crusade in which the West pillaged and sacked Constantinople, creating a greater separation. There were times trying to get together just before the fall of Constantinople in 1453, but there was no dialogue from that time on.

LAWTON: Father Alexander Karloutsos is a key leader in the Greek Orthodox Archdiocese of America. He says since the 1964 meeting, there have been significant advances in Orthodox-Catholic dialogue and the sharing of some sacraments. But some important theological differences remain, especially over the role of the pope. 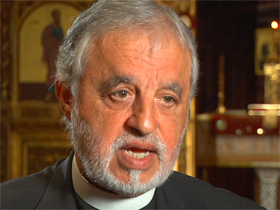 KARLOUTSOS: If it is the first among equals, the chief of the apostles, then the Orthodox Church readily recognizes that. If it’s an authoritarian, ‘I have the role of truth and no one else,’ then that’s seriously a problem that the Orthodox would have a hard time accepting.

KARLOUTSOS: When they’re praying together, it can show that people, in spite of the differences or dogmatic symbolisms, they can talk to each other in love, pray to the one Father, reach out to the brothers and sisters in the world in reconciliation.

LAWTON: Haddad says the visit will bring encouragement to Christians throughout the Middle East. In recent years, Christians have become a dramatically smaller percentage of the population, and in many parts of the region, they have faced increased persecution. 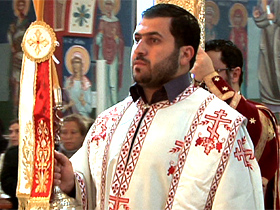 HADDAD: How can we imagine a Middle East without Christians?

LAWTON: Reverend Mitri Raheb is pastor of Christmas Lutheran Church in Bethlehem and author of the book Faith in the Face of Empire: The Bible through Palestinian Eyes. He believes a papal visit provides the opportunity for a strong demonstration of the Christian presence there.

REV. MITRI RAHEB (Christmas Lutheran Church): Usually you have all of these Christians each in their own little church, you know like small flocks that are lost here and there. And usually when he comes and everyone comes together, you feel that there is still a Christian presence in that country. This gives people just psychologically the feeling that you know, we are here.

LAWTON: It’s a message he hopes is transmitted beyond the Middle East.

RAHEB: Many still don’t know that we exist. You know, I always tease people by saying, you know, Jesus was not born in Bethlehem Pennsylvania. He was born in Bethlehem Palestine and so there has been a Christian presence in that country for the last 2000 years.

LAWTON: Although Francis has hosted interfaith meetings at the Vatican, many were disappointed that no official interreligious gatherings were planned for this trip. But the pope is traveling with a rabbi and a Muslim leader he knew in Argentina--a signal, some say, of his strong interfaith commitment. 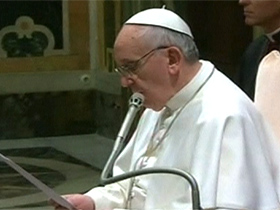 TARIN: He’s had relationships with Jewish communities, Muslim communities, for quite some time. Even before he got to the Vatican, and so I think his relations and his outreach and just his demeanor has been all about engagement. And it’s set a very positive attitude and environment.

LAWTON: Francis is meeting separately with non-Christian leaders, including the Grand Mufti of Jerusalem. Haris Tarin of the Muslim Public Affairs Council believes this will enhance Muslim-Christian relations.

TARIN: There is a false sense, a lot of times, in Muslim-majority countries, that there’s somehow a war between the West and Islam or Muslims. There’s this very false framework that’s put out there. And a lot of times, people in that part of the world feel that the West, Christianity represents the West. And so the symbol of the Pope going into the Dome of the Rock, engaging with the Grand Mufti, and meeting Muslims, will go a long way in shattering those stereotypes.

LAWTON: For the Jewish community, the pope’s visit represents an affirmation of the state of Israel and a rejection of the historic tensions between Christians and Jews. Rabbi David Rosen is international director of interreligious affairs for the American Jewish Committee. He’s based in Jerusalem.

ROSEN: Even though of course, Pope Francis has to take into account other communities and traditions that are in that land, his very encounter and embrace with Jewish religious and political leadership will be indeed a statement of this amazingly transformed blessed relationship in our times. 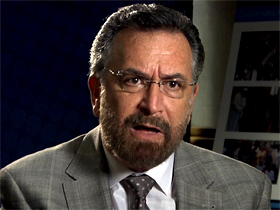 LAWTON: While many Jews loved John Paul the Second, Rosen says Francis has even closer friendships in the Jewish community.

LAWTON: With the breakdown of negotiations between Israelis and Palestinians, many are hoping the pope will use his moral influence to reignite the peace process.

LAWTON: Religious leaders admit their expectations are high, and in the thorny context of the Middle East, even the most modest of hopes can be easily dashed. Still, many say they are optimistic that if anyone can achieve the unexpected, it may well be Pope Francis.

HADDAD: I think His Holiness is bringing us hope and he is encouraging all those suffering in this region, that yes, the hope is there and peace is possible.

This weekend Pope Francis makes a pilgrimage to the region Christians call “the Holy Land” to meet with Ecumenical Patriarch Bartholomew and to try to reinforce the unity of Western and Eastern Christians. But he will also engage Jewish, Christian and Muslim religious leaders and address issues such as the diminishing number of Christians in the region and the Israeli-Palestinian peace process. “This pope,” says Haris Tarin of the Muslim Public Affairs Council, “can remind the region that dignity and peace and living together in harmony is in essence what the peace process should be about.”

Religion and Peace in the Middle East