Read an excerpt from “Soul Repair: Recovering from Moral Injury after War” by Rita Nakashima Brock and Gabriella Lettini

KIM LAWTON, correspondent: Aliyah Hunter knows firsthand the challenges facing America’s roughly 20 million veterans. She served in Iraq with the Army National Guard in 2004 and 2005 and says transitioning back was tough.

ALIYAH HUNTER (Veteran): I think that subconsciously we think that things stop and freeze when we leave. And then we come back and you know, to pick up exactly where we left off, when the reality is, life keeps going. It doesn’t stop.

LAWTON: According to the Bureau of Labor Statistics, more than three-quarters of veterans say they’ve been unable to “effectively translate their military skills to civilian terms.” About ten percent of those who served in Iraq and 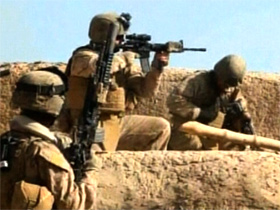 Afghanistan are unemployed, and about 13 percent of all homeless adults are vets. Many have chronic medical and emotional problems. Amid all the challenges, more and more congregations are reaching out to help. Many say it’s a moral obligation.

LAWTON: In late 2013, the Department of Veterans Affairs launched a new initiative to partner with religious groups. The VA has been sponsoring events across the country to train faith leaders about the needs of veterans and the resources that are available. Stephen Dillard is deputy director of the VA’s Center for Faith-based and Neighborhood Partnerships.

STEPHEN DILLARD (Dept. of Veterans Affairs): Nine times out of ten, our veterans they’re, they’re a member of somebody’s denomination, so we want to use them as partners to disseminate this information. 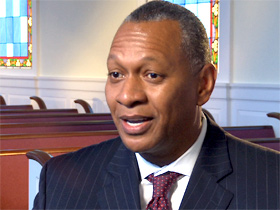 LAWTON: He says the VA understands that local congregations can be good points of contact for veterans, especially those who initially may be reluctant to seek assistance from the government.

DILLARD: They’ll see a familiar face, a face they feel comfortable with, someone they hear on a regular basis, someone they understand the ideology. So we think that would be a very good nexus for them to say okay, as a result of that, you know, let me step to my clergy, male or female, to say okay could you help me with this?

HUNTER: I’d actually been home for almost two years before I even reached out to the VA. And so once I did, I was completely blown away by the resources that they had available.

LAWTON: Ressurection Graves attended a VA training session in Northern Virginia. She leads a Christian ministry called Glory Soldiers Global and speaks to churches about how they can reach out to the homeless, including homeless vets.

RESSURECTION GRAVES (Glory Soldiers Global): There are all of these different kind of things that veterans go through that we have no idea about, if you’ve never been in the military. So we should learn more about what it is to be a veteran and what experiences they have when they try to receive services, and when we do that then we can come from a place of knowledge. 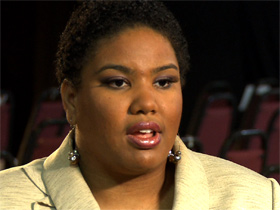 LAWTON: Graves herself was once homeless, and met her husband Deven, who is a veteran, at a shelter. They were able to overcome homelessness in part through taking advantage of Deven’s veteran benefits. Now, the ministry they founded conducts seminars in churches like Awakening Community Church in Fredericksburg Virginia. Graves says congregations need to give vets both practical and spiritual support.

GRAVES: It’s not enough to help someone to get housed, if they are still challenged with pains of the past, if they’re still going through different turmoils. And then it’s not enough to work on them spiritually and feed them and then go back to your church and say high five, we did a great job, when they’re sleeping outside.

LAWTON: Many say spiritual support from faith groups can be especially important to help vets deal with emotional needs.

LAWTON: While there has been significant research about Post-Traumatic Stress Disorder, or PTSD, a growing area of focus is on the moral injuries sustained in combat. 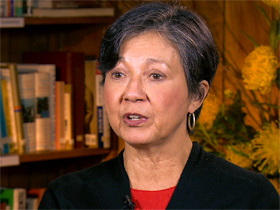 BROCK: Moral injury is the impact of serving in war when you face morally difficult or ambiguous conditions, or wind up witnessing or committing atrocities that violate your core moral values.

LAWTON: Rita Nakashima Brock is co-director of the Soul Repair Center at Brite Divinity School in Fort Worth, Texas. She says moral injury is different than PTSD, which has clearer symptoms like flashbacks, nightmares and panic attacks.

BROCK: You may have them both at the same time, which often happens in extreme terrorizing conditions, but the moral injury piece is more reflective, and it requires you to be able to tell a story and think about it. And it’s not simple.

LAWTON: She says moral injury can be different for each veteran and can result from a broad range of experiences such as second-guessing actions taken in battle, killing civilians or failing to prevent it, handling human remains, or witnessing the death of a friend and feeling survivors’ guilt. Many vets are reluctant to share their stories, even years later.

HUNTER: It’s just emotionally sometimes it’s difficult. To open up is difficult, to talk is difficult, to relate, and those are the big things that a lot of times, you know, hold us back, even from seeking services. 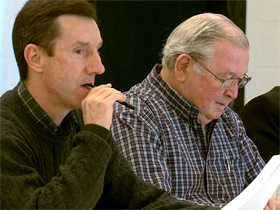 BROCK: I’ve had plenty of clergy friends say they’ve had World War II vets who had to confess something as they were dying that they’d never told anybody that they’d felt terrible about for years. So people can carry it a long time. And they can compartmentalize and not think about it for a long time.

LAWTON: The Soul Repair Center opened almost two years ago with a mission to do public education and research about moral injury.

BROCK: If you’re a moral human being, there’s a way to relate to this because I don’t know anybody who hasn’t done something they feel pretty terrible about still, and if you magnify that about a hundred fold, you get a little clue as to what it’s like to carry a load called moral injury.

LAWTON: The center also trains clergy and local religious leaders on how to help vets and others try to recover from moral injury. Former Army chaplain and current Presbyterian pastor Greg Brown attended a training event in Raleigh, North Carolina.

REV. GREG BROWN (Covenant Presbyterian Church): This is something that we really haven’t addressed quite adequately before because we’ve been addressing PTSD. And there’s a vast difference between PTSD and the moral issues of war.

BROCK: Sometimes a little counseling will help, but to rebuild a moral identity takes a community of support. It takes friends and it takes a long time. There are no other institutions in our society that I know of except religious institutions that support people over their entire life course.

HUNTER: I believe in prayer and so that was, was my peace and it, and it was a tool to go along with everything that the VA offers to help me see this through, and to say that, you know, things can be better.

"We Must Journey With Them" 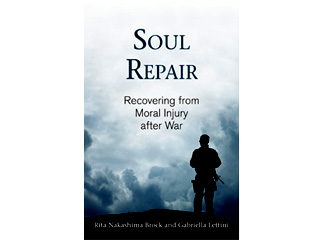 Veterans need each other, and they may never share with the rest of us what they share with each other. But they also need the civilians in their lives, those of us with whom they must learn to live again. To listen to veterans requires patience with their silence and with the confusion, grief, anger, and shame it carries. We must be willing to listen carefully without judgment and without a personal agenda. We must understand that respect for veterans requires us not to patronize them by trying to be their therapists—we do not hold the key to their redemption. It is not for us to forgive them but to help them find ways to forgive themselves and to let them know their lives mean something to us and to others. Finally, we must be willing to engage their moral and theological questions with openness and to journey with them as we are mutually transformed in the process.

Many religious communities have historical traditions that have long understood the suffering of soldiers and the moral transgressions that threaten souls, not just in the individual but also in the whole community. Traditions too focused on judgment and punishment of wrong doers or too facile in answering core questions about evil offer little and can even aggravate moral injury. But people of faith who are willing to wade into the complex moral questions of war and social responsibility and discern the meaning of spiritual life after war can engage the conversations that matter deeply and, in doing so, save lives.

War veterans return home from duty to the communities and families they left behind, but mental and emotional burdens often return with them. Decisions and experiences from the battlefield can lead to post traumatic stress and what is now being recognized as moral injury. The Department of Veterans Affairs is sharing its resources with faith groups to help those returning with deep moral wounds. “To rebuild a moral identity takes a community of support. It takes friends, and it takes a long time,” says Rita Nakashima Brock of the Soul Repair Center at Brite Divinty School. “There are no other institutions in our society that I know of except religious institutions that support people over their entire life course.”